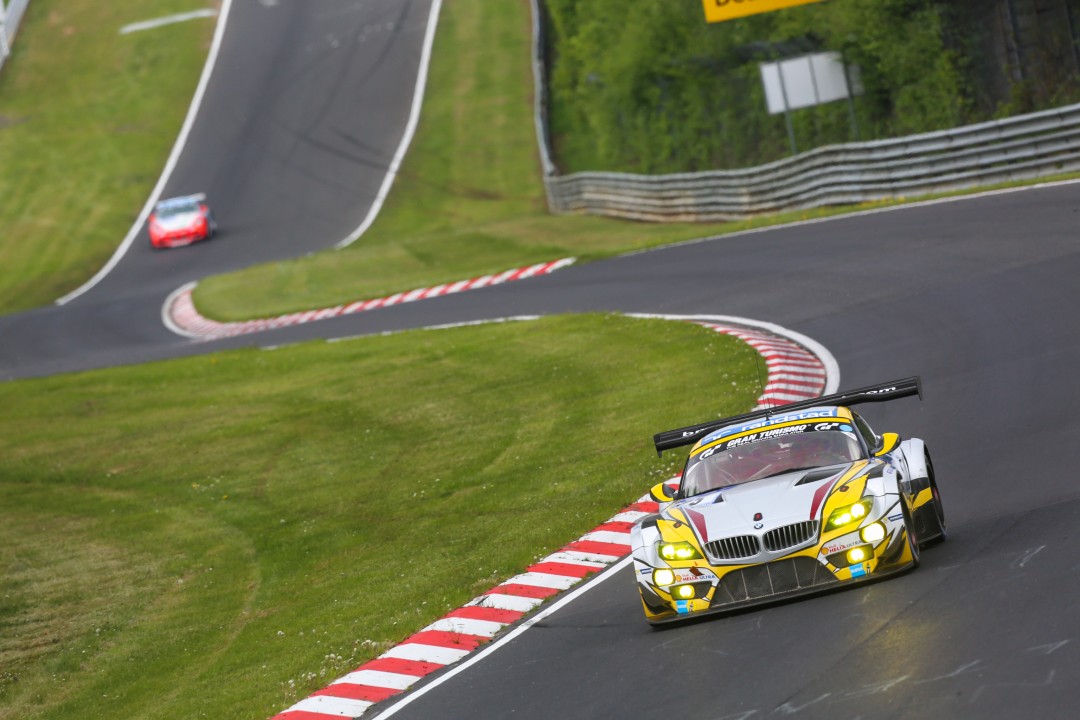 The top teams keep on stealing one another the lead.  Depending on their scheduled pit stops, the Audi Sport Team WRT Audi R8 LMS (#28) and the BMW Sports Trophy Team Marc VDS BMW Z4 GT3 (#25) alternate at the very top, in the 16th and 17th hours of the 43rd ADAC Zurich 24h Race. At 09:00hrs, the BMW holds a 53.615-second lead over the Audi. The Falken Motorsport Porsche 911 GT3 R (#44) follows in third position, 3:25.993 minutes behind the leader and ahead of the Black Falcon Mercedes-Benz SLS AMG GT3 (#5) in fourth. At sunrise, the conditions at the 25.378-kilometre combination of  GP circuit and Nordschleife are virtually perfect. This fact is demonstrated by the new fastest race lap set by the leaders’ sister car (#29) that crosses the line in 8:20.770 minutes, at 08:54hrs.

5 – Bin Turki Al Faisal / Haupt / Buurman / van Lagen (Mercedes-Benz SLS AMG GT3)
07:05hrs
Technical Director Marin Wagner: “In the night, the emergency locking of the passenger door suddenly opened. Therefore, we had to come in for an unscheduled stop. In addition, we had shod the car with the wrong tyres for the weather conditions.”
08:15hrs
Yelmer Buurman: “The conditions were great. The track is really fast, now. The car’s balance is very good but in the second part of my double stint I had to cope with a lot of traffic.”

9 – Lauck / Franchitti / Jahn / Mailleux (SCG 003c)
07:00hrs
Pits with fire on the rear. The fire is extinguished and the car pushed into the garage.
07:08hrs
Manuel Lauck: “The power steering failed all of a sudden – and all the electronic systems too. I assume that these problems were caused by the alternator. The idler pulley locked, the V belt disengaged and damaged several cables. Repairing the damage certainly will take us 45 minutes, an hour or more.“
08:01hrs
The repair works have been completed, the car is pushed out of the garage, refuelled and rejoins the race – with Manuel Lauck at the wheel and accompanied by the applause of the mechanics.

18 – Walkenhorst / Oeverhaus / Bollrath / Aust (BMW Z4 GT3)
08:02hrs
Ralf Oeverhaus for Henry Walkenhorst. “There currently are a lot of accidents. Our strategy is to drive carefully and make it to the finish. More often than not, the retirements aren’t caused by technical failures but by accidents.  We want to secure a top-15 result with the #18 and a top-five result with the #17.

23 – Graf / Hohenadel / Bastian / Jäger (Mercedes-Benz SLS AMG GT3)
07:18hrs
Pits for tyres.
08:32hrs
Pit stop with driver swap – Bastian for Hohenadel. Rear brakes are changed.
08:48hrs
Christian Hohenadel: “We really aren’t the lucky ones, this weekend. We have lost our third gear and that’s a gear you need rather often, here. Early in the morning, we had another impact and therefore, the track also isn’t okay. There isn’t a chance of gaining ground but we want to try to defend our position. We hope that the car will make it to the finish.”

26 – Farfus / Müller / Catsburg / Adorf (BMW Z4 GT3)
07:29hrs
Müller for Adorf.
07:37hrs
Dirk Adorf: “The night was exciting for us as we had a fire while refuelling the car around midnight. This incident cost us nearly a lap. But the car runs so flawlessly that we were able to make up for the lost ground, over the course of the night. There currently are a lot of yellow-flag periods. You can see that many drivers are getting tired.”
08:50hrs
Pit stop. Jörg Müller stays in the cockpit for a second stint.

33 – Huff / Heyer / Frommenwiler / Krognes (Mercedes-Benz SLS AMG GT3)
08:31hrs
Heyer for Frommenwiler. Kenneth Heyer: “The car runs superbly and without problems. I had a slight encounter in the Schwalbenschwanz area – but without any consequences.”

44 – Dumbreck / Henzler / Ragginger / Imperatori (Porsche 911 GT3 R)
07:13hr
The second-placed Porsche pits following a nine-lap stint.
07:20hrs
Alexandre Imperatori takes over from Peter Dumbreck. Dumbreck: “We had some critical moments in the night as some competitors decelerated too hard for double-yellow zones and continued at less than 60kph. This behaviour nearly resulted in rear-end collisions, Now, the circuit is really fast.”
08:38hrs    Ragginger for Imperatori.