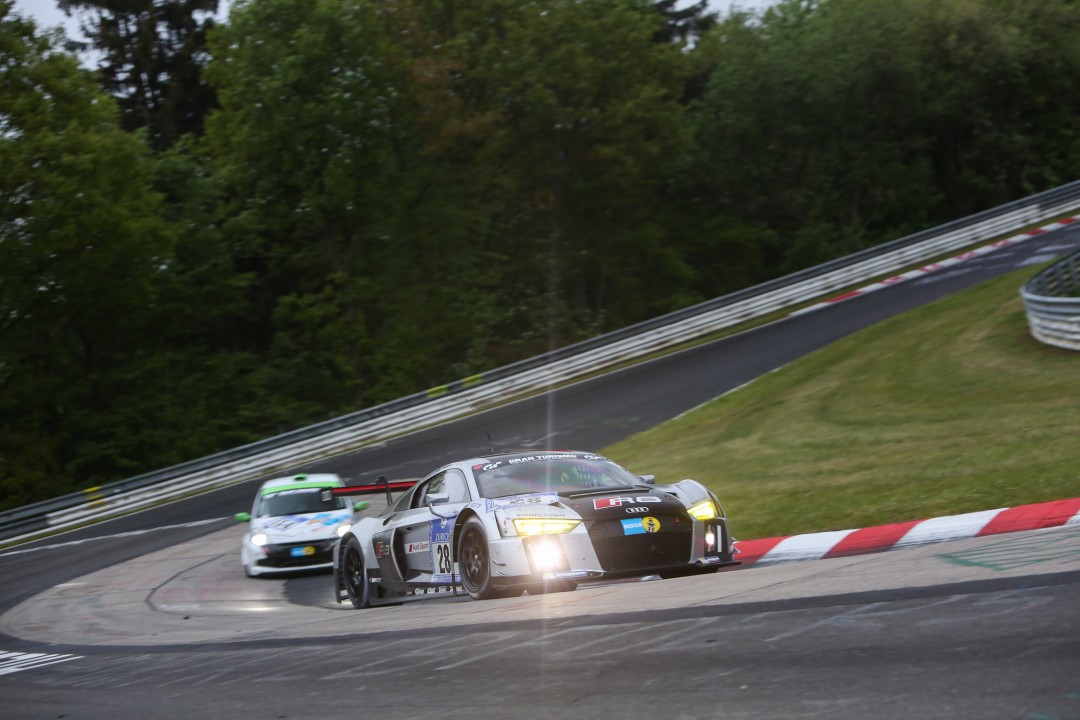 The winners of the 43rd ADAC Zurich 24h Race are Christopher Mies, Edward Sandström, Nico Müller and Laurens Vanthoor. After 24 hours, Mies took the chequered flag with the Audi R8 LMS (#28) entered by the Audi Sport Team WRT as race winner. At the end of the 156 lap race at the Nürburgring Nordschleife, his lead over Maxime Martin in the BMW Z4 GT3 (#25) added up to 40.729 seconds. Behind the BMW, Peter Dumbreck, Wolf Henzler, Martin Ragginger and Alexandre Imperatori took the Falken Motorsports Porsche 911 GT3 R to third place.

5 – Bin Turki Al Faisal / Haupt / Buurman / van Lagen (Mercedes-Benz SLS AMG GT3)
15:02hrs
The last driver swap: Yelmer Buurmann takes over from Jaap van Lagen to contest the final stint.
15:10hrs
Jaap van Lagen: “We hold a top-five position and are really happy with what we have achieved so far. Prior to the start we didn’t expect to be able to achieve such a good result in this competitive field. But we didn’t make any mistakes and the car ran better and better throughout the race.”

9 – Lauck / Franchitti / Jahn / Mailleux (SCG 003c)
15:14hrs
Last driver swap: Lauck replaces Franchitti for the final stint.
15:15hrs
Comes back in a short time later and is pushed into the garage.
15:22hrs
Latest information from the team: the power steering failed and there’s no battery voltage.
15:43hrs
Still standing in the garage but will rejoin the race in a moment. The team has not yet solved the problem but wants to take the chequered flag at any price.
15:53hrs
The entire pit-lane applauds the Glickenhaus squad that succeeded in push-starting the car with their last bit of strength!

21 – Schulze / Schulze / Strauß / Tresson (Nissan GT-R nismo GT3)
15:15hrs
With just 45 more minutes to go, gearbox problems force the independent Nissan team to retire from 13th place.
15:19hrs
Has rolled to a halt in the Klostertal section due to gearbox problems.
15:42hrs
Michael Schulze: “The car won’t come back. We set ourselves the goal to secure a top-10 result and it goes without saying that we are very disappointed, now.”

65 – Kolb / Denat / König / Rocco (Porsche 997 GT3 Cup)
15:07hrs
Stopped following a collision with car #308 in the Mercedes-Benz Arena.
15:34hrs
The team changes the radiator that was damaged in the accident. They absolutely want to take the chequered flag.