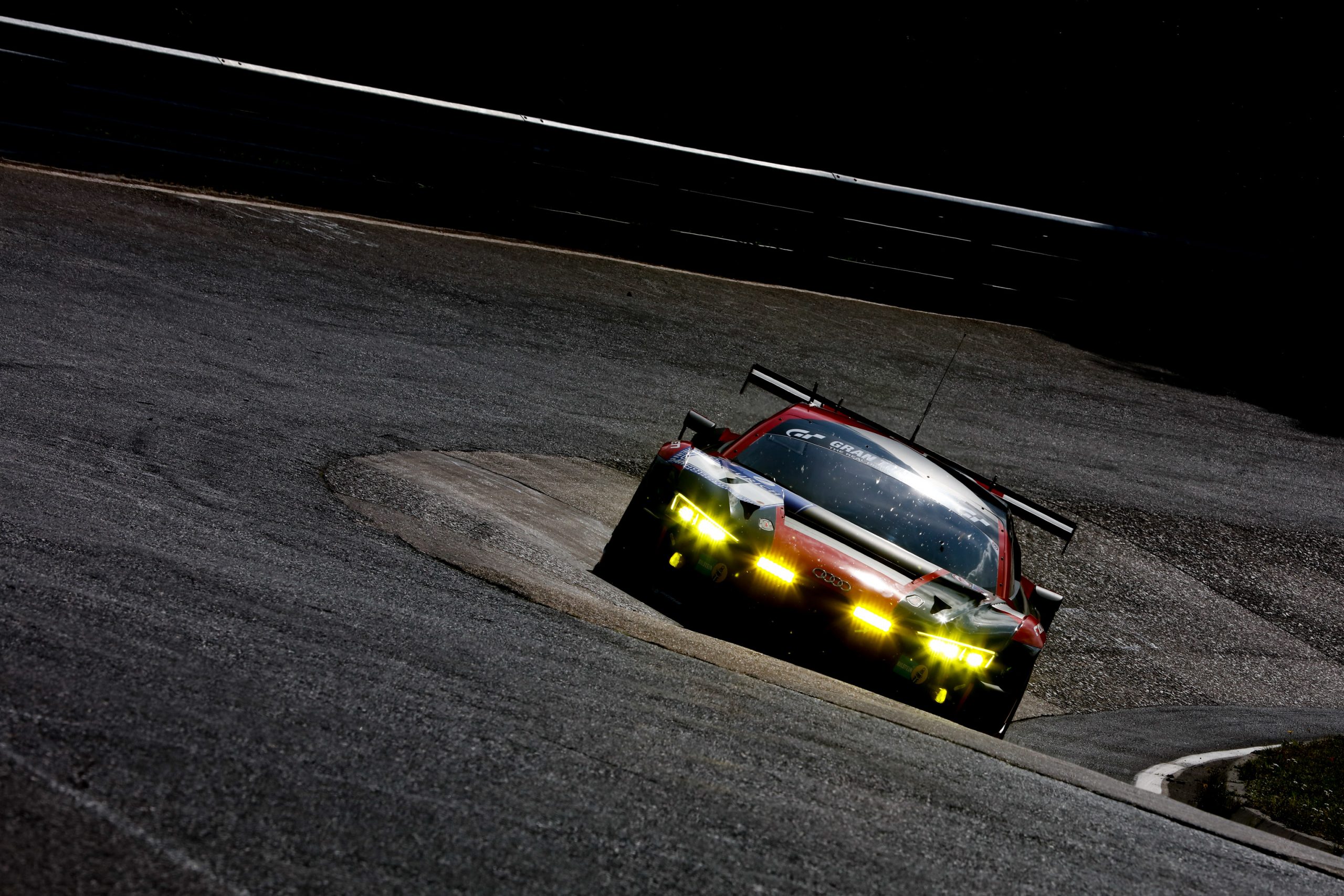 The reigning champions are back on top: in the first qualifying session for the 44th ADAC Zurich 24h Race at the Nürburgring, the four drivers racing for Audi Sport Team WRT – last year’s winners Laurens Vanthoor (BEL), Christopher Mies (Germany) and Nico Müller (SUI) who will be supported by Pierre Kaffer (Germany), this year – took the Audi R8 LMS #1 to provisional pole by crossing the line in 8:21.951 minutes. But it has to be admitted that the hunt for fast lap was hampered by heavy rain that began to fall in the second hour of the session.
“It definitely is nicer than being 35th on the time sheets,” Pierre Kaffer said when Laurens Vanthoor had set the fastest lap time. “But the competitiveness level on this year’s grid is extremely high and due to the rain, the time sheets don’t really reflect this situation. Laurens Vanthoor was the last driver to have crossed the line on a dry track and so, our rivals certainly will be able to also up the ante. At the Nordschleife it doesn’t matter if you have to cope with light or heavy rain – you always have to be careful. But it goes without saying that it’s nicer for us and the fans when it’s dry.”
Audi and Mercedes-AMG the fastest rivals
Second and third positions on the time sheets were secured by the Twin Bush Motorsport Audi R8 LMS #16 raced by Marc and Dennis Busch (Bensheim), Christian Mamerow (Waltrop) and Rene Rast (Stolzenau) who crossed the line in 8:23.166 minutes as well as Kenneth Heyer (Viersen), Sebastian Asch (Ammerbruch), Luca Ludwig (Bornheim) and Daniel Keilwitz (Villingen-Schwennigen) with the Mann-Filter-Team’s Mercedes-AMG GT3 #75 that completed the 25.378-kilometre lap on the racetrack consisting of the GP circuit and the legendary Nordschleife in 8;23.300 minutes.
When the torrential rain began to fall this meant the end for the hunt for fast lap times. On the other hand, the teams now had the opportunity to already gather experiences in these difficult conditions. On Friday morning, from 09:30 to 11:30hrs, the race action will be continued with the second qualifying session that will determine who will be the last 13 teams to join the 17 that already made it to the Top 30 Qualifying in the first three VLN rounds and the 24h Race Qualifying Race. And in the Top 30 Qualifying, on Friday evening from 19:50 to 20:30hrs, the 30 fastest teams will fight for the positions on the first 15 rows of the grid for the race on Saturday (Start at 15:30hrs) in the individual time-trial format.
The coming 24h-Race action in the ‘Green Hell’ can be followed live and at close range even by those motor-racing enthusiasts who haven’t got the opportunity to make the trip to the Eifel. RTL NITRO will cover both the Top 30 Qualifying on Friday and the entire race live – the latter in a 26-hour non-stop coverage. Furthermore, everything important on the 44th ADAC Zurich 24h Race including live timing, live ticker and video streams from 13 different perspectives at www.24h-rennen.de.