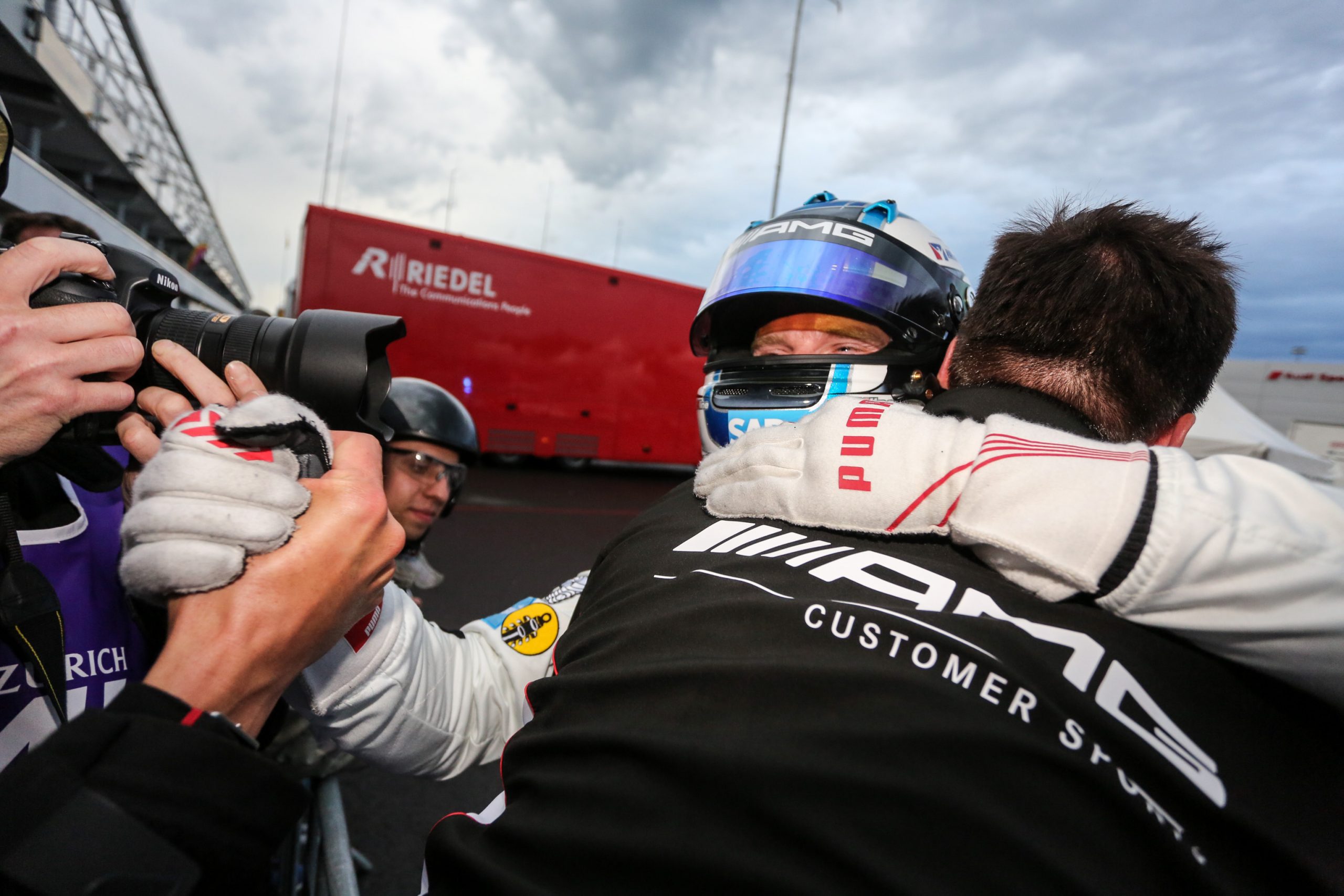 Maro Engel secured the prestigious ADAC Zurich 24h-Race pole position for the AMG-Team Black Falcon. Engel who was lucky in the draw and consequently was the first to go out for his two flying laps in the Top 30 Qualifying on Friday evening. And on his second flying lap, Engel and his Mercedes-AMG GT3 #9 crossed the line of the 25.378-kilometre combination of Nordschleife and GP circuit in 8:14.515 minutes, thus outqualifying the entire field. This means that he and his team-mates Hubert Haupt, Yelmer Buurman and Dirk Müller will start into the tradition-rich Eifel marathon from pole position. And although the pole isn’t of particular significance in a 24h race, it still is a minor psychological success in the battle of the top-class endurance-racing teams.
The position in the first row next to the Black Falcon squad on the grid for the legendary race will be held by Augusto Farfus, Jesse Krohn, Jörg Müller and Marco Wittmann. With a lap time of 8:16.146 minutes, Brazilian Farfus in the Schubert Motorsport BMW M6 GT3 was 1.6 seconds slower than Engel. Third and fourth positions were secured by the two Haribo-Mercedes racers that will contest the race with the same driver line-up. Uwe Alzen secured third position on the grid with car #88 with an 8:18.380-minute lap and his team-mate Maximllian Götz in the #8 was just 15 hundredth of a second slower (8:18,530 minutes).
According to Engel, tyre preparation was the key factor
“A big thank you to Team Black Falcon,” Engel said after his amazing lap. “The car was just perfect. I think, the key factor for today’s success was the fact that we prepared the tyres perfectly. As you could see due to the numerous off-track moments, the conditions were really difficult. I also had a moment of shock on my out lap and jack-knifed massively. Now we will have free vision at the start.” The race will be started on Saturday at 15:30hrs and the fans who couldn’t make the trip to the Eifel can watch the 24h-Race action live on the free-to-air TV station RTL NITRO – and in addition it is streamed live at www.24h-rennen.de.
Bad luck for the reigning champions and car #1.
Pierre Kaffer who contested the Top 30 Qualifying for reigning champions Audi Sport Team WRT in the Audi R8 LMS #1 had to return to the pits due to a tyre puncture, could complete only one flying lap and had to settle for finishing 22nd. And the hopes of Porsche driver Kevin Estre in the Manthey-Porsche #911 and Christian Mamerow in the Twin-Busch-Audi #16 came to an even earlier – before the hunt for the best lap times really had begun. Both hit the crash barriers as early as on the out lap. Later in the session, Luca Ludwig in the Zakspeed-Mercedes #75 and Nicky Catsburg in the Rowe-BMW #2 also lost it and hit the crash barriers, with Catsburg’s time set on his first flying lap being good enough for seventh position on the grid, nevertheless.