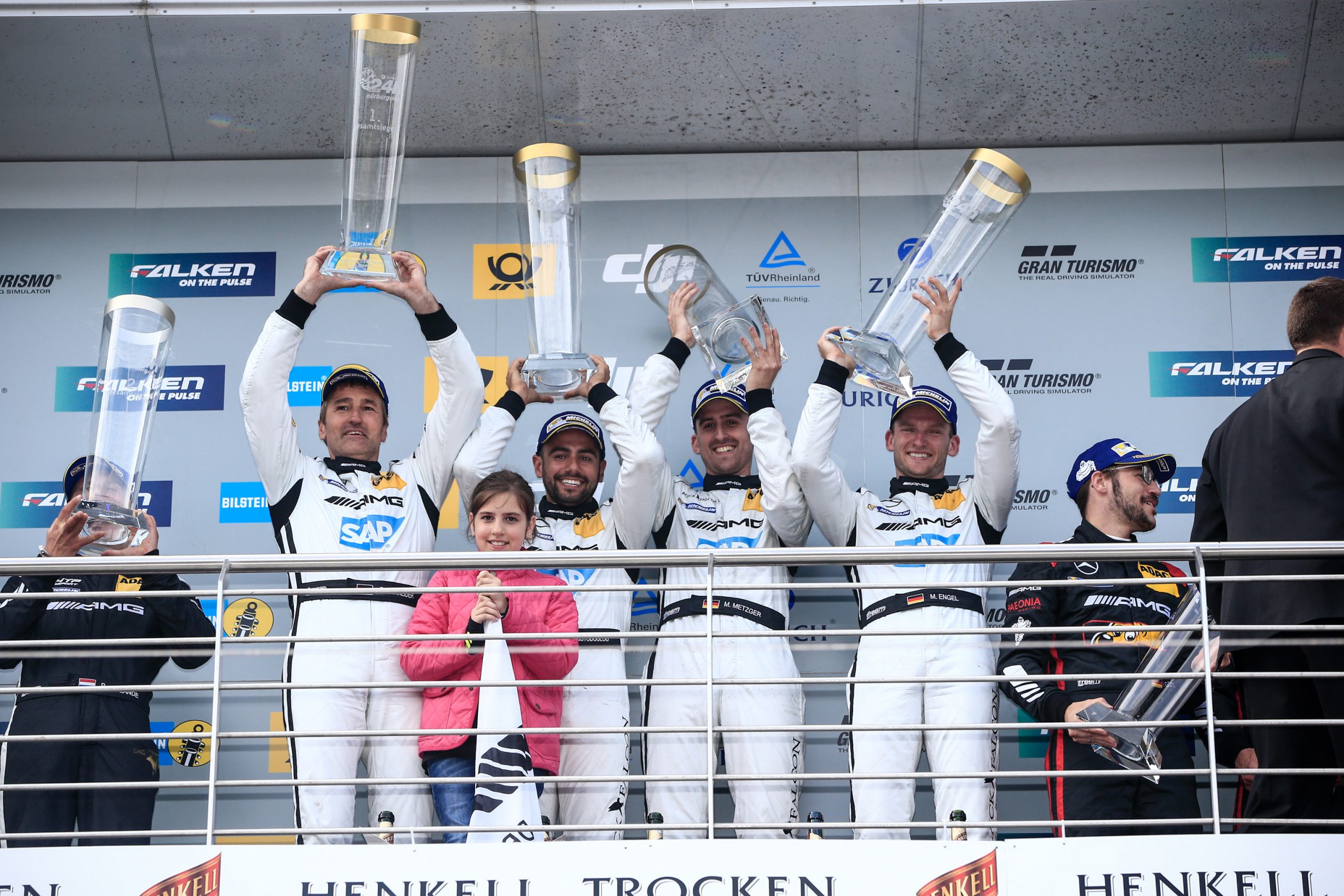 An amazing race that will be remembered for a long time. Please find below what the drivers of the top-placed teams in the 44th ADAC Zurich 24h Race had to say.
Maro Engel (Winner): “To have won this 24h race means a huge dream come true. It’s just incredible to be sitting here and celebrate the win with these three guys. I’m truly overwhelmed. I have been pushing to the max all the time but there was so much traffic. I came close to despairing. But then I was offered the chance. I exited the Dunlop Kehre on a better line and also was faster in the Schumacher-S and so I was right behind him. I think Christian also was aware of the situation. I assume that he looked into his rear-view mirror. He had the possibility to close the door at the inside – but he didn’t and moved to the right, instead. That was my possibility to brake into the inside. I was aware that if I was going to make a move it had to be a clear move. This meant that I had to put my car completely next to his – and I did so. Then, when I was next to Christian, he turned in and hit me at the rear area of my fender. I can understand his disappointment. Had I lost the race win on the final lap I also would feel sad. Chris and Renger are good friends of mine. I’m really sorry. But I think they knew that I would try to make a move, being that close behind. There was no order to try not
Adam Christodoulou (Winner): “To have won with the entire team is just incredible. When Maro passed Christian I shouted so loud that my voice is nearly gone, now. We demonstrated that you always should give your very best and push to the very end. Finally all the perseverance and all the work of the past years have paid of.”
Manuel Metzger (Winner): “The VLN title already was outstanding but to be here, in the 24h Race, on the top step is just incredible. I’m really proud that the team put its trust in me, thus allowing me to demonstrate what I’m able to achieve. The key to the success this time was the reliability of the entire team.”
Bernd Schneider (Winner): “The competition was clearly tougher than last year. Just take a look at what was going on in the Top 30 Qualifying. The lap times an cornering speeds were just incredible, this time. The work with the team was huge fun. As we weren’t too successful, in 2015, everybody all the teams collaborated to the max, this year. In the race however, it was every team for itself. It’s easy to understand that the team that didn’t win is disappointed but if you see a chance of clinching the win you just have to make use of it. This will be my arguably last win. It was an incredibly tough race. With five perfectly prepared cars, Mercedes-AMG was extremely competitive as team. And the brand-internal competition represented an additional motivation.”
Christian Vietoris (second): “We are truly disappointed to have lost the 24h-Race win on the final lap. We always were among the front-runners. Surviving the opening stages unharmed already represented an achievement. After the retirement of our sister car, we were supported by the entire team. The last hour was truly nerve-wracking. I’m just proud of being part of this team. Currently, the disappointment predominates but now I’m going to sleep and next week, I will travel fully motivated to the DTM race meeting at the Lausitzring.”
Lance David Arnold (Third): “The fact that everybody was racing the same material and all the teams could rely on the services of a top-class driver line-up made thinks so much more difficult. every driver line-up was. To overtake somebody who is as good as you as a driver and races the same car actually is virtually impossible. But joking aside, the performance of our Mercedes-AMG GT3 racers was just great. And the fact that the major part of our competitors eliminated themselves definitely also represented an advantage for us. The car ran flawlessly to the chequered flag – just great.”
Maximilian Götz (third): “Haribo did a fantastic job. We held the first and second positions for a long time. Lance had a close encounter with an Audi in the night but this didn’t mean a disadvantage for us. It was great to see that we partly were able to really outpace the others.”
Jan Seyffarth (Third): “This race will make history for two reasons: the closest finish and the earliest red-flag period. In such a situation, you of course think about the spectators that are camping out there for a week. We had a tough time in those difficult conditions. That alone is a reason to be happy about having come through. The guys and girls that stuck the 24 hours out – in rain, hail and everything else they had to cope with – deserve my full respect. They are the true motor-racing enthusiasts, that is the Nürburgring. That’s why the people come here and that’s why we produce this show.”
Uwe Alzen (Third): “We are extremely proud of finally having made it to the podium. Thanks to the entire Haribo squad that did a perfect job – just as my team-mates that drove flawlessly throughout the race. We have been among the top three for 20, actually even for 24 hours. We all had a lot of fun and cooperated really well. To have made it to the podium in the end was a great reward. I hope that we will continue to possibly also contest the 2017 edition with two cars.”