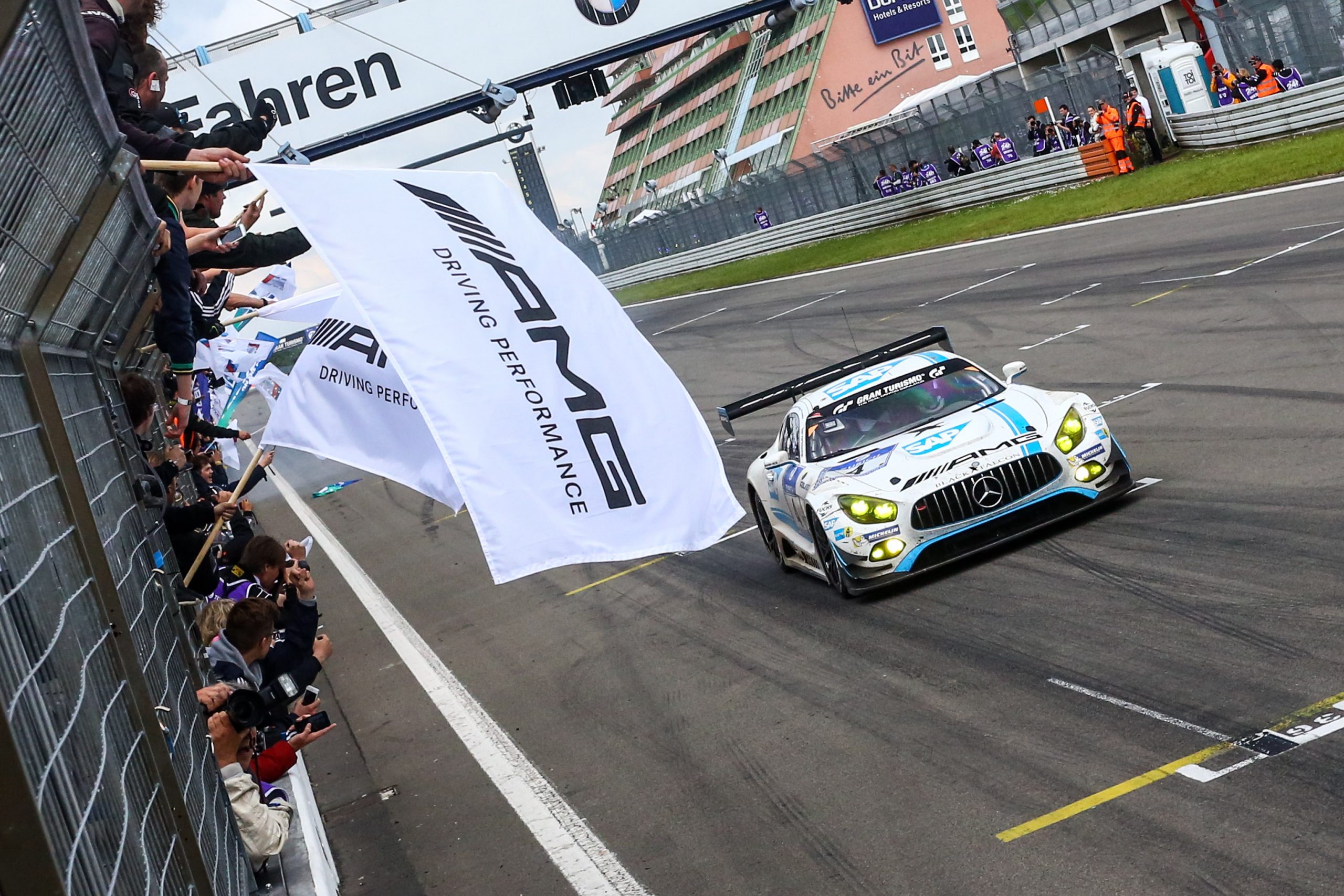 Great moment for Mercedes-Benz Eifel. In the memorable 44th ADAC Zurich Mercedes-AMG, the Stuttgarters celebrated a one-two-three-four, spiced up by a last-minute win. In the end, the AMG-Team Black Falcon #4 raced by Bernd Schneider, Maro Engel, Adam Christodoulou and Manuel Metzger won the race after 3,400.65 kilometres with a 5.697 second lead, followed by another three Mercedes-AMG GT3 vehicles. With a fantastic final spurt, Maro Engel passed the previously leading Christian Hohenadel in the HTP Mercedes AMG GT3 #29 with a tough move on the GP circuit to then defend the lead and secure the closest win in the 47 years of the event’s history by defending the lead until he took the chequered. So, Hohenadel and his team-mates, Christian Vietoris, Marco Seefried and Renger van der Zande, had to settle for finishing second. Information on the 24h Race at www.24h-rennen.de.
In front of 185,000 spectators, Mercedes did not only celebrate their second 24h-race success after 2013 but also clinched the best result for a manufacturer since BMW secured all the six top positions in 1998. Behind the four Mercedes-AMG vehicles, BMW (fifth), Bentley (seventh), Audi (eighth) and Porsche (ninth) four other manufacturers also made it to the top 10.
Second triumph for Bernd Schneider
“Incredible that Maro succeeded in making it. I’m lost for words. A just phenomenal feeling. I hadn’t believed that we would be able to turn the table. But I think we deserved it. We had a good race from the lights to the flag. I am giddy with excitement,” said the DTM Record Champion following his second 24h-Race success after 2013. Three years ago, he also won the race with Black Falcon. And now, Mr DTM and his colleagues – and the Mercedes-Benz SLS AMG GT3 – added a second triumph to the one secured in 2013 with the predecessor, Mercedes-Benz SLS AMG GT3.
For a long time, the HTP squad succeeded in avoiding getting involved in any battles or critical situations. But a final pit stop with some 9:30 minutes to go cost them the oh so close win in the legendary endurance race. Hohenadel who drove their final stint succeeded in rejoining the race a few seconds ahead of Engle but wasn’t able to fend his pressurising fellow Mercedes-Benz driver off.
Third position was secured by the Haribo Racing vehicle #88 raced by Uwe Alzen, Lance David Arnold, Maximilian Götz and Jan Seyffarth and the second Black-Falcon car (#9) that was raced by Engel, Hubert Haupt, Yelmer Buurman and Dirk Müller came fourth. .
For the major part of the race, the Mercedes armada was involved in a brand-internal battle for the race win. 32 times, the previous leader was stolen the lead. And the two BMW M6 GT3 run by Rowe Racing and driver Markus Palttala as well as Schubert Motorsport with driver Jörg Müller as well as a Manthey Porsche 911 GT3 R driven by Fred Makowiecki were the only race leaders without a star.
Rain and hail force the race control to red-flag the race
But all the drivers and fans also will remember the 2016 edition of the endurance classic due to the thunderstorm on Saturday, short after the start. Within a few minutes, rain and hail turned the track into a slide and consequently in to a big car park. As the safety of the drivers couldn’t be guaranteed and even 500bhp racing cars weren’t able to go uphill on the partly glassy track, Race Director Warter Hornung made the only appropriate decision: to red-flag the race. But despite numerous incidents in the minutes before this decision, nobody was hurt. More than an hour went by before all the cars were back in the pits and some three hours until the race could be restarted.