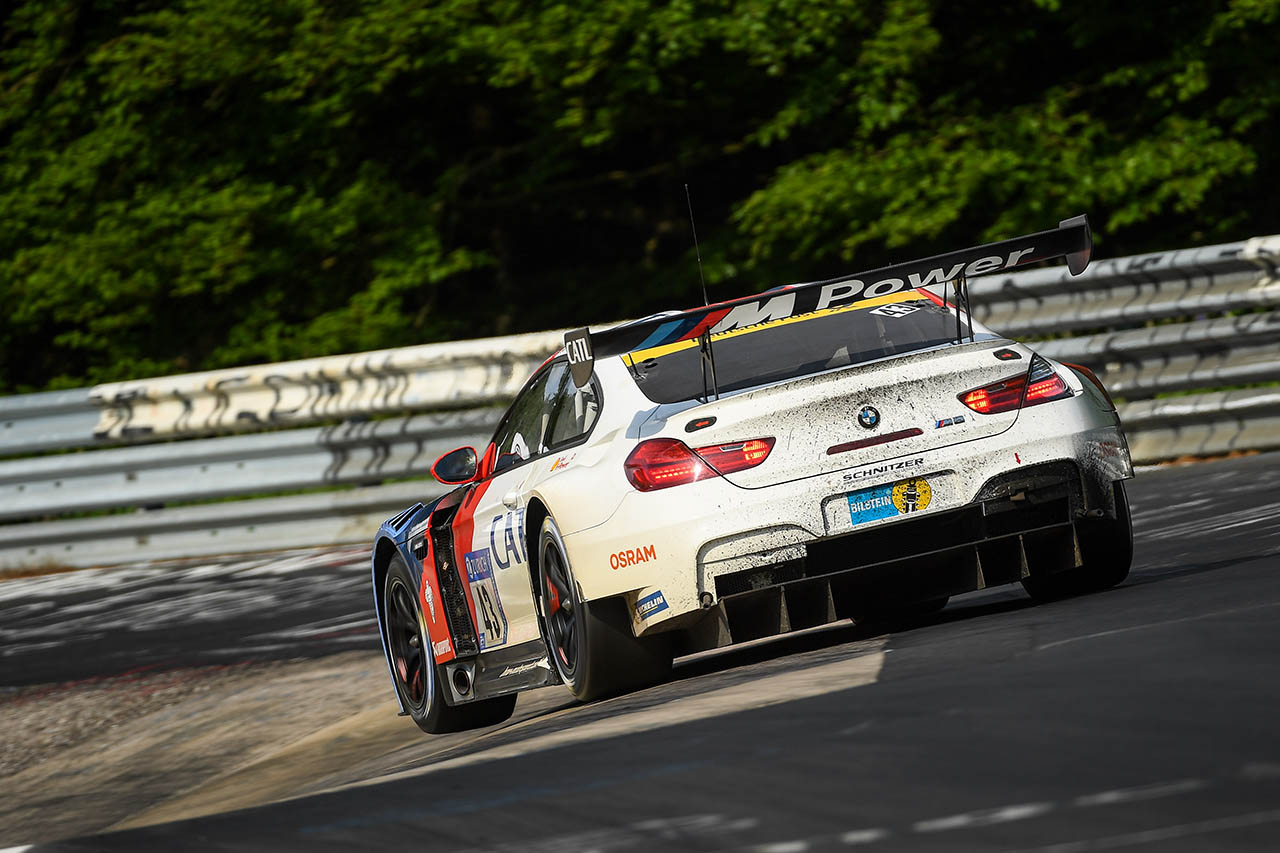 19 hours into the race the two Audis still are the dominating leaders of the 45th ADAC Zurich 24h Race. The Land vehicle #29 leads, 1.26.301 ahead of the WRT R8 LMS #9.  Meanwhile, BMW had to cope with bad news: following an accident, the previously partly third-placed BMW M6 GT3 (#43) of BMW Team Schnitzer Motorsport dropped out of the contention for a podium position. Consequently, Rowe Racing (#98) and Falken Motorsports (#33) gained a position. However, their gap to the leaders amounts to a lap. And while the race to date was held in perfect conditions, fans and drivers now nervously observe the sky. The weather forecasters expect thunderstorms for the time around noon – what could massively jumble the order.
1 – Engel / Christodoulou / Buurman / Metzger (Mercedes-AMG GT3)
09:06hrs Metzger for Buurman.
09:11hrs Buurman: “Driving the car feels nice. I think that we are slightly slower than Audi and BMW. With just six more hours to go, attacking now will be difficult. We would need a dose of luck.”
4 – Haupt / Al Faisal / Stolz / Juncadella (Mercedes-AMG GT3)
08:57hrs Hubert Haupt gets behind the wheel.
09:19hrs Pit stop.
8 – Alzen / Arnold / Götz / van der Zande (Mercedes-AMG GT3)
10:24hrs Pit stop, Maximilian Götz remains in the car for the second half of a double stint.
19 – Klingmann / Müller / Edwards / Onslow – Cole (BMW M6 GT3)
09:02hrs Onslow-Cole for Edwards.
10:15hrs Scheduled stop. John Edwards remains in the car to complete his double stint.
10:23hrs Torsten Schubert: “We currently hold sixth position, with #19. A position we can’t be happy with. We wanted to be a factor in the battle for the win but failed to achieve this goal. But we hope that our BMW colleagues will be able to attack the two leading Audis.
22 – Weiss / Kainz / Keilwitz / Krumbach (Ferrari 488 GT3)
09:55hrs Oliver Kainz for Georg Weiss.
29 – De Phillippi / Mies / Winkelhock / van der Linde (Audi R8 LMS)
08:37hrs With 8:22.120 minutes, the current leaders set a new fastest race lap.
09:22hrs Kevin van der Linde for Christopher Mies.
09:31hrs Mies: “Yes, we are followed by another Audi but at the end of the day we both want to win the race. And don’t forget the BMW behind us. So, the race is not yet over. We are just discussing which will be the next car I will race in.  Here or in the #28? But currently the #29 has got priority.”
30 – Abbelen / Schmitz / Ziegler / Müller (Porsche 911 GT3 R)
09:14hrs Stops for fresh tyres, fuel and new brakes. Andreas Ziegler to drive the next stint.  .
09:19hrs Sabine Schmitz: “My stint was fine but there were a lot of incidents, out there, The tyres still work well but in the closing stages of a stint it’s getting more difficult.
10:28 Uhr Driver swap Klaus Abbelen for Ziegler
31 – Christensen / Bachler / Siedler / Luhr (Porsche 911 GT3 R)
09:54hrs Lucas Luhr for Klaus Bachler, Bachler: “Driving this stint was big fun. The track is good, the car runs flawlessly. We are positioned between eighth and tenth position. There still are six hours to go and we wouldn’t mind to continue this way.”
37 – Brück / Menzel / Verdonck / Jöns (Bentley Continental GT3)
09:39hrs Christian Menzel for Christer Jöns.
42 – Wittmann / Blomqvist / Tomczyk / Farfus (BMW M6 GT3)
08:52hrs Martin Tomzcyk for Blomqvist.
43 – Farfus / Lynn / Felix Da Costa / Scheider (BMW  M6 GT3)
10:13hrs Farfus who was battling out for a podium finish crashes in the Breitscheid area. The car is standing and must be towed away. Team-mate Timo Scheider: “Augusto apparently had a close encounter with another car, resulting in a close encounter. The result: more than just damaged tyre. Suspension parts also seem to be broken.”
98 – Palttala / Catsburg / Sims / Westbrook (BMW M6 GT3)
09:37hrs Team Principal Hans-Peter Naundorf: “If you have been one of the front-runners you must have done many things right. Nonetheless, we believed that we would be able to pressurise the Audis on a higher level. Nonetheless we are close together and still a lot of things can happen.”
10:03hrs Scheduled stop for fuel and driver swap. Richard Westbrook for Markus Palttala: “We have got no problems, the car is running perfectly. But it’s difficult to still try to in the race. Nonetheless, all the drivers are highly motivated. We are swapping the drivers every hour, now.”
99 – Eng / Sims / Martin / Basseng (BMW M6 GT3)
09:44hrs Philipp Eng for Maxime Martin.. Maxime Martin: “We currently have no problems. But we are far behind and can’t make up for the lost ground, But there are some other BMWs among the front runners.
702 – Mutsch / Piccini / Laser / Mailleux (SCG SCG003C)
09:39hrs Thomas Mutsch for Andrea Piccini.
09:51hrs Andrea Piccini: “The car is running well but we are hampered by the well-known refuelling problem. It’s a pity that the team won’t be fully rewarded as our pace is competitive. A double stint isn’t easy as driving this car is very exhausting. And now, the temperatures are rising again.”
704 – Westphal / Mailleux / Simonsen / Laser (SCG SCG003C)
08:42hrs Franck Mailleux: I had a lot of Code-60 zones. Some teams are driving rather slowly but we really go for it. The car running well and without the close encounter in the early stages we possibly could hold a top-five position.”
09:54hrs Andreas Simonsen rein – Felipe Laser.
10:04hrs The Glickenhaus goes off the track while approaching the Adenauer Forst and skids across the grass.