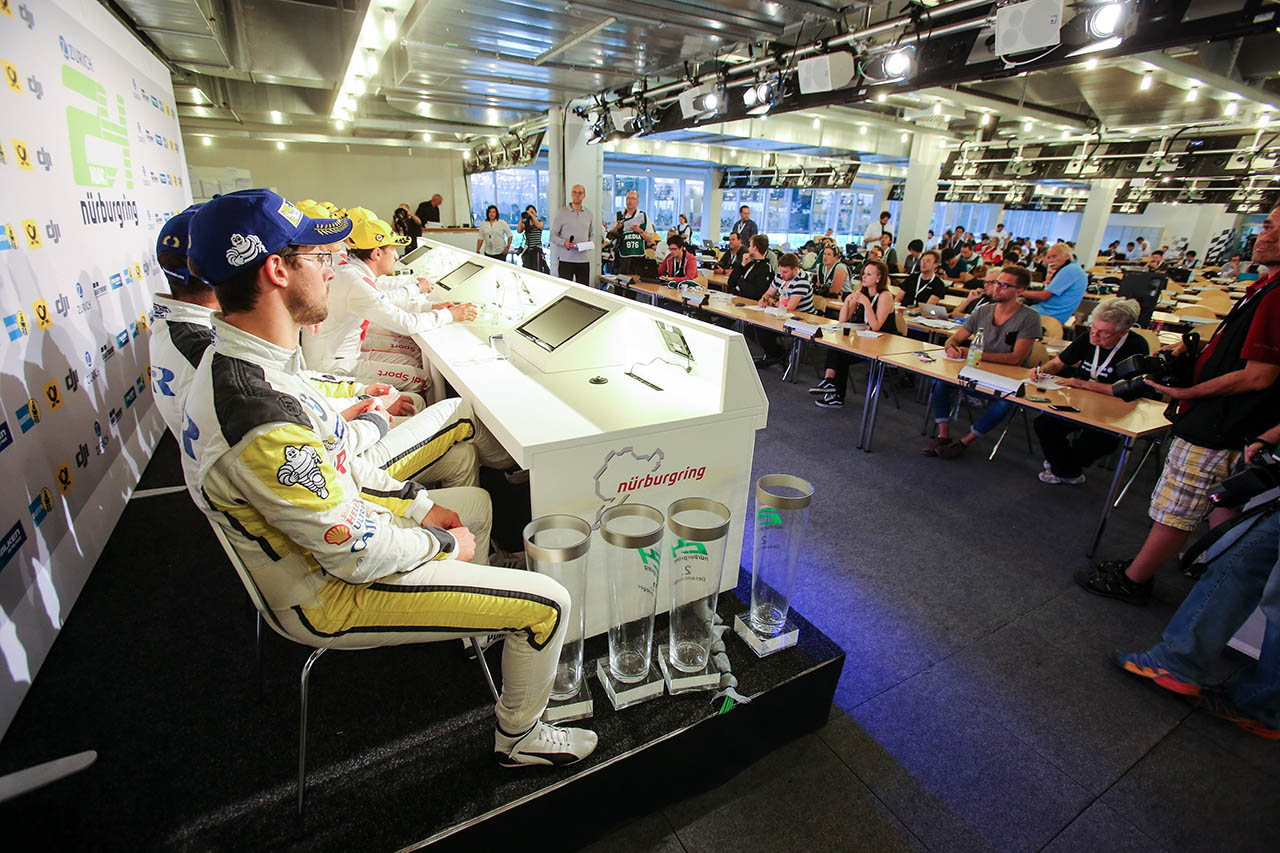 That’s what the drivers of the top-placed teams in the 45th ADAC Zurich 24h Race at the Nürburgring had to say.
Connor De Phillippi (Audi Sport Team Land): “The tyres were of major significance, this year. We tested quite a number of different tyres, over the weekend, and found the definitely best solution for the race.”
Christopher Mies (Audi Sport Team Land): “Having been the leaders for such a long time it’s really disappointing to see that the car suddenly doesn’t produce stops to perform. Fortunately our guys didn’t give up and found the problem quickly. And in the last pit stop we were just lucky. At first we had a refuelling problem and we already had shod the car with slicks but at the last moment we opted for switching to wets. And that proved to be the crucial move for our win.”
Markus Winkelhock (Audi Sport Team Land): “I’m absolutely happy. We held the lead for 22 hours – nearly throughout the race. And then we dropped back to third due to a technical problem . If you contest the 24h Race you just want to win it. Finishing second or third also is nice but this race is very special and you can win it only once a year. And when the rain began to fall we other drivers already sat in the truck and couldn’t believe what was going on out there. To be honest I still am lost for words.
Kelvin van der Linde (Audi Sport Team Land): After the sensor problem I honestly stopped thinking. The only thing I did was pushing. We wanted to pass the BMW ahead of us at all costs. During the final stop we had a minor refuelling problem and spontaneously opted to switch to wets. A decision that proved to be just perfect, with hindsight.”
Markus Paltalla (Rowe Racing): “The Land Motorsport Team has been racing in a class of its own since Friday and was extremely strong, in the warm conditions. But they also were really good in the night. We made the maximum out of our performance and are happy with our achievements.”
Nick Catsburg (Rowe Racing): “It was a great weekend for me. At first the WTCC wins and now on the 24h-Race podium. Although I have to admit that we didn’t really expect to secure such a good result, on Saturday.”
Alexander Sims (Rowe Racing): “Spa and the Nürburgring are the greatest GT3 races in the world. To have made it to the podium in both races is just fantastic. We didn’t expect to make it to the Nürburgring podium but we firmly believed that we could do it. An excellent result.”
Richard Westbrook (Rowe-Racing): “We had a very good and strict schedule for this race but in the closing stages we unfortunately had implementing problems. We tried to push to the max but the heat made a bigger impact on our tyres than we would have guessed. I think we delivered in great style. These guys next to me are my team and everybody gave their very best.”
Nico Müller (Audi Sport Team WRT): “The team performance was great. Everybody did a perfect job. Apart from the final decision. The race ran perfectly for us. The result really hurts.”
Marcel Fässler (Audi Sport Team WRT): “A really successful weekend, the 24h Race is just unique. More than 30 GT3 vehicles on the grid. This figure alone is something special. On Wednesday we drove around the entire Nordschleife on mountain bikes and already could feel the outstanding atmosphere. And I think that’s what’s making the Nürburgring so special. The race itself is hardcore motor racing. You have to assess the risk when and where you should overtake. If you don’t, your race can come to an early and sudden end. And it’s incredibly thrilling. And at the end of the day – I have to admit it – the right squad as won. Although it hurts us at a team.”
Robin Frijns (Audi Sport Team WRT): „It hurts to have been so close and not have made it, in the end. It goes without saying that we would have loved to cross the finish line as race winners. We also would have deserved the win as we tried really hard. Unfortunately we made the wrong decision in the wet and that cost us dearly.”
René Rast (Audi Sport Team WRT): “Throughout the race we were close behind the Land Audi. Due to yellow-phases the gap the hey a one-minute lead over us and although we tried hard to close the gap we couldn’t With 90 minutes to go we could take the lead due to a technical problem at Land. When we came in for the final stop, the track still was widely dry. This was the moment we made the wrong decision. We should have switched to intermediates. In the end, our result gives me mixed emotions.”