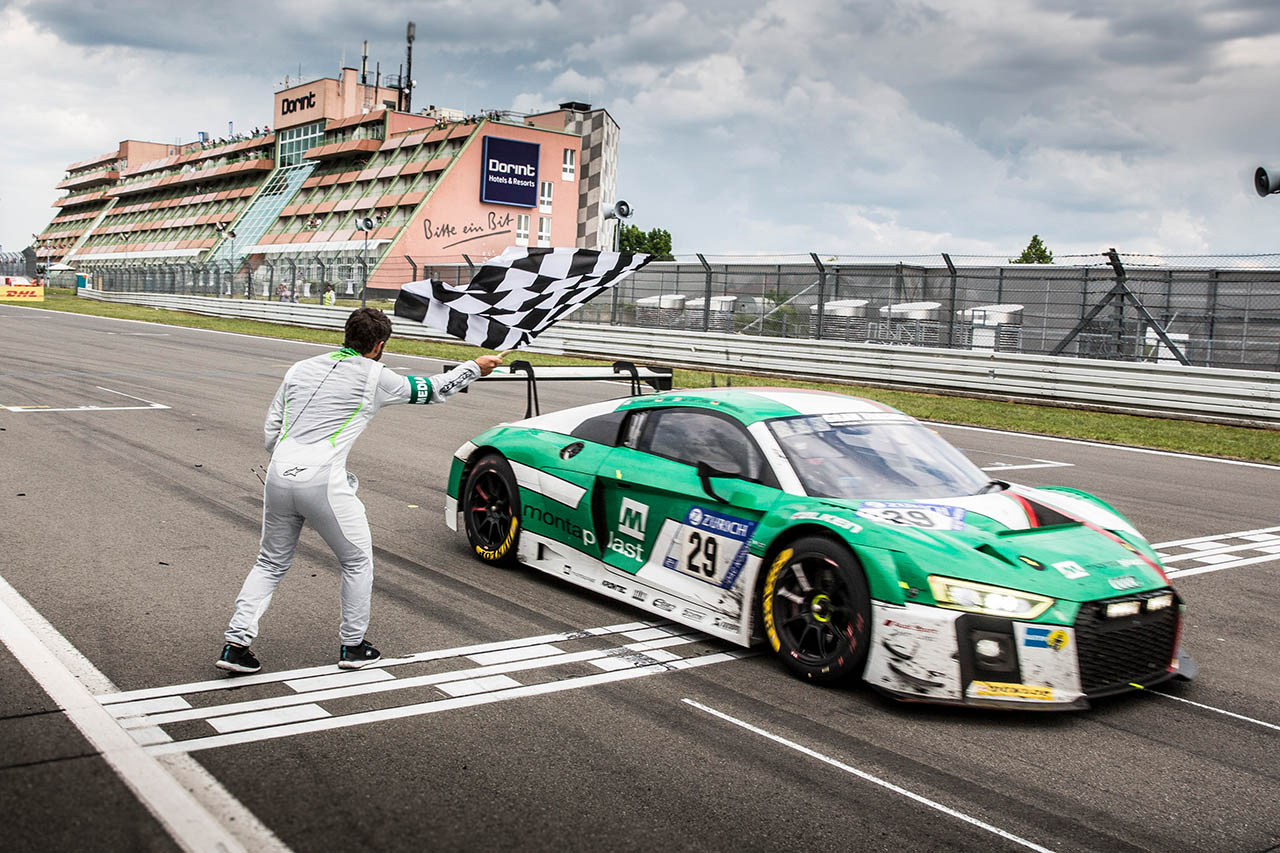 From deep frustration to virtually over the moon in 20 minutes: Thanks to quick-witted move in the tyre gambled during the final pit stop – with just two more laps to go – Markus Winkelhock, Kelvin van der Linde, Christopher Mies and Connor de Phillippi celebrated the win in the 45th ADAC Zurich 24h Race that already seemed to be lost. 90 minutes before the end of the race a defective sensor cost the Team Land’s Audi R8 LMS #29 the lead that it had held for many hours and the dream of the race win seemed to be over. But when rain suddenly began to fall, the team used an originally already mulled pit stop to equip the car at the last moment with wets. The result: the team did not only close in on the rivals that had seemed to be uncatchable but even passed them to regain the lead. The WRT-Audi #9 that held the lead at this point on time went off on its slick and hat no chance of keeping the Land sister car at bay. René Rast who drove the final stint even lost second position to Nick Catsburg in the Rowe Racing BMW M6 GT3 #98 after both cars had switched to wets for the final lap.
“I just don’t know what to say as I believed the race to already have been lost for us” said Markus Winkelhock who was virtually lost for words after his third win in the endurance classic, following the ones in 2012 and 2014. For Christopher Mies (2015) it was the second 24-Race triumph while Kelvin van der Linde, Connor de Philippi and Team Principal Wolfgang Land celebrated their firs 24h-Race win – in front of 205,000 spectators on site.
Hitchcock thriller in the final minutes
“Now I finally know why they call the Nordschleife ‘The Green Hell,’ said de Phillippi. And van der Linde who drove the final stint, added: “I only heard the order ‘Push, push, push!’” Team Principal Wolfgang Land also was delighted. “This was a true Hitchcock thriller,” he said. “Now it’s party time.”
Three-time Le Mans winner Marcel Fässler, who raced the Audi #9 together with Rast Nico Müller and Robin Frijns once again had to leave the Nürburgring empty-handed, on the day after his 41st birthday. But despite all his disappointment, he didn’t begrudge the fellow Audi drivers the win ”As they really deserved it.”
At the same time, the Rowe Racing squad also was in party mood. “That was pure chaos,” said Team Principal Hans-Peter Naundorf after his team’s best 24h-Race result to date that was secured by Catsburg, Markus Palttala, Alexander Sims and Richard Westbrook. “The decisions were made intuitively and the second place is a success for everybody. The show was huge. That was motor racing on the highest level.“
“This was literally hot race weekend. Fantastic weather, tough battles up to the final minute of the race and fans that partied to the max, The 24h Race truly was a huge motor-sport festival,” said Race Director Wolfgang Hornung who witnessed – after 23.75 hours in sunshine that was anything but the your typical Eifel weather – a spectacular finale in the wet. As a downpour in the closing stages jumbled the result. While Rast and Catsburg on their slick were virtually helpless and drove at snail’s pace, around the Nordschleife, van der Linde in the Land Audi that was shod with wets battled his way back up to the lead.
The best Mercedes-AMG was last year’s winner, the Black Falcon #1 in fifth position, followed by the Frikadelli Porsche #31 that finished sixth. The Wochenspiegel-Ferrari #22 came seventh and the best Bentley was the Abt Bentley #37 in 16th position.