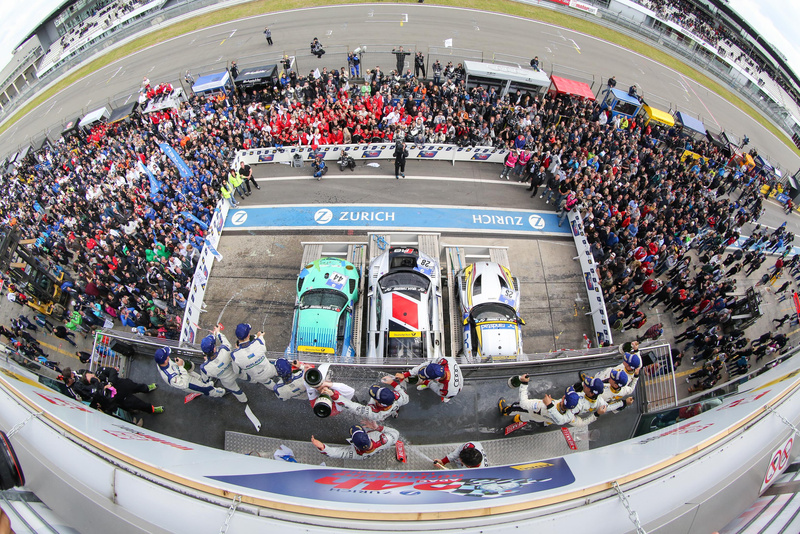 Please find below the quotes of the three top-placed teams – Audi Sport Team WRT, BMW Sports Trophy Team Marc VDS and Falken Motorsports – after the 43rd ADAC Zurich Nürburgring 24h Race.
Christopher Mies: “Yes! Now I have won the biggest trophy secured by one of our family members to date. The race was a tough battle right from the start – with many changes in the lead. In consideration of the numerous retirements, surviving was the first and most important duty. That fact that we did not only succeed in doing so but made it to the highest step on the podium is just fantastic. In the beginning I was lost for words and couldn’t believe that we really made it.”
Edward Sandström: “We encountered absolutely no technical problems and the car ran reliably. Okay, we had this minor refuelling incident but BMW had to cope with the same incident. And this had nothing to do with the car itself. As I said: the car was just perfect.”
Nico Müller: “It was the first 24h race with the new R8 and to have won it right away demonstrates how good the car really is. We could go flat out and encountered no technical problems whatsoever. A big thank you to Audi and WRT – they provided us with a tool that delivered right from the start and enabled us to celebrate this win, today.”
Laurens Vanthoor: “Last year the win in the Spa 24h Race and now the win in the Nürburgring 24h Race. It feels great to have won both these races with WRT. And it definitely is an achievement I’m proud of.”
Maxime Martin: “In the end, we weren’t far behind the Audi when crossing the finish line. It’s a minor shame as we came here to win the race. But we will be back next year to try to win it with another car.”
Lucas Luhr: “I’m not completely happy with having finished runner-up. We came her to win and so, you of course are somewhat disappointed about second place. After all, every racing driver wants to make it to the highest step on the podium. But in consideration of the fact that our BMW is about to go into retirement, second place is a fine result. Congratulations to Audi for having won with the new car right away. We at BMW are happy with having finished second, nevertheless, as we did a great job, in Munich.”
Markus Palttala: “Audi were just too strong, with their new R8. We gave our very best but doing so just wasn’t enough.”
Richard Westbrook: “This circuit is something very special for me – just like for any other racing driver. The organisers did a really great job with the speed limits – a big thank you to everybody for this effort. We gave our very best – although it wasn’t enough. The car was perfectly prepared for every imaginable weather condition. Congratulations to Audi. They did a great job and in the end, they proved to be too strong for us.”
Peter Dumbreck: “In the closing stages we came in for a splash and dash – to be on the safe side. The gap on the BMW behind us (#26) was big enough and we wanted this podium at all costs. Now we are here and this means that we got everything right.”
Wolf Henzler: First of all I want to stress that we didn’t receive any penalties. This was very important for us. The slow-zones certainly were the currently only option for obtaining the possibility to contest this race at all. But now, it should be discussed what has to be done in the future and if there possibly is an other solution to be found. The top priority: to preserve this racetrack that is unique in the world as I want to keep on contesting races, here.”
Martin Ragginger: “All the members of the team worked hard on providing us with this great car. We made a major effort when it came to enhancing the tyres to have the chance of squeezing the maximum out of the car. We set lap times on a high level and made few mistakes. We were competitive and our driver line-up is well-balanced. And we already are looking forward to the new Porsche as we want to use it to give the competition a n even harder time.“
Alexandre Imperatori: “I’m really happy and delighted with having my team-mates. They helped me a lot when it came to learning the track. Fourth in 2014 and now third: that’s fantastic. I hope that we will be able to secure an even better result, next year with the new version of the GT3.”