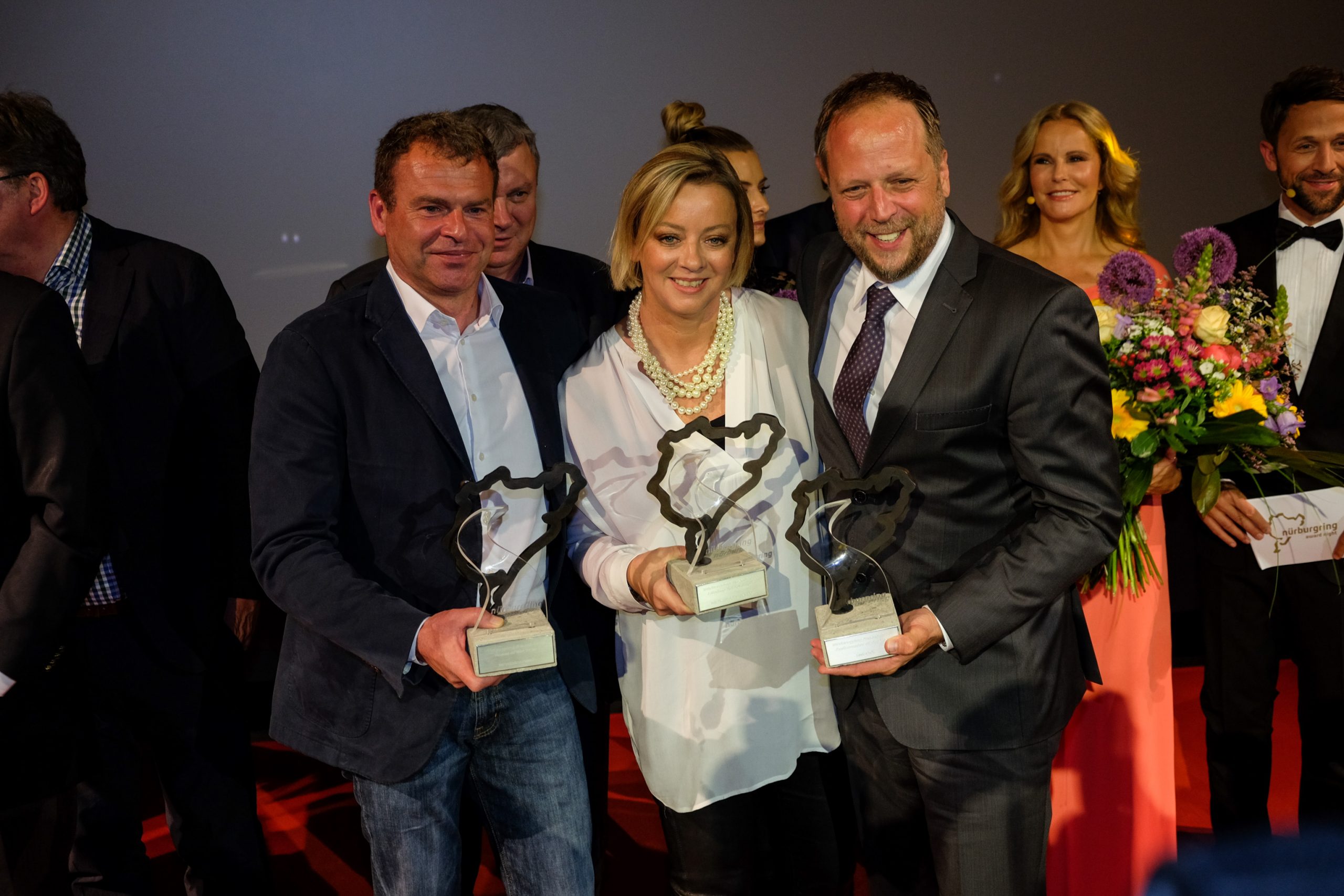 When Sabine Kehm accepted the new lifetime achievement award for Formula One Record World Champion Michael Schumacher on Friday evening as representative of the German, the 300 guests rose from their seats in the ring°werk cinema to honour the German with standing ovations. Schumacher was one of the three winners in the first Nürburgring Award ceremony held in the run-up to the 24h Race. Furthermore, musician and racing driver Smudo received the ambassador of the year award while Mercedes was honoured as brand of the year for their successes in the 2015 season in DTNM and Formula One.
Nonetheless, the award ceremony for Michael Schumacher who also is the record winner in the Eifel with five GP wins at the Nürburgring took centre stage. Norbert Haug, former Mercedes-Benz Motorsport Director and long-term Schumacher companion gave a very emotional laudation on the 47-year old who has to be nursed at home, two and a half years after his bad skiing accident. Afterwards Haug presented Schumacher’s manager Sabine Kehm with the award, accompanied by standing ovations
Sabine Kehm thanked for the award
“A lifetime award is something really special. In Michael’s case you just have to say: he deserved it as he did everything right, as motor racer. This award is a confirmation of his will power, his motivation and – of course – his amazing talent, his extraordinary discipline and his work enthusiasm,” the former journalist said in her acceptance speech. “But one thing is clear: We all would feel better if he was standing here tonight to thank you instead of me. But unfortunately this isn’t possible and we all have to accept the situation and learn how to deal with it. Nonetheless, we all will keep on hoping and do everything what we can that could help thing to perhaps change, some day. What I really like in this award and what made Michael’s family happy, too, is the fact that this lifetime award dignifies Michael’s motor racing career, thus letting it take centre stage again. It was high time that these topics are moved back to the centre of the public interest. Therefore, I have to say a special thank you that this is achieved by this prize.”
The laudation for the environmentally aware and German rapper Smudo of the band ‘Die Fantastischen 4’ – and motor racer – was given by German actress Sophia Thomalla. Dr Michael Illgner, Chairman of ‘Deutsche Sporthilfe’ recognised the Mercedes-AMG’ successes in the 2015 season and presented Mercedes-AMG CEO Tobias Moers with the award.
The jury of the new Nürburgring Award comprised – in addition to Norbert Haug – the former Formula One ace and today’s BMW DTM driver Timo Glock as well as RTL Formula One pit-lane reporter Kai Ebel. Ebel sent a video message from the Formula One GP in Monaco t – together with four-time Formula World Champion Sebastian Vettel who also keeps an eye on the 24h Race, from the Principality. A race he only knows as spectator, to date. “It’s contested at the Nordschleife and so, the 24h Race is a race for real men and with an outstanding atmosphere. Everybody should contest this race some day,” said Vettel who also has fond memories of the Nürburgring beyond the 24h Race. “Yes, of my first home win in Formula One,” he explained. “The Nürburgring is a very special place for every racing driver. And to race with Formula One at the Nordschleife would be the real hit.”