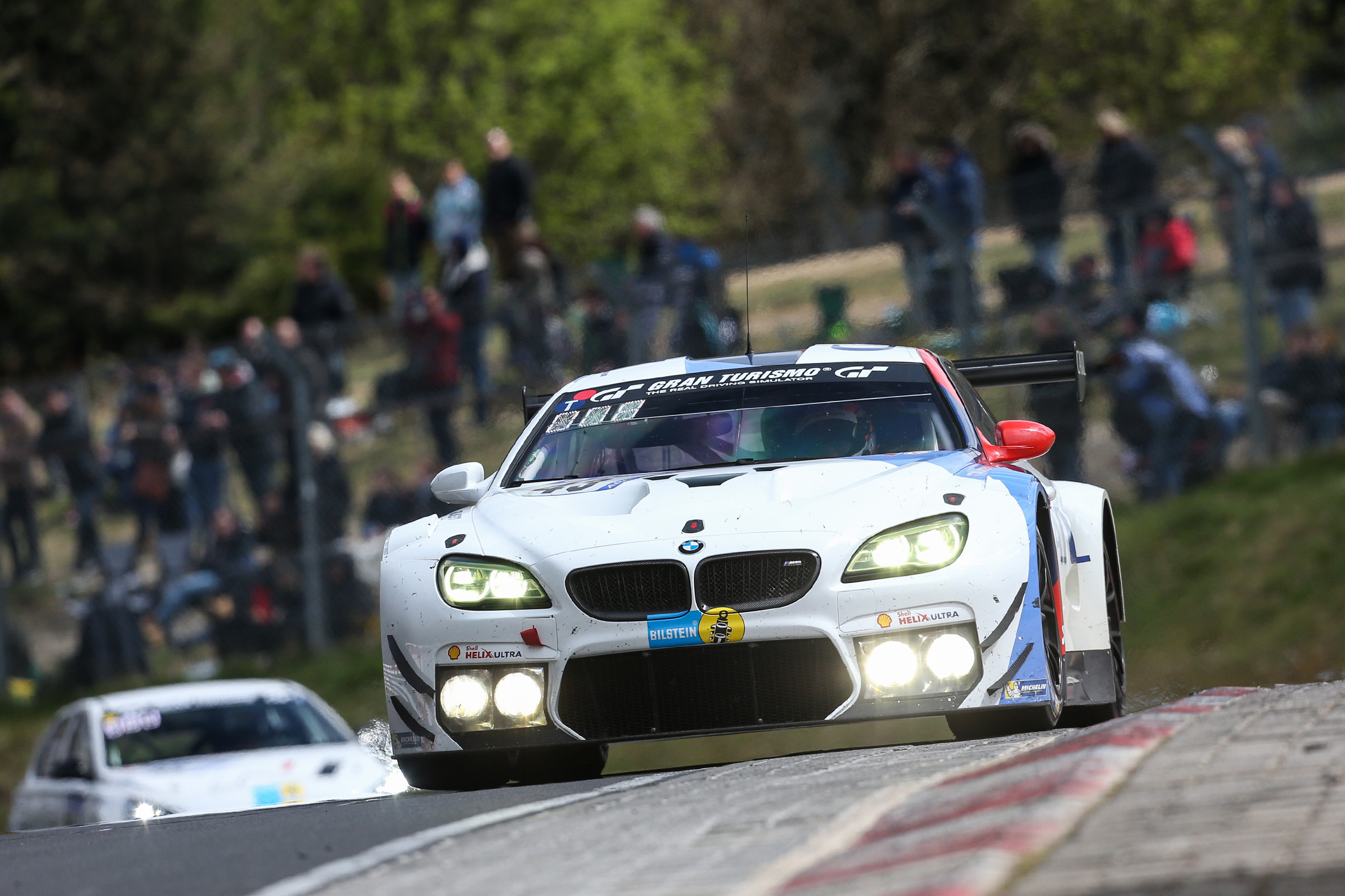 The 2017 ADAC Zurich 24h Race will bring back a tradition-rich battle: Team Schnitzer makes its 24h-Race comeback as BMW works squad and will have to compete with Manthey-Racing, one the most tradition-rich Porsche squads. Both teams have won the legendary endurance race five times, to date and so, another win would mean to take the sole lead in this ranking. For five years Schnitzer was absent but now the Bavarians are back at the Nordschleife to contest the race with two BMWs BMW M6 GT3: a combination that makes every pundit click his tongue. But following their win in the two VLN races held in the run-up to the 24h Race, Manthey are among the top favourites. And so, the 2017 24h Race also will be the battle of the titans.
Schnitzer celebrated five Nürburgring 24h-Race wins to date, the first back in 1989. To remind of this triumph, one of Schnitzer’s M6 GT3 vehicles will contest the race in the striking livery featuring of those days, featuring three coloured stripes. And the drivers of the car represent a mix of drivers with a lot of Nordschleife experience (Augusto Farfus, Timo Scheider) and Nordschleife rookies (Antonio Felix Da Costa and Alex Lynn). ”The car looks just great,” beamed Farfus, “When I was a little boy and saw a car with this livery I  knew it’s a BMW racing car.”
The BMW M3 E30 – small but competitive
Charly Lamm already was the Schnitzer Team Principal when the squad secured its maiden 24h-Race win and he loves to remember the BMW M3 E30 the team raced with in those days. “It was a small car with a small engine but a true driving machine,” he said. “When it comes to the horsepower we were inferior to our rivals, such as Ford, Volvo, Jaguar or Rover. But the M3 was on its first lap as fast as on its last. The tyres didn’t degrade and it didn’t consume a lot of fuel. Therefore, we could drive long stints and win the race twice.” And  with Roberto Ravaglia, Emanuele Pirro and Fabien Giroix the team could rely on an extremely competitive driver line-up.
Later, Schnitzer opted for a first multi-year break but from 2003 to 2005 they were back  with the M3 GTR (E46) and celebrated another two 24h-Race wins. Five years later the Bavarian squad contested their next. Brazil’s Augusto Farfus who also is a member of this year’s driver line-up, recalls the year 2010: “We won the race in my first year, in the second we came twice.”
First appearance with a GT3 vehicle
Now Schnitzer returns to the Nordschleife but despite all the successes they rather feel like rookies: “In the few weeks since we are back we had to realise that quite a lot of things have changed,” admits Charly Lamm. The main difference is the GT3 category. “Yes, we have won several editions of the race but a lot of time has gone by since 2011. So yes, we have got a certain level of experience but we also are rookies. After all it’s the first time that we will contest the race with a GT3 vehicle.”
Clever race tactic will be crucial
What will be necessary to add another win to the team’s tally? The Nordschleife and its special characteristics always are of major significance. “The circuit actually is the same,” says Lamm, “The few changes aren’t worth mentioning. But the Nordschleife is a mystery – it’s length and its environment, such as the weather, turn the races here into extremely difficult challenges. “And so, you have to know all the secrets and challenges of the circuit to incorporate them into your operative business.“ Team Schnitzer contested two VLN rounds and a test at the Nordschleife, with the BMW M6 GT3, and still are on the way to getting to know the car. And in addition there is the balance of performance the team has to cope with for the first time. “I don’t know if its boon or bane,”  Lamm says laughing. “The fans are provided a well-balanced field but it’s virtually impossible to open a gap on your rivals. Now it’s important to find your rhythm right at the start and to be one of the front-runners and outpace your rivals as soon as a situation such as a fast driver or the perfect tyre choice or the night offers you the chance of doing so.”
Farfus: “Winning here is more difficult than at Le Mans”
Meanwhile, the drivers also think about the challenge to come: “The 24h Race has turned into a sprint race,” explains Augusto Farfus. “In the past it was enough to just battle your way through and make it to the finish line and you secured one of the top positions. There is no safety-car and this means that every lost second really is lost. Winning here is more difficult than winning at Le Mans. The circuit is a massive challenge. There are more vehicles and you have to push all the time.”
The drivers: a mix of old hands and young guns
Antonio Felix da Costa is one of the drivers who will race the BMW with the historic livery and at the same time, it will be his first Nürburgring 24h Race. “I already race for Schnitzer in DTM and it’s just fantastic that I also will race for them at ‘The Ring’,” beams the Portuguese “It won’t be easy for us as Alex Lynn and I are Nordschleife rookies. But on the other hand, Augusto Farfus und Timo Scheider have got a lot of experience.” Farfus even regards the mix as an advantage. “They will opt for a more open approach. As experienced drivers you are so accustomed to everything that you won’t come up with new ideas. The rookies, however, possibly will.”