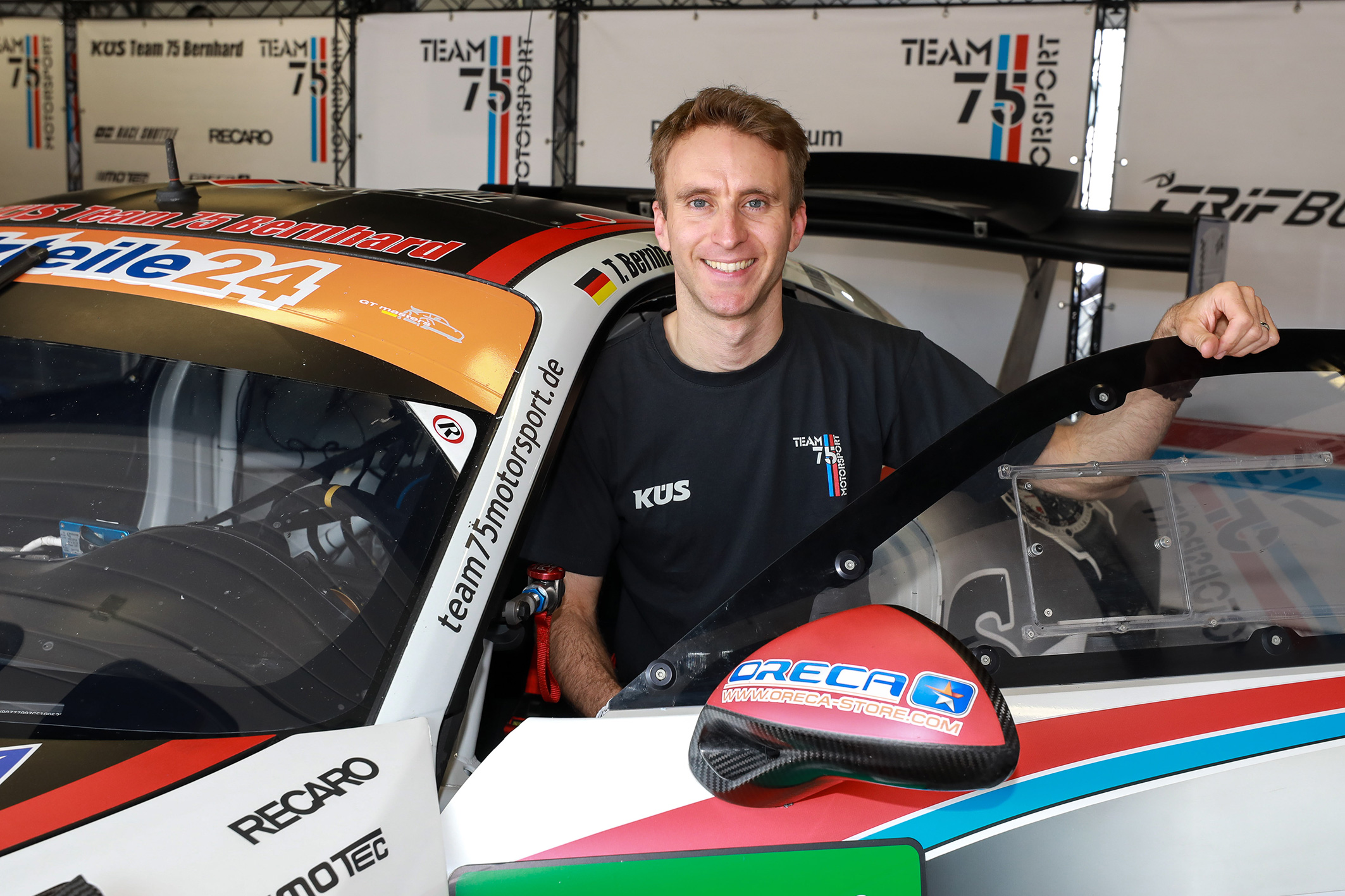 Porsche also are among the top favourites in the battle for this year’s ADAC Zurich 24h-Race crown. One of the spearheads of the Zuffenhausen based manufacturer is the team of 24-Race record winners, Manthey Racing, The team from the Eifel won the race five times an each of these wins was secured with Timo Bernhard being one of the drivers. This year, however, Bernhard returns to the Eifel as Team Principal. After 12 appearances as driver he is back in the Eifel with his KÜS Team 75 – but this time he will stay at the other side of the pit wall.
Timo Bernhard is back after a multi-year break and while coming back must feel like coming home, for the record winner, it will be a premiere for his team, KÜS Team 75. “I think it’s important that I’m at the helm,” says the German. “We have got a great driver line-up and so, I can provide the team maximum support. I also played this part in the Spa 24h Race.”
Motor-racing superstar: Two World-Championship titles and two Le Mans wins
When the moment arrived for Bernhard to ask himself: “Should I get behind the wheel or not?” it was not difficult for him to do without getting back behind the wheel. After all, the 2013 24h Race was the last had contested as driver and so, the temporal distance seemed to be big enough. In the years after 2013, the German was involved into the extremely successful Porsche Le Mans and World Sports Car Championship programme to an extent that he had to set his other activities aside. 2015 and 2017 World Champion, Le-Mans winner 2017 – and another one in 2010 with Audi: Bernhard is one of the motor-racing super stars. And although he raced the most sophisticated racing cars all over the world his heart still beats for the Nordschleife. “I was at the Nordschleife a few days ago and drove myself,” he reveals laughing. “Now I’m happy to have made the decision not to drive. Otherwise, making this decision definitely would have been more difficult.”
“Perfect timing also is crucial when it comes to the preparations“
Bernhard’s vast Nordschleife experience also was extremely important during the preparation weeks. “I attach major importance to the preparations,” explains the German. “Furthermore, we try to simulate different scenarios, I know, you can’t prepare for everything that can happen in the 24h Race but I had to cope with quite a lot of incidents. Furthermore, a good preparation makes you feel better.” The Nordschleife remains something special for him. “The circuit is unique and the regulations differ from the ones of other events, such as Spa or GT Masters. Here, many details and the timing are crucial and this also applies to the preparations. Therefore, the experience of my 13 appearances on the 24h grid can be important.” Nonetheless, Manthey’s goals are modest:”We haven’t set ourselves the goal to achieve a certain result. We want to have a clean, trouble-free race and achieving this will be difficult enough.”