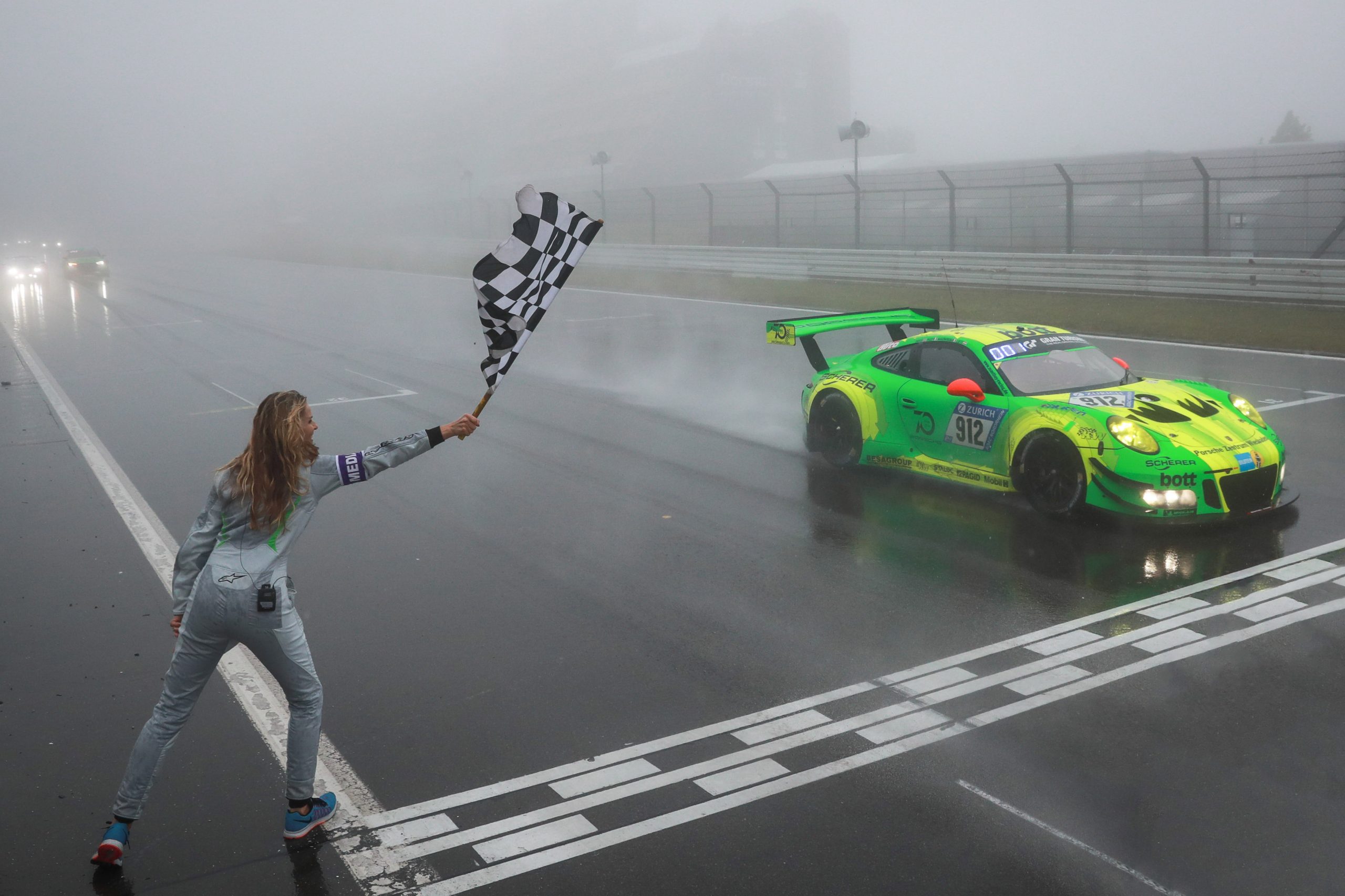 The 46th ADAC Zurich 24h Race ended with a 90-minute final spurt. The race was red-flagged for about two hours due to rain and then, the Manthey-Porsche #912 defeated the Black-Falcon-Mercedes #4 in a spectacular sprint battle and gave the team the record-breaking sixth overall win. After the restart at 13:59hrs CEST, these two cars were the only ones in the same lap and thrilled the 210,000 spectators on site and the millions at home in front of their TV sets or mobile devices with a fierce fight that was won at the end of the day by Frenchman Fred Makowiecki for Manthey. For the team that is based in Meuspath, right at the Nordschleife, it was the first triumph since 2011. It was the sixth win for the squad that established a new record with this success and is the exclusive record holder, now. At the same time it was the 12th win for Porsche. The 47th edition of the legendary event will be held from 20th to 23rd June, 2019.
“What a race! Very emotional, great for Porsche and the entire motor-sport,” said the Briton Nick Nandy, 2015 Le Mans winner, who won the race together with Richard Lietz (Austria), Patrick Pilet (France) and Makowiecki. “A win for the entire team. This is one of the toughest races in the world, virtually everything can happen and there are so many potential winner cars on the grid. In your life you possibly have two or three chance of winning such a race. It’s fantastic.” For all the four victorious drivers it was their debut win in the ADAC Zurich 24h Race. “It couldn’t have come any better regarding the 70th birthday. We credit this win to Dr Porsche on the occasion of the next decade in his life We established a new lap record and wouldn’t mind to continue like this,” said Porsche Sport Director Dr Frank-Steffen Walliser.
Crucial move at the Mercedes-Arena
The crucial overtaking manoeuvre was made by ‘Mako’ with 1:11 hours to go at the entrance of the Mercedes-Arena. The two rivals touched and the Mercedes-AMG spun, with the Porsche taking the lead. But Christodoulou wasn’t ready to give in and pressurised his rival to the max. Even a slight crash-barrier contact didn’t stop the Briton. In the end, however, Makowiecki crossed the line 26.413 seconds before Christodoulou, thus making for the second-closest finish in the history of the race. The closes was the Black Falcon win in 2015 with a 5.697 lead.
“I tried absolutely anything but there was nothing I could do. We’ll be back next year,” said Christodoulou who failed – just as Maro Engel (Germany), Manuel Metzger (Germany) and Dirk Müller (Germany) to win the race a second time. Third place was secured in a just as thrilling battle by Dutchman Yelmer Buurman in the Black-Falcon-Mercedes #5, followed by the Aston Martin #007 and the Black-Falcon-Mercedes #6. Last year’s winners, the Audi Sport Team Land Audi R LMS #1, finished sixth, thus being the fourth manufacturer among the top six.
Even before the race was temporarily red-flagged – incidentally the first time since the Black Falcon win and the only seventh since the races debut edition in 1970 – the famous Eifel weather displayed even its most notorious facets – from brilliant sunshine to thunderstorm-like heavy rain.
“This was one of the most thrilling 24h races of all times and one of the most nerve-wrecking four all those involved,” said Race Director Walter Hornung: “It featured everything that’s making motor racing so fascinating. Sensational drivers, great racing cars, weather gods that provided the most different conditions and a circuit that takes the drivers to their limits in every single second.”
Mega fast opening stage
The race was started on Saturday afternoon in brilliant sunshine with a spectacular show of Kevin Estre in the Manthey-Porsche #911. The Frenchman took the lead from the pole and was virtually flying, broke the lap record – that had been established by Augusto Farfus in 2015 – two times and quickly opened a gap on the rest of the field, thus laying the basis for the comfortable lead of his team in the following hours. The #911 controlled the field until late in the night but then, Romain Dumas lost in on a trail of oil, crashed – and the race of #911 was over.
Afterwards, the sister car, #912, stepped into the breach. Due to different pit-stop rhythms, #912 and the Black Falcon Mercedes AMG GT3 #4 alternated in the lead but then, Patrick Pilet in the Porsche accelerated to early out of a Code-60 zone. As it was about the lead, the offense was investigated by the race control extensively by dint of GPS data, vehicle data and video footage – but in the end, all these data confirmed the offense (82kph in a Code-60 zone) and the team received a 3:32-minute time penalty. The battle for the win seemed to be over, but then, the red flags due to the dense fog 20.5 hours into the race nullified the gap between the two cars that still were racing on the same lap.