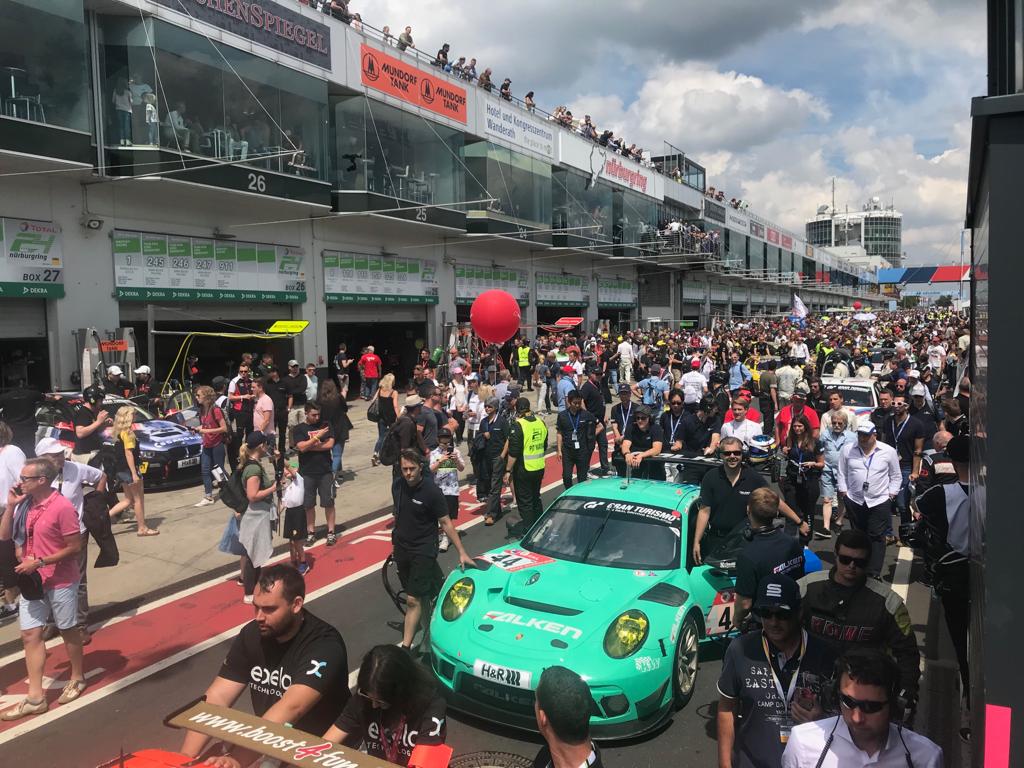 When the starting lights will be switched green, today at 15:30hrs CEST, some 155 cars will start into the 24-hour battle for positions, class wins and the overall win, with about 580 drivers from 32 countries giving their very best – in cars of 22 manufacturers.
Once again, more than 200,000 motor-racing enthusiasts travelled to the Eifel to witness the ADAC TOTAL 24-Race action live on site and a huge team is necessary for organising such a mega event. The efforts made both on and aloof from the track for turning the event into a success are outstanding.
The first camp sites at ‘The Ring’ open their gates for the short-vacation visitors as early as on Monday. At the circuit itself, the preparations for most challenging racer in the world and the state of emergency caused by it are executed in well-practiced style. 600 helpers alone do their very best to make sure that the visitors have a trouble-free time – from the arrival to the departure: the cashiers, the marshals on the stands or the car parks for more than 60,000 passenger cars and far more.
In the run-up to the 24h Race, about 60 persons executed more than 10,000 of working hours until everything has been organised and erected. For instance, 18 kilometres of construction hoardings were erected to mark prohibited areas and another six kilometres to protect nature conversation areas. In addition, 90 mobile floodlight masts make for the necessary illumination of the total of 1.5 million square metres of camping and parking sites.
Furthermore, 700 mobile toilets and 150 showers are positioned around the Nürburgring Nordschleife. And 106 two-cubic-metre barrels as well as 15 10-cubic-metre tanks supply the visitors with water.
Just as important as the supply with fresh water is the disposal. This task is executed by experienced service providers that already know the Nürburgring as event location. They work hard to collect and dispose the garbage accumulated during the 24h Race but also have to rely on the support by the visitors around the circuit to be able to preserve the ‘Green Hell’.