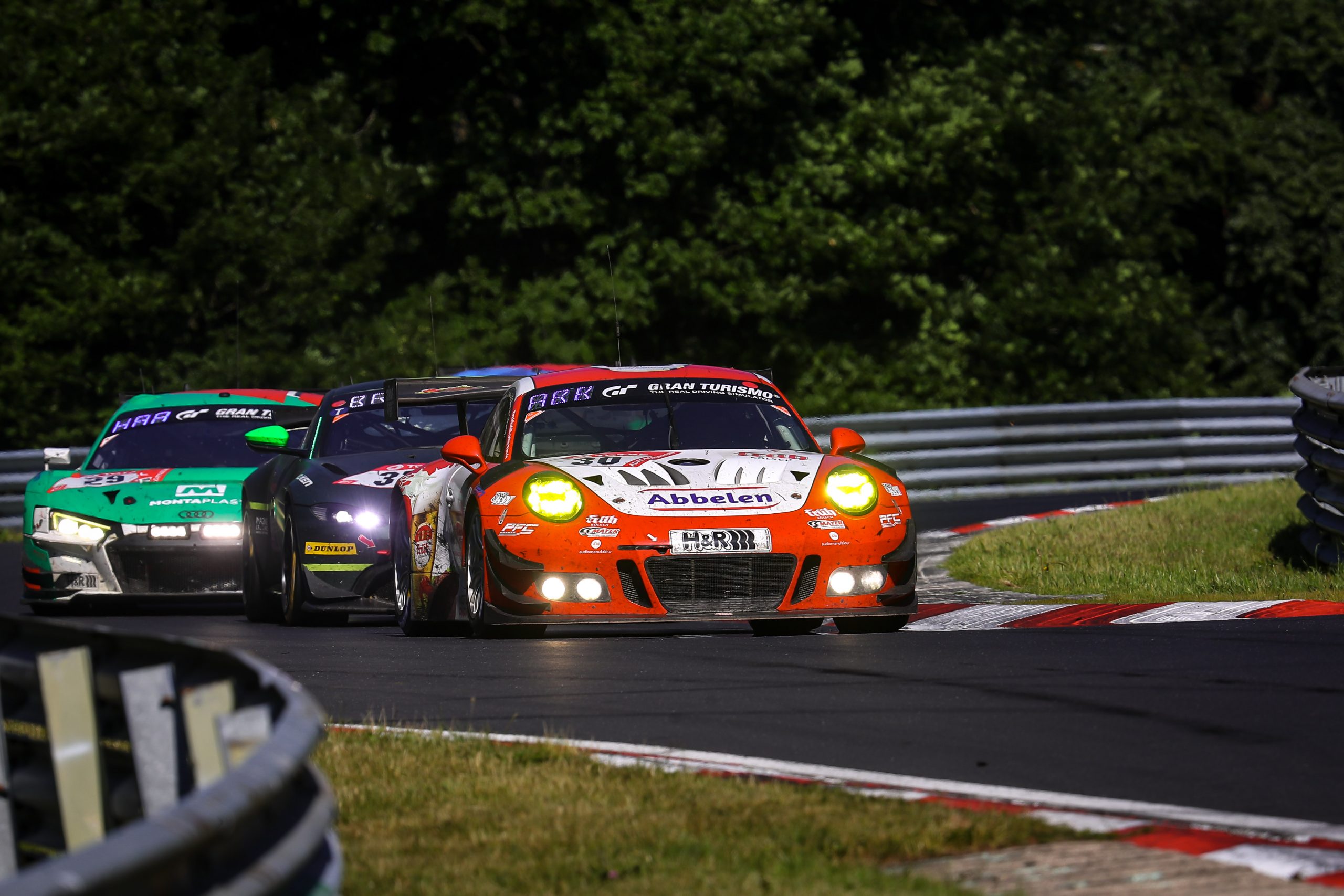 At the end of the 21st hour the Manthey Racing Porsche 911 GT3 R #911 still holds the lead – but a 5.32-minute time penalty will jumble the order at the front end of the field. The Frikadelli Porsche #31 that also delivered in fine style, so far, had to cope with a dose of bad luck too. At first the team lost the second place because of a damaged tyre and then it stopped for good due to technical problems. The second place was inherited by the Team Black Falcon AMG-Mercedes GT3 #6, followed by the Audis of the Audi Sport Teams Land Motorsport, Phoenix Racing and Car Collection.
#4 – Audi R8 LMS (Kaffer,Stippler,Vervisch,Vanthoor)
10:35hrs: Dries Vanthoor uses the slipstream at the Döttinger Höhe to pass René Rast in the Audi #29. The two fellow Audi drivers fight really hard for third position.
#6 – Mercedes- AMG GT3 (Assenheimer,Bastian,Buurman,Piana)
11:39hrs: While trying to fend off the pressurising René Rast, Gabriele Piana pushes the German onto the grass at the Döttinger Höhe. In the incident Rast hits the Mercedes and damages one of its tyres while Rast succeeds in getting his car back under control and continues.
#29 – Audi R8 LMS (Mies,Rast,van der Linde,Haase)
12:14hrs: René Rast: “The racing was tough. In two stints I had wheel-to-wheel battles with Dries Vanthoor and a Mercedes. Unfortunately, I had a close encounter with the Mercedes. It pushed me onto the grass at the Döttinger Höhe what was rather dangerous. Altogether we can be happy as we are a factor in the battle for the podium.”
#31 – Porsche 911 GT3 R (Dumas,Campbell,Müller,Jaminet)
11:16hrs: Sven Müller: “There are less cars out there and that makes the racing somewhat easier than in the night when there was oil on the track at many places. Now we have to contest another sprint race. My stint was okay. I could pass the Mercedes at the Döttinger Höhe. There was a yellow-flag phase and it had to slightly back off what offered me the chance of building up momentum and pass it. We want to make it further up and one position should be possible. Now we will give our very best to achieve this goal.”
12:04hrs: Damaged right rear tyre. Cruises back to the pits.
Matt Campbell: “Unfortunately I suffered the puncture when I had completed just half the lap and lost several minutes on my way to the pits. Really annoying but what can you do. You have no influence on this kind of things.”
#48 – Mercedes- AMG GT3 (Hohenadel,Arnold,Marciello,Götz)
Maximilian Götz: “Several laps before my accident I had a contact with Raffaele Marciello. Therefore, it arguably was a consequential damage. It was a bad crash but fortunately I survived it unharmed. I’m really sorry for the team that worked so hard.”