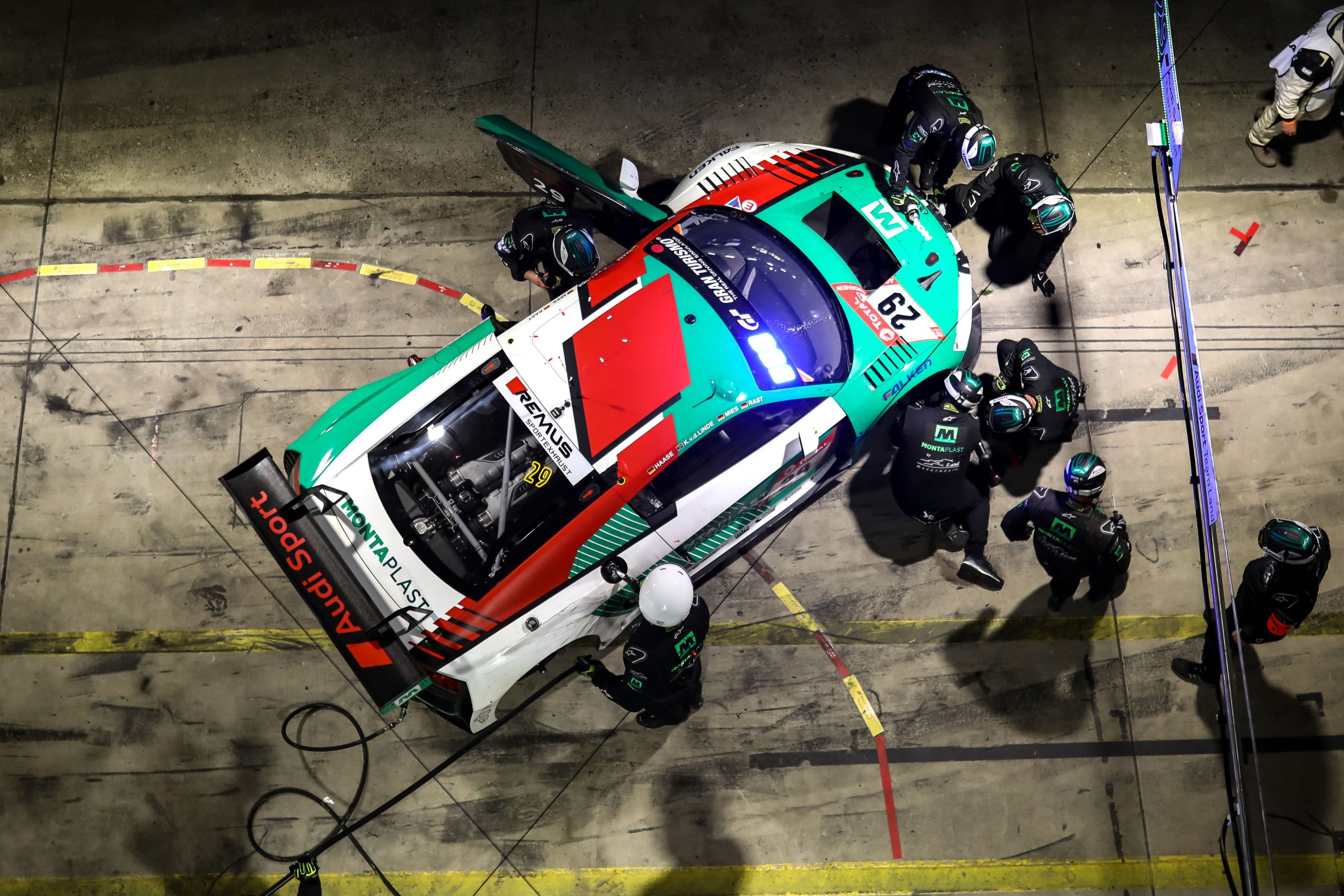 The 18th and 19 hours of the race feature consistency and drama in equal measure. Manthey Racing’s #911 still holds the lead while the battle for second place between the Frikadelli Racing Porsche #31 and the Mercedes-AMG Team Mann Filter vehicle #48 remains close until the 19th hour is nearly over. At first, Frikadelli drop back due to a time penalty and then, Maximilian Götz crashes in the Hohe Acht region and the Mercedes-AMG GT3 is out of the contention for the top positions. Behind the two leading Porsches, the two Audis R8 LMS of the Audi Sport Teams Land (#29) and Phoenix (#4) are holding third and fourth positions.
#4 – Audi R8 LMS (Kaffer,Stippler,Vervisch,Vanthoor)
10:08hrs: Driess Vanthoor wants to pass René Rast in the Land Audi #29 but has to back down as a slower car gets into his way. To avoid hitting this vehicle, the Belgian has to opt for driving through the run-off area and temporarily loses the contact to Rast.
#6 – Mercedes- AMG GT3 (Assenheimer,Bastian,Buurman,Piana)
09:49hrs: Gabriele Piana for Nico Bastian who says: “We currently hold sixth place and could largely close the gap to the two Audis. Now we have to continue at the same speed but have to increase our consistency. Then we will be able to fully close in on the two Audis. For the rest we will need a dose of luck.”
09:59hrs: Yelmer Buurmann has to retire from the race for health reasons. Therefore, the rest of the race will be contested only by Bastian, Assenheimer and Piana.
#14 – Audi R8 LMS (Winkelhock,Haase,Fässler,Rast)
10:15hrs: Receives a 32-second time penalty for having ignored flag signals
#16 – Mercedes- AMG GT3 (van der Zande,Vautier,Seyffarth,Heyer)
Kenneth Heyer: “We have achieved our goal to survive the night without any mark worth mentioning. We suffered a tyre damage at the Nordschleife but fortunately late on the lap and consequently didn’t lose too much time. Driving in the night was rather difficult: the visibility partly was extremely poor and we witnessed a lot of accidents and Code-60 phases that cost us some time. We are consistently racing in the top 10 and have opened a slight gap on the cars behind us. There still are seven hours of racing to be contested and a lot of things still can happen. We want to keep on contesting the race without making mistakes. Should we succeed in doing so we have to wait and see where we will finish.”
#18 – Mercedes- AMG GT3 (Vettel,Ellis,Ludwig,Szymkowiak)
Jules Szymkowiak: “Things have been running well, so far. We avoid getting involved in any incidents and focus on making it to the finish. We are well prepared for the final third of the race. I drove a double stint in the night – what turned out to be a major challenge. With all these Code-60 phases you couldn’t push to the max but had to cleverly manage your approach. Nonetheless, I pushed wherever it was possible to do so. In the morning I will drive another double stint. One of our main rivals seems to be in problems while we are racing anticyclically compared to the others. The closing stages will be thrilling.”
#31 – Porsche 911 GT3 R (Dumas,Campbell,Müller,Jaminet)
08:40hrs: Serves his 33-second time penalty for falling below the minimum stop time during the previous stop. Jaminet is replaced by Müller. Due to the time penalty the car drops back to third, behind the Mann-Filter Mercedes #48.
#48 – Mercedes- AMG GT3 (Hohenadel,Arnold,Marciello,Götz)
09:12hrs: Collision with the #141 in the Dunlopkehre. Apparently both vehicles can continue.
Günter Aberer, Team Principal: “We had a severe close encounter with a Porsche. The Porsche saw us somewhat too late and turned in. The tracking of our car was slightly bent but the guys were able to readjust it. We hope that the car will stand the rest of the race. No matter what position you are in – you have to keep on praying until the race is over.”
10:09hrs: Maxi Götz spins at the Hohe Acht and slightly crashes backwards into the crash barriers.
10:15hrs Maxi Götz is towed away by the DMSB Staffel.