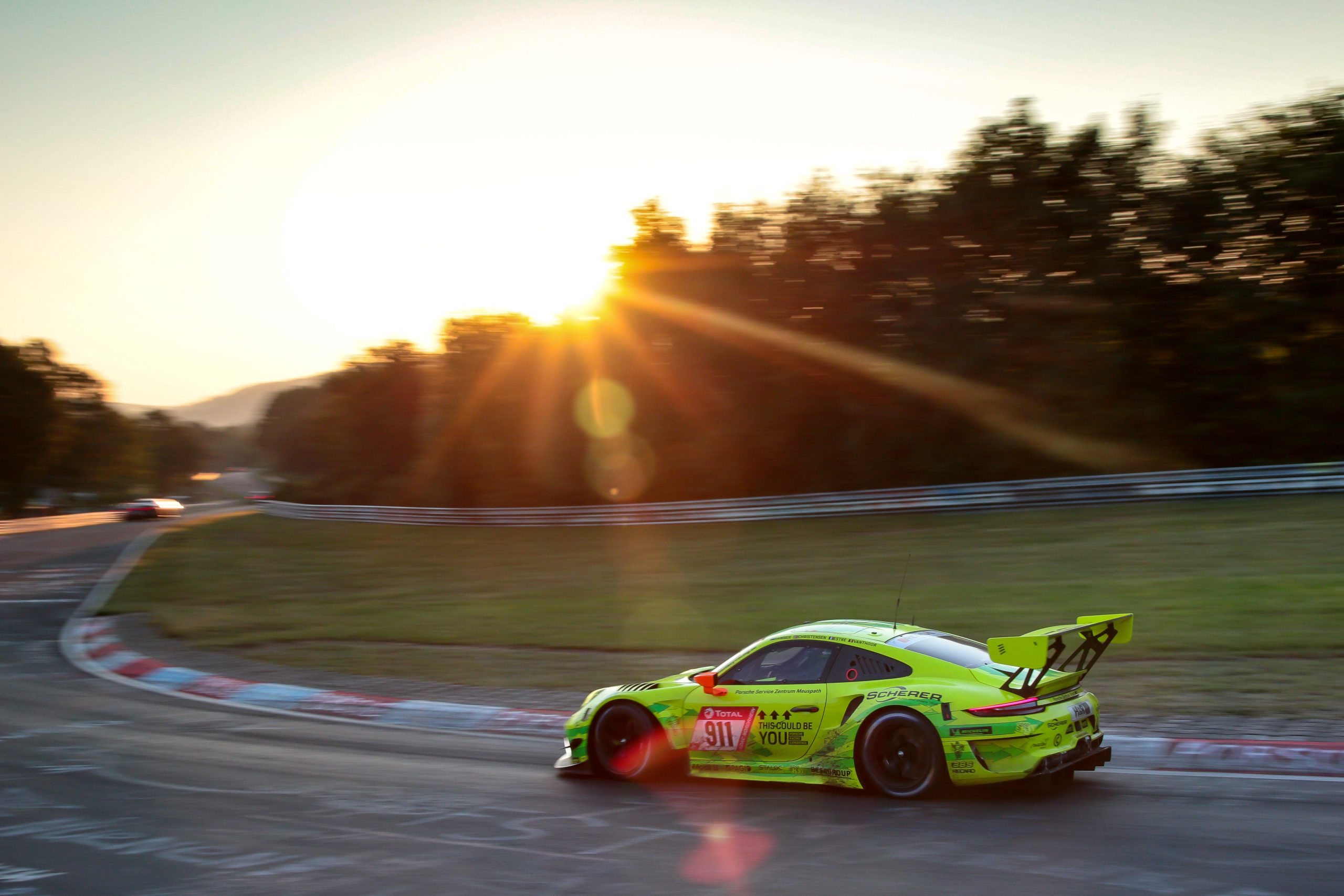 At the end of the 17th hour the spectators witness a Porsche one-two. The Manthey Racing #911 still holds the lead, followed by the Frikadelli Racing Porsche #31. The second- to ninth-place vehicles still are in the same lap. The toughest rival of the two Porsches is Mercedes-AMG Team Mann Filter GT3 #48. Meanwhile, two Audis R8 LMS (Audi Sport Teams Land #29 and Audi Sport Team Phoenix #4) are fighting for fourth position. Despite their problems in the night, the Glickenhaus in 17th remains the fastest vehicle of those not racing in the GT3 category.
#6 – Mercedes- AMG GT3 (Assenheimer,Bastian,Buurman,Piana)
08:04hrs: Nico Bastian skids over the grass in the Schwedenkreuz to avoid hitting the TJ-Opel Astra #164.
#7 – Lamborghini Huracan GT3 Evo (Mapelli,Jefferies,Di Martino,Lyons)
Team Principal Franz Konrad: “The night was okay, nothing worth mentioning. We had a few problems with our drivers, one of them didn’t cope well with driving in the night. Now we want to push again. Let’s find out if our baby is ready to do so.”
#11 – Ferrari 488 GT3 (Keilwitz,Kainz,Krumbach,Mattschull)
07:17hrs: Alexander Mattschull: “The ride into the morning really was my first stint that allowed me to slightly familiarise myself with car and circuit and to complete eight consistent laps. I think I slightly improved my times lap by lap. Due to the rising sun the visibility was partly poor. It was like being blind.”
#16 – Mercedes- AMG GT3 (van der Zande,Vautier,Seyffarth,Heyer)
07:35hrs: Jan Seyffarth: “I contested a double-stint. Driving out of the night and into the morning sun always is awesome. Our pace was fine but once or twice we had bad luck with Code 60 zones. Kenneth Heyer now arguably also will drive a double stint. We are happy with our race so far.”
#22 – Ferrari 488 GT3 (Weiss,Weiss,Dontje,Still)
07:31hrs: Hendrik Still: “I contested a double stint. The car’s performance was really great. Hey, I just have seen: the fastest race lap. That absolutely fantastic!”
#31 – Porsche 911 GT3 R (Dumas,Campbell,Müller,Jaminet)
07:39hrs: Sven Müller: “In the night we had to cope with ups and downs. I didn’t drive a lot but will cover more kilometres in the closing stages of the race. Matt Campbell told me that it was truly chaotic, out there. There was oil on the track – and a lot of debris. But we survived the chaos well and the car is still okay. We currently hold second position but the fight with the Mercedes is close.”
07:44hrs: 33-second penalty for falling below the minimum pit-stop time.
#122 – Opel Manta (Beckmann,Hass,Strycek,Schulten)
07:19hrs: Crash in the Ex-Mühle area.
#911 – Porsche 911 GT3 R (Bamber,Christensen,Estre,Vanthoor)
6:57hrs. Kevin Estre completes the 100th race lap. Due to the numerous code-60 phases in the early stages of the race it will be arguably impossible to tie the 159-lap record. 157 laps seem more probable.
07:31hrs: Kevin Estre: “When I woke up, we held a two-minute lead. That felt nice. The car is really great, only the brake-pedal travel is somewhat ‘long’. We now changed the brake callipers, let’s see if that helps. I hope that we will continue as trouble-free as we did before.”