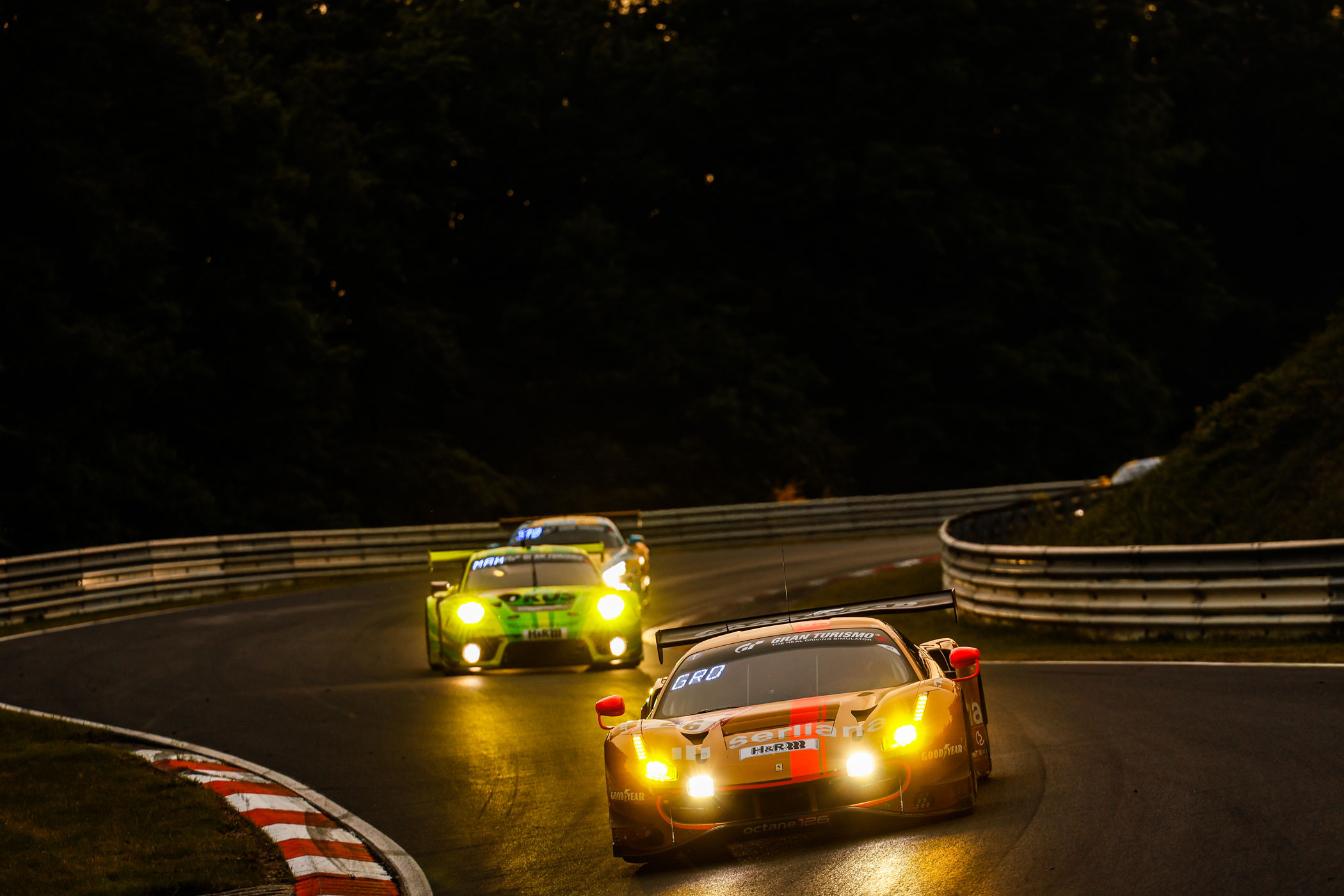 Forza Ferrari at the 50th ADAC TotalEnergies 24h Nürburgring: Luca Ludwig produced some magic in Top Qualifying on Friday evening, securing pole position with the #26 octane126 Ferrari and winning the Glickenhaus Trophy for the fastest driver in the “Green Hell” for the first time. His time of 8:09.469 minutes made him the only driver to go under 8:10 minutes and earned his family its seventh pole position at the “Eifel marathon”. His father Klaus Ludwig is the record holder with six poles at the Ring. This was Ferrari’s second pole position, after the Farnbacher team started from the front of the grid in 2011.

“Awesome! That is what I was hoping for. We had to rebuild the car and still had a few issues yesterday. But everything came together today. The tyres came to me after three corners and were then right in the operating window. That was a virtually perfect lap,” said Ludwig, whose second lap of 8:10.406 minutes would also have been sufficient for first place. In the end, he was 1.171 seconds faster than Brazilian Augusto Farfus in the #99 Rowe BMW. His time of 8:10.640 earned a place on the front row again for the Rowe team, which started from pole in 2021. “Super! We expected to be among the leading group, but not with such a close field. That is an indication of how exciting the race is going to be. I am very happy with qualifying,” said Farfus.

Third place went to Britain’s Jordan Pepper in the #7 Konrad Lamborghini, with Christopher Haase fourth in the #22 Car Collection Audi. The fastest Mercedes-AMG was the #12 Bilstein Mercedes-AMG with Luca Stolz at the wheel. The top Porsche driver was Nico Menzel in the #25 Huber Porsche.

Before the final showdown, four drivers still had to secure the final spaces in Top Qualifying and the hunt for the Glickenhaus Trophy and the best grid positions. Sheldon van der Linde in the #98 Rowe BMW, Maro Engel in the #4 Getspeed Mercedes-AMG, Matthieu Jaminet in the #27 Toksport Porsche, and Matteo Cairoli in the #28 Dinamic Porsche did the business and presented their respective team-mates with the unique experience of two laps of the “Green Hell” with the iconic circuit all to themselves. Maro Engel was unable to go in pursuit of his third Glickenhaus Trophy, having qualified fastest in 2016, 2019 and 2020. “There were yellow flags in Hatzenbach on my first lap. Then I went into full attack mode – I did not know where I would be able to make up time. I gave it my all and, fortunately, it was good enough.” Sheldon van der Linde’s time of 8:11.039 minutes was the best of the weekend at that point, having previously set the fastest lap time of all three qualifying sessions (8:14.771 minutes). “My lap was really clean. We delivered,” said the South African, who won both DTM races at the Lausitzring last weekend.

Grid walk for the fans on Friday evening

Even after the battle for pole position, the excitement continued for the spectators on the eve of the 50th staging of the 24h Nürburgring: On the Müllenbachschleife, the Falken Drift Show had fans in the packed viewing areas in raptures. Meanwhile, in the pit lane, the grid walk and autograph session with all the teams was also extremely well attended. Many other attractions, both on and off the track, make a visit well worth while on Saturday and Sunday: Tickets are available on the box offices at the Nürburgring, as well as the entrances to the spectator areas on the Nordschleife.

Now that the start positions for the 24h Nürburgring have been determined, the race can finally get started at 16:00 on Saturday. However, before the 135 participants commence their spectacular battle through day and night, spectators at the Nürburgring can enjoy a full programme. On the track, they will be treated to exciting motorsport with the Touring Car Legends, two races in the FIA WTCR, and the BMW M Race of Legends, which features unforgettable world-class drivers from 50 years of BMW M. The Legends exhibition on the ring°boulevard, the Ravenol big wheel in the paddock, and many other offers and promotions from partners make a visit well worthwhile. Anyone wishing to follow the Ring action from home need look no further than free TV partner NITRO, which launches its 27-hour non-stop live broadcast at 13:40. The official livestreams, on YouTube (www.YouTube.com/24hNBR) and the official homepage of the event (www.24h-rennen.de/live), also show continuous coverage of the full race.