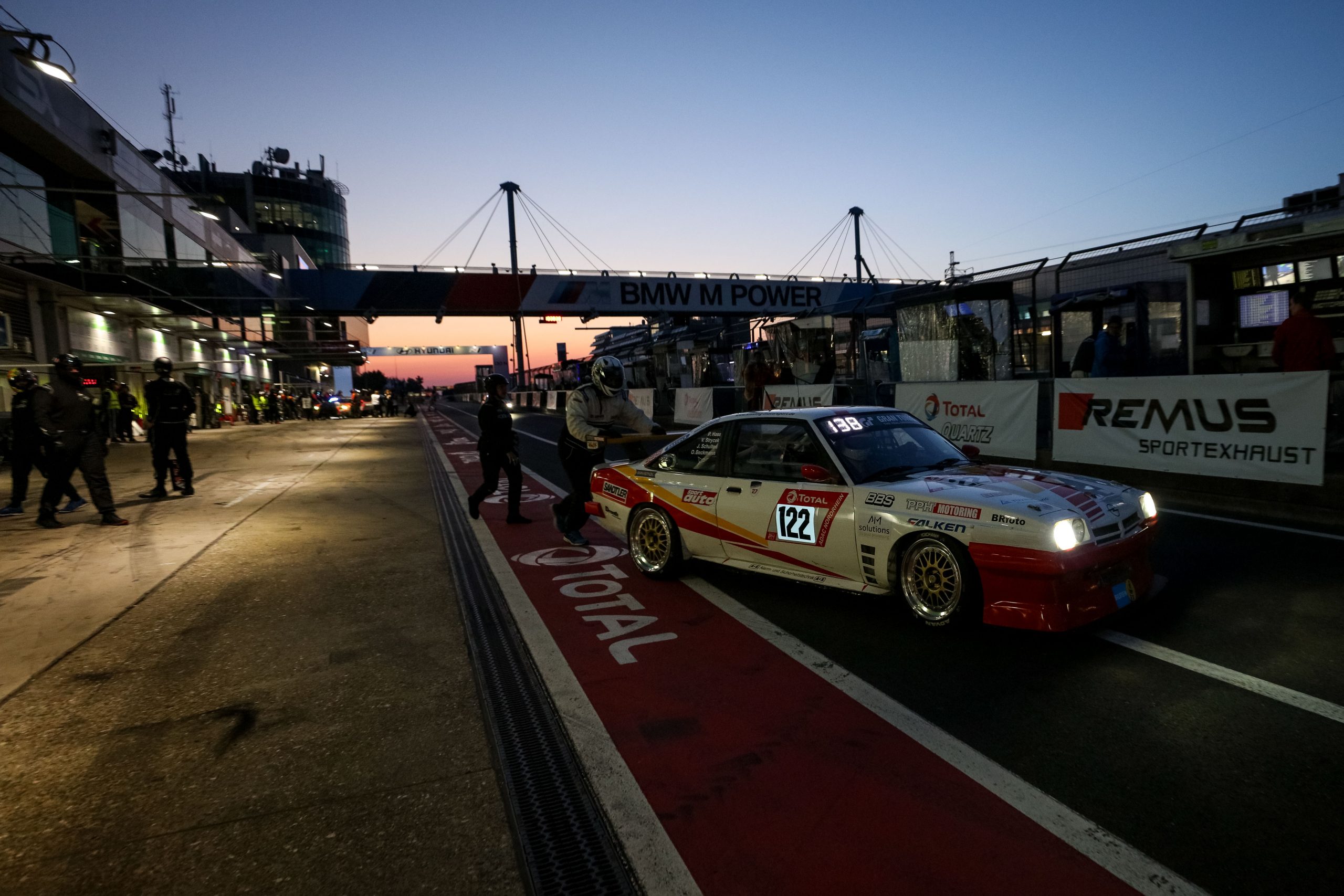 The night was clearly less dramatic than the first hours of the 24hr Race that caused a stir with numerous major and minor incidents. The leading Porsche #911 impressed with consistent lap times and defended its lead throughout the night but a hand full of vehicles entertained the crowds with a fierce fight for the positions behind. The gap between the second and the seventh-placed car amounted to just a minute, with several Porsches, Mercedes’ and Audis battling it out with one another. The toughest opponents of the leaders were the Mann-Filter-Mercedes #48 and the Frikadelli-Porsche #31. The Glickenhaus lost time due to a front-end collision and the Manta is back in the race.
#1 – Porsche 911 GT3 R (Lietz,Makowiecki,Pilet,Tandy)
01:17hrs: Spins in the Schwalbenschwanz area. The driver gets out of the car. Richard Lietz: “The kind of Nordschleife accident that can be witnessed often. I hope the other driver is fine. I’m okay but the car unfortunately isn’t. But that’s racing. If you don’t push you are too slow but if you push you things like this can happen.”
#3 – Mercedes- AMG GT3 (Buhk,Haupt,Jäger,Stolz)
02:20hrs: Luca Stolz: “My first double stint. It was very hectic, there were a lot of accidents and so, it proved to be difficult to find your rhythm. The car is running very well and I could gain some ground.”
#14 – Audi R8 LMS (Winkelhock,Haase,Fässler,Rast)
03:29hrs: Christopher Haase: “It was rather busy out there. At this time several drivers seem lose their concentration and consequently it was a difficult phase. Following our poor start we worked our way up to fifth to eighth position. Now we want to survive and find out where we will be in the morning.”
#29 – Audi R8 LMS (Mies,Rast,van der Linde,Haase)
05:09hrs: Christian Land: “Kelvin van der Linde will stay in the car for another stint. He is on a roll and sets top-class lap times. The stint before was contested by René Rast who also delivered in fine style. Therefore, we are closing in on the leaders consistently.”
#31 – Porsche 911 GT3 R (Dumas,Campbell,Müller,Jaminet)
03:02hrs: Mathieu Jaminet: “I could gain two positions at the beginning of my double stint. In the second stint the balance of the car changed and I had to opt for a more careful approach. There were accidents and Code-60 zones again and again but I tried to avoid risky situations as far as possible.”
#39 – Nissan GT-R Nissmo GT3 (Menzel,Liberati,Jöns,Vaxiviere)
01:56hrs: Crashes in the Hohenrain Chicane, Menzel gets out of the car.
#48 – Mercedes- AMG GT3 (Hohenadel,Arnold,Marciello,Götz)
04:07hrs: The second-placed team is ‘rewarded’ with a 32-second time penalty for ignoring flag signals.
#100 – BMW M6 GT3 (Walkenhorst,Ziegler,Schmidt-Staade,Tresson)
01:3hrs: Spins and hits the crash barriers in the Fuchsröhre.
#122 – Opel Manta (Beckmann,Hass,Strycek,Schulten)
04:56hrs: The Opel Manta is back. Following a multi-hour repair the idol of the fans rejoins the race. After a short check-up lap the car returns to the pits, is subjected to another extensive check and rejoins the race with Peter Hass behind the wheel.
#705 – SCG 003C (Mutsch,Fernandez-Laser,Mailleux,Simonsen)
01:31hrs: Thomas Mutsch comes in for an unscheduled stop. The left front of the SCG003C is damaged and the car needs a new front.
01:47hrs: The repair works are completed and Thomas Mutsch rejoins the race. Felipe Laser: “Thomas unfortunately was involved in a collision. A real shame as we lost a lot of ground and won’t be able to make up for it. But giving in isn’t an option and therefore, we will keep on pushing.”
#911 – Porsche 911 GT3 R (Bamber,Christensen,Estre,Vanthoor)
Michael Christensen: “We are fast but you have to be careful out there to not get involved in an incident. It was close twice, in my stint, but nothing happened so far.”
06:02hrs: Nicki Raeder: “We are happy with holding the lead. But a two-minute lead can be lost quickly if you make a mistake in a Code-60 zone because of poor visibility. We currently won’t use every overtaking opportunity but on the other hand, the lads aren’t too good when it comes to driving really slowly.”
06:15hrs: New brake discs were held ready but then, the leading Manthey Porsche rejoins the race just on fresh tyres and refuelled.
06:05hrs+++|The night now is officially over. Instead of the reflecting display panels the marshals now ´will use the flags again.