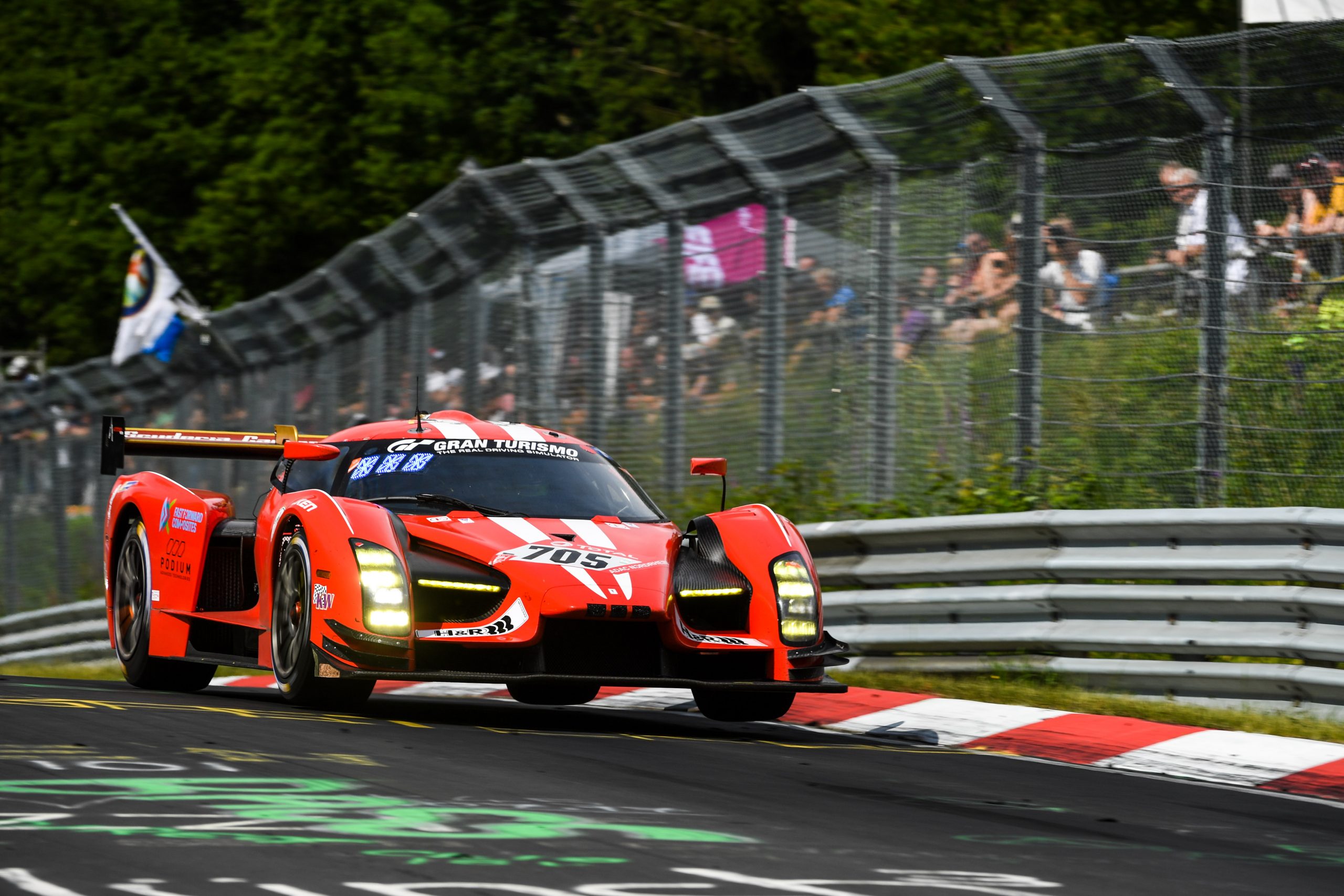 The Manthey Racing Porsche #911 defends its lead into the night and extends it to about 2:50 minutes. The fierce battle for the positions behind it is continued and spiced up by several dramatic incidents. The long-time leaders for instance, the Mercedes-AMG GT3 #2, has to retire after a close encounter with a lapped car. Afterwards, the Scuderia Cameron Glickenhaus moves up to second but is pressurised by the Mercedes-AMG GT3 #48. Frikadelli Racing’s Porsche 911 GT3 #31 races on fourth position into the night, followed by the fastest Audi R8 LMS, the #1 of Audi Sport Team Car Collection. The last BMW M6 GT3 that is still racing, representing the Walkenhorst colours, holds 24th position at the beginning of the 10th hour.
#2 – Mercedes- AMG GT3 (Christodoulou,Engel,Metzger,Müller)
Dirk Müller: “I experienced the full Monty. I drove from the day into the night. The Porsche was lucky to have just one Code 60 while I had to cope with two. Therefore, it was able to suddenly close the gap. We are the two fastest cars in the field – that was fun.”
23:05hrs: +++The Black Falcon-Mercedes #2 and the Gazoo-Toyota #90 collide in the Yokohama-S. Pits after a short lap. The Mercedes is pushed into the garage and the team checks the front of the car. Adam Christodoulou exits the vehicle. Maro Engel on Adam’s accident: “Unfortunately the steering gear was damaged and we need a longer repair stop. Adam isn’t to blame. The incident was the result of a misunderstanding. It hurts but what can you do? Nonetheless, we can be proud of our weekend performance.”
00:05hr: The Black Falcon Mercedes-AMG GT3 that held the lead for quite a while is officially retired.
#8 – Porsche 911 GT3 R (Slooten,Luhr,de Leener,Jans)
22:55hrs: Receives a 5:32-minute penalty for ignoring the pit-lane driving regulations and causing a collision.
#16 – Mercedes- AMG GT3 (van der Zande,Vautier,Seyffarth,Heyer)
Team Principal Adam Osieka: “We are really happy with the race so far as we didn’t encounter any problems. The cars are running absolutely flawlessly. The competition on the track, however, is really tough. We want to survive the night unharmed – to achieve this goal is extremely important. A short time prior to the start we had a problem with the car lifter of #16 and have to improvise now. During the pit stops of #16 the guys now have to the lifter with car jacks throughout the race as the left piston doesn’t work.”
#18 – Mercedes- AMG GT3 (Vettel,Ellis,Ludwig,Szymkowiak)
Fabian Vettel: “To race into the night was an amazing experience. I realised how the fans began to set fire to their grills. Then the smell of fried sausages began to fill the air. You smell it and start to get slightly hungry. A great feeling. On the other hand, you drive through the wads of smoke of the huge campfires and your eyes begin to burn. It wasn’t easy but a great experience. We currently are doing quite alright but we have not even reached race half-time. I was right behind when the bad accident at the Döttinger Höhe happened. Suddenly I saw a car flying through the air and then the entire track was full of debris. That demonstrated how fast your race can be over – even on a straight where you think that nothing can happen.”
#44 – Porsche 911 GT3 R (Bachler,Bergmeister,Ragginger,Werner)
Martin Ragginger is replaced by Klaus Bachler and says: “Actually everything was quite okay. We encountered quite a lot of trouble in the early stages but now, everything is running according to plan. The car once again is running really well. A pity for everybody that our start was rather mediocre. Now we try to make the best of it.”
#705 – SCG 003C (Mutsch,Fernandez-Laser,Mailleux,Simonsen)
Felipe Laser: “Driving into the night was really nice. There was a long-term Code-60 zone in the Brünnchen area and so, you could really enjoy the atmosphere along the track, there. Our pace was good. Now we hope that we will be able to continue on this level throughout the night.”
#911 – Porsche 911 GT3 R (Bamber,Christensen,Estre,Vanthoor)
Kevin Estre: “The Mercedes had to cope with some bad luck in the traffic what helped me to close in on it quickly. I used the first chance I was offered and I think that he deliberately drove slightly to the left. But I didn’t lift and kept on pushing. So he moved back to the right, I had more room and passed him.”