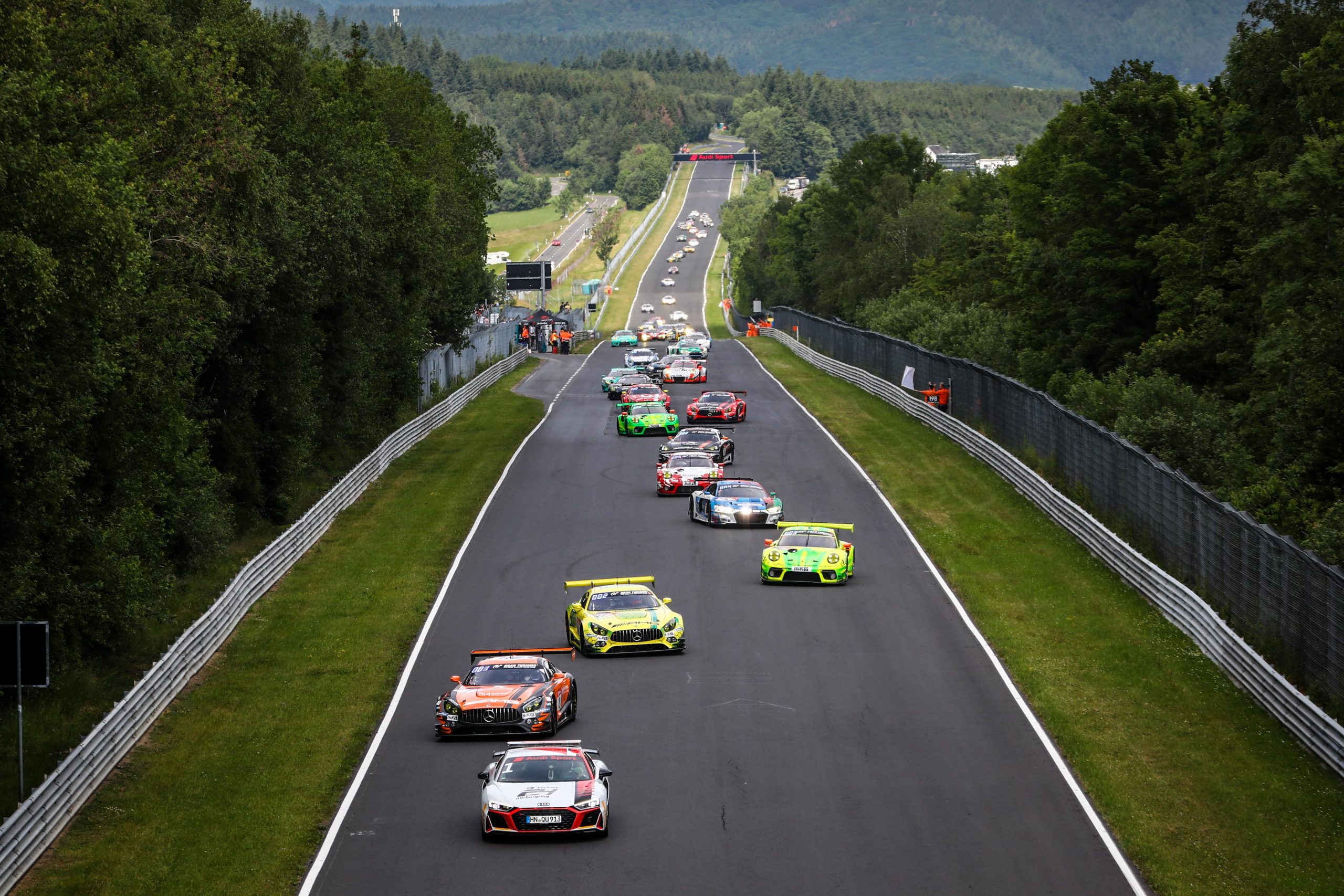 The sixth hour was kicked off by a new leader: In his Manthey Racing Porsche 911 GT3 R #911 Kevin Estre passed the previously leading Mercedes-AMG GT3 #2 at the Döttinger Höhe. Up to the end of the seventh hour, with 46 laps completed, the Manthey Porsche had opened a 30-second gap over the second-placed car. Meanwhile, the battle for third position proved was fierce and spectacular. Three cars – the Mercedes-AMG Team Mann Filter Mercedes AMG GT3 #48, the Frikadelli Racing Porsche 911 GT3 R #31 and the Scuderia Glickenhaus SCG 003C #705 entertained the crowds with enthralling motor racing. In the seventh hour, Felipe Fernandez Laser won the battle for the time being to continue in third place.
#16 – Mercedes- AMG GT3 (van der Zande,Vautier,Seyffarth,Heyer)
Tristan Vautier: “I hadn’t covered a big mileage on the Nordschleife, this year. Therefore, I just couldn’t wait for my first stint. „We currently hold a top-10 position and doing so was our goal for the first half of the race. I had a nice battle with the Land Audi and really enjoyed it.”
#30 – Porsche 911 GT3 R (Abbelen,Müller,Renauer,Preining)
21:17hrs: Is pushed into the garage. The Porsche loses oil. Alex Müller: “In the cooler conditions the car handled really well on the mediums. The lap times improved more and more but all of a sudden, we got vibrations in the steering system and at the exit of the Karussell the power steering stopped working completely. Now we will try to repair the car.”
#31 – Porsche 911 GT3 R (Dumas,Campbell,Müller,Jaminet)
Sven Müller: “The stint was big fun. We made good progress on our way to closing in on the leaders. And the racing is very close at the front end of the field, with the battles on the track being extremely tough. “Partly, seeing anything was really difficult due to the setting sun. Now we have to try to make no mistakes and survive the night unharmed. The car handles absolutely perfectly. As I see it, the Nürburgring 24h Race is the most difficult race worldwide for both man and machine. The material has to take extreme punishment – you fly through the Karussell and jump over bumps. At the end of the day it’s crucial to keep your mistake rate as low as possible and achieve a good performance.”
21:48hr: While entering the Schwedenkreuz and in the battle with another car Sven Müller has to draw aside to avoid a safeguarding vehicle and hits the crash barriers.
#38 – Nissan GT-R Nissmo GT3 (Wlazik,Menzel,De Oliveira,Burdon)
21:20hrs: Philipp Wlazik: “It’s really tumultuous out there but the atmosphere is outstanding. Driving into the sunset is just great. Yes, there are places where you are blinded by the sun and have your problems to recognise the flags. After the bad accident with an M6 in the Brünnchen area I had Code 60 in this section throughout my eight laps. It makes you lose your rhythm again and again. Now we have to have a clean race in the night and then we will see where we will be tomorrow morning.”
#44 – Porsche 911 GT3 R (Bachler,Bergmeister,Ragginger,Werner)
Dirk Werner: “Unfortunately, a tyre damage forced us to come in for a longer repair stop. The damage was caused by debris on the track. Now we are 51st but the lads succeeded in getting the car ready to race again. We witnessed several bad accidents – a fact that leaves me puzzled as the track conditions are fine.”
#48 – Mercedes- AMG GT3 (Hohenadel,Arnold,Marciello,Götz)
Maximilian Götz: “My stint was somewhat frustrating as there were so many Code 60 situations. I hadn’t a single free lap and several nuts around me that activate the left indicator and drive to the right. I really lost time but this applied to all of us. In these situations you have to stay focused, struggle through and avoid making mistakes.”