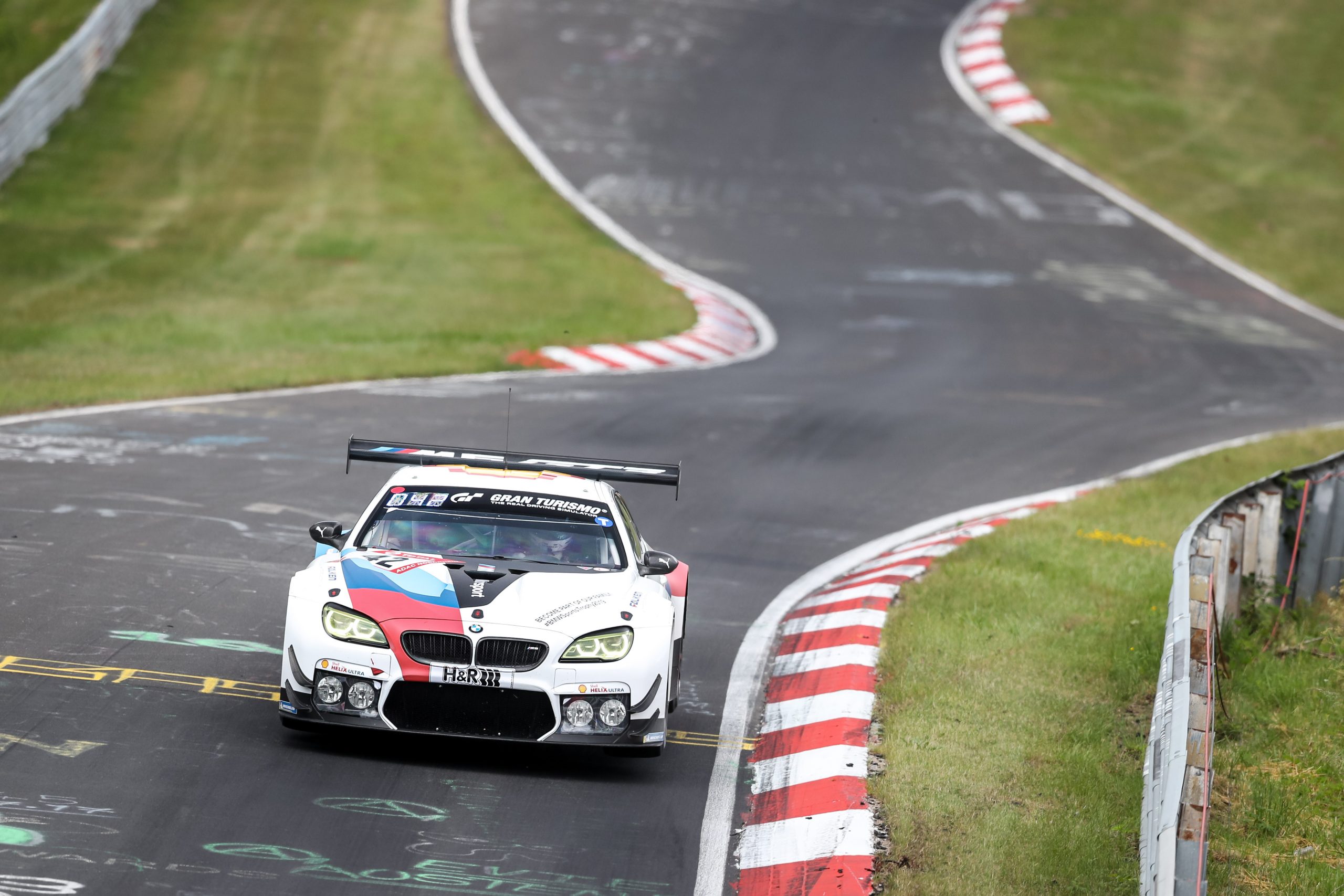 At the end of the fifth hour, the Mercedes-AMG Team Black Falcon #2 still holds the lead with the Manthey Racing Porsche 911 GT3 R #911 following in second position. With 33 laps completed, the best Audi (#14, Audi Sport Team Car Collection) is fifth. Meanwhile, the BMW teams encountered a disastrous first quarter of the race as four BMWs M6 GT3 were forced into retirement by accidents or technical problems. Surrounded by GT3 cars, the Glickenhaus holds seventh position. Short before the fifth hour was over the fans had to cope with a major blow as the Opel Manta, the idol of the fans, was involved in a bad crash and had to be retired.
#14 – Audi R8 LMS (Winkelhock,Haase,Fässler,Rast)
Markus Winkelhock: “Currently things aren’t looking too bad. We are moving around the eighth position and that’s far better than what we expected. But there still is a very long way to go. We focus on making no mistakes – and then we have to wait and see what will be the result of this approach.”
#16 – Mercedes- AMG GT3 (van der Zande,Vautier,Seyffarth,Heyer)
Jan Seyffarth: “The first stint was difficult due to the extremely high temperatures. We didn’t want to use the hardest tyres as our experience with them is limited. Therefore, we opted for the mediums but they tended to get too hot and consequently I was hampered by understeer. At sundown, with the temperatures falling, the car handled far better and I could start pushing. Now Renger is in the cockpit and will push harder. And we will do even better in the darkness, with the lower temperatures
#29 – Audi R8 LMS (Mies,Rast,van der Linde,Haase)
Christian Land: “We succeeded in surviving the first hours without making any mistakes and already worked our way up to eighth. But as our opponents are racing on different strategies it’s difficult to say where we are really standing.”
#44 – Porsche 911 GT3 R (Bachler,Bergmeister,Ragginger,Werner)
20:20hrs Following a tyre damage on the Nordschleife the tread has torn off the ABS sensor. Therefore, the car had to come in for a longer repair stop.
#98 – BMW M6 GT3 (Eng,De Phillippi,Blomqvist,Jensen)
19:01hrs The Rowe BMW stops in the Hohe Acht area due to a technical failure and has to be towed away.
19:32hrs: The early end of the race for Rowe Racing. When #98 has stopped on the track the team packs up and also pushes the #99 into the tent. The car lost too much time due to a suspension failure but was kept ready as support for the sister car.
Team Principal Hans-Peter Naundorf: “The saddest and poorest 24h Race we ever encountered. To have lost both cars just 3.5 hours into the race is absolutely disappointing. #98 driver Mikkel Jensen said that he had a close encounter – that resulted in a radiator failure.”
#99 – BMW M6 GT3 (Catsburg,Wittmann,Krohn,Edwards)
Following a long repair stop due to a suspension failure, the car rejoins the race with John Edwards behind the wheel – but returns to the pits following just one short GP-circuit lap. John Edwards: “We repaired the damaged suspension but the car possibly suffered a consequential damage. But we now have the task to possibly support the other car anyway – for instance by testing other setups or tyre combinations.”
#101 – BMW M6 GT3 (Krognes,Pittard,Ordonez,Yelloly)
18:44hrs Walkenhorst has to retire the car.
#122 – Opel Manta (Beckmann,Hass,Strycek,Schulten)
20:28hrs Collision with the cars #46 and #52 at the exit of the Mercedes Arena. Olaf Beckmann has to park the idol of the public with a damaged front and a torn off left front wheel.
#705 – SCG 003C (Mutsch,Fernandez-Laser,Mailleux,Simonsen)
18:44 Mailleux sets a new fastest race lap: 8:19.670 min
#911 – Porsche 911 GT3 R (Bamber,Christensen,Estre,Vanthoor)
Laurens Vanthoor: “My stint wasn’t easy. It’s difficult to find the proper line in the heavy traffic. You just have to keep your cool and avoid taking too many risks. I had bad luck regarding a code 60 that cost me a lot of time compared to the Mercedes. But there still is a long way to go.”
20:08hrs: The Schnitzer BMW #42 and the Hyundai TCR #170 crash and have to retire.