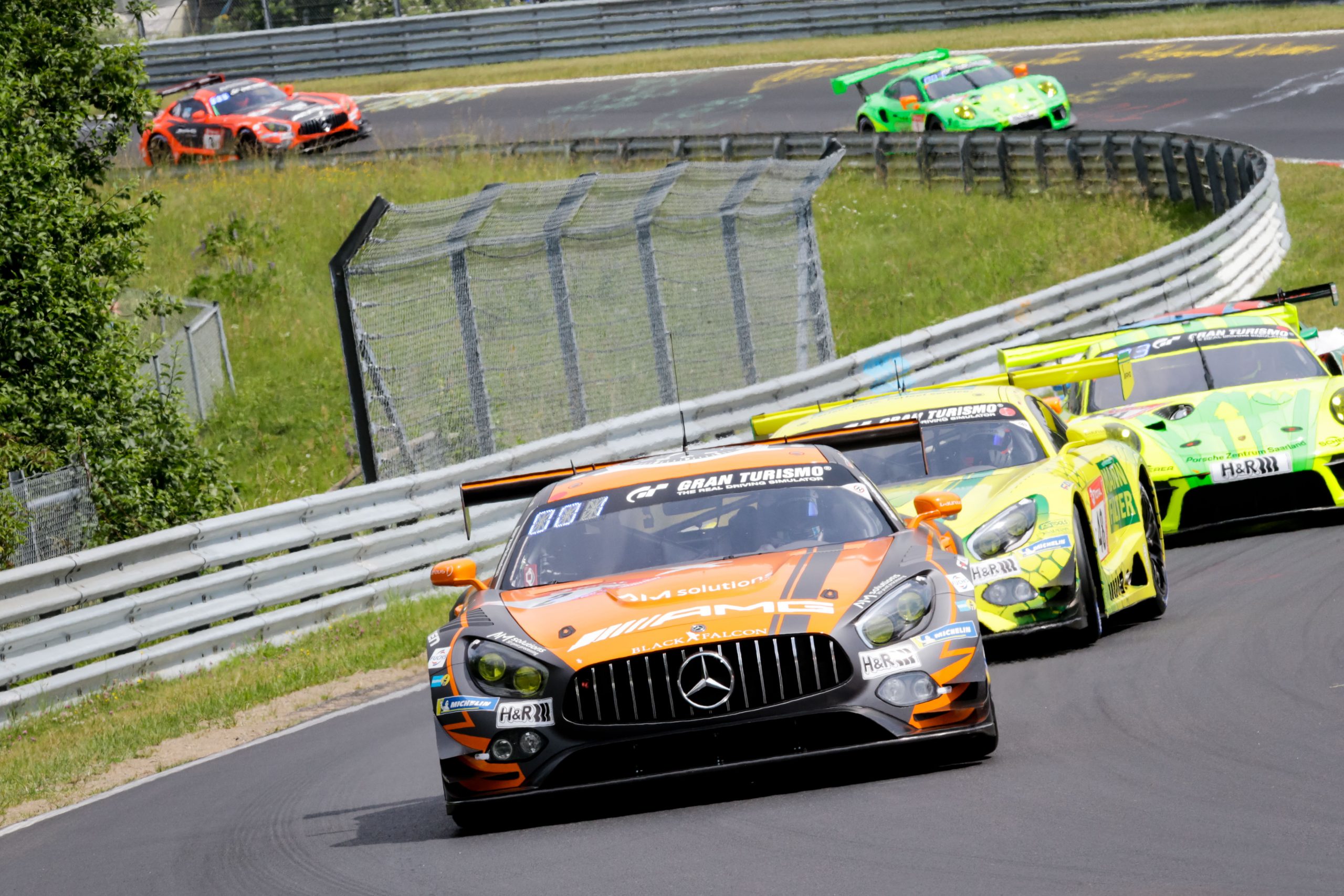 In the second and third hours of the race the Mercedes-AMG Team Black Falcon Mercedes #2 kept on defending its lead against the Porsche 911 GT3 R #911. Behind the two leaders, the Audi Sport Team Car Collection R8 #14 and the ROWE Racing BMW M6 GT3 #98 alternated – depending on the pit stops – in third position. The second Manthey Porsche – #1 – lost its position among the front-runners due to a damaged tyre. The best non-GT3 competitor is the Glickenhaus SCG003C in fourth position.
#1 – Porsche 911 GT3 R (Lietz,Makowiecki,Pilet,Tandy)
Patrick Pilet: “It was as good start and I could work my way up from fifth position to third. I lost some time compared to the two leading cars but in a 24h race you have to assess the risks correctly and mustn’t be too aggressive in the traffic. The car is running flawlessly and there still are many kilometres to be covered.”
17:14hrs: The reigning champions suffer a damaged tyre in the Kesselchen area. Due to the puncture and the time they lost while cruising back to the pits the team dropped back to 35th place.
#2 – Mercedes- AMG GT3 (Christodoulou,Engel,Metzger,Müller)
Maro Engel: “The starting phase ran really well and I was able to defend the lead. Balance and performance of the car are good. There was a lot of traffic and I had a moment with a slower car. The atmosphere out there is fantastic. Thanks for the huge support.”
#3 – Mercedes- AMG GT3 (Buhk,Haupt,Jäger,Stolz)
Luca Stolz: “The information lap with all the fans was pure madness – goose bumps to the max. My start was good, I hadn’t any contact. At the end of my last lap I could pass the GetSpeed Mercedes-AMG GT3 and den Phoenix Audi. Our car runs perfectly and now, Hubert Haupt is contesting the next stint.”
#5 – Audi R8 LMS (Bleekemolen,Kolb,Schramm,Stippler)
16:39hrs: Yelmer Buurman: “It was big fun. I lost a position during the start but was able to work my way back up. Afterwards I was able to gain even more ground. A good start for us.”
#8 – Porsche 911 GT3 R (Slooten,Luhr,de Leener,Jans)
17:59hrs: Jan-Erik Slooten: “The first stint was good. A lot of chaos out there but everything was okay. I had two minor close encounters with other cars as it’s really tight on the track. But everything went well
#13 – Dodge Viper CC (Albrecht,Dittmann,Reinhard,Lachmayer)
17:03hrs Accident in Metzgesfeld area, continues.
#22 – Ferrari 488 GT3 (Weiss,Weiss,Dontje,Still)
Leonard Weiss: “Not too bad for my first start. A few cars could pass me but I’M happy with the performance so far. Furthermore, there still are a few hours to go.”
#38 – Nissan GT-R Nissmo GT3 (Wlazik,Menzel,De Oliveira,Burdon)
17:35 JP Oliviera: “I made a great start and certainly gained 10 positions over the course of the first stint. We are racing at a reasonable speed and manage the race. I’m happy with the car and had a nice battle with Fässler and Mies. It’s my first 24h race and I’m amazed about the numerous contacts I had.”
#42 – BMW M6 GT3 (Farfus,Tomczyk,van der Linde,Scheider)
Augusto Farfus: “Unfortunately I was hit just a short time after the start and spun. Very frustrating. Fortunately, the car wasn’t damaged and runs well. And the race still is long. We definitely will give our very best and really go for it to make up for the lost ground.”
#44 – Porsche 911 GT3 R (Bachler,Bergmeister,Ragginger,Werner)
17:44 Misses the pit-lane entrance and has to complete a short extra lap on the GP circuit.
#55 – Ferrari 488 GT3 (Grossmann,Trummer,Hirschi,Prinz)
17:31hrs The Ferrari is driving burning around the GP circuit.
#99 – BMW M6 GT3 (Catsburg,Wittmann,Krohn,Edwards)
With a damaged front the BMW M6 GT3 comes in for an unscheduled stop and is pushed into the garage for repair works. Jesse Krohn explains that he was involved in a collision with another car. “When I rejoined the race there was very slow Porsche ahead of me. I went next to him to pass him. In turn one I went as far to the inside as possible but he went too far to the inside, nevertheless, and hit me. I don’t know if he didn’t see me.”
#911 – Porsche 911 GT3 R (Bamber,Christensen,Estre,Vanthoor)
16:36hrs: Kevin Estre: “The car is running really well but working your way through the traffic was difficult. The first stint always is somewhat difficult as the drivers of the slower cars have not yet found their rhythm. Several times it was really close. I’m happy that we are among the front-runners. The information lap was absolutely awesome – as usual.”