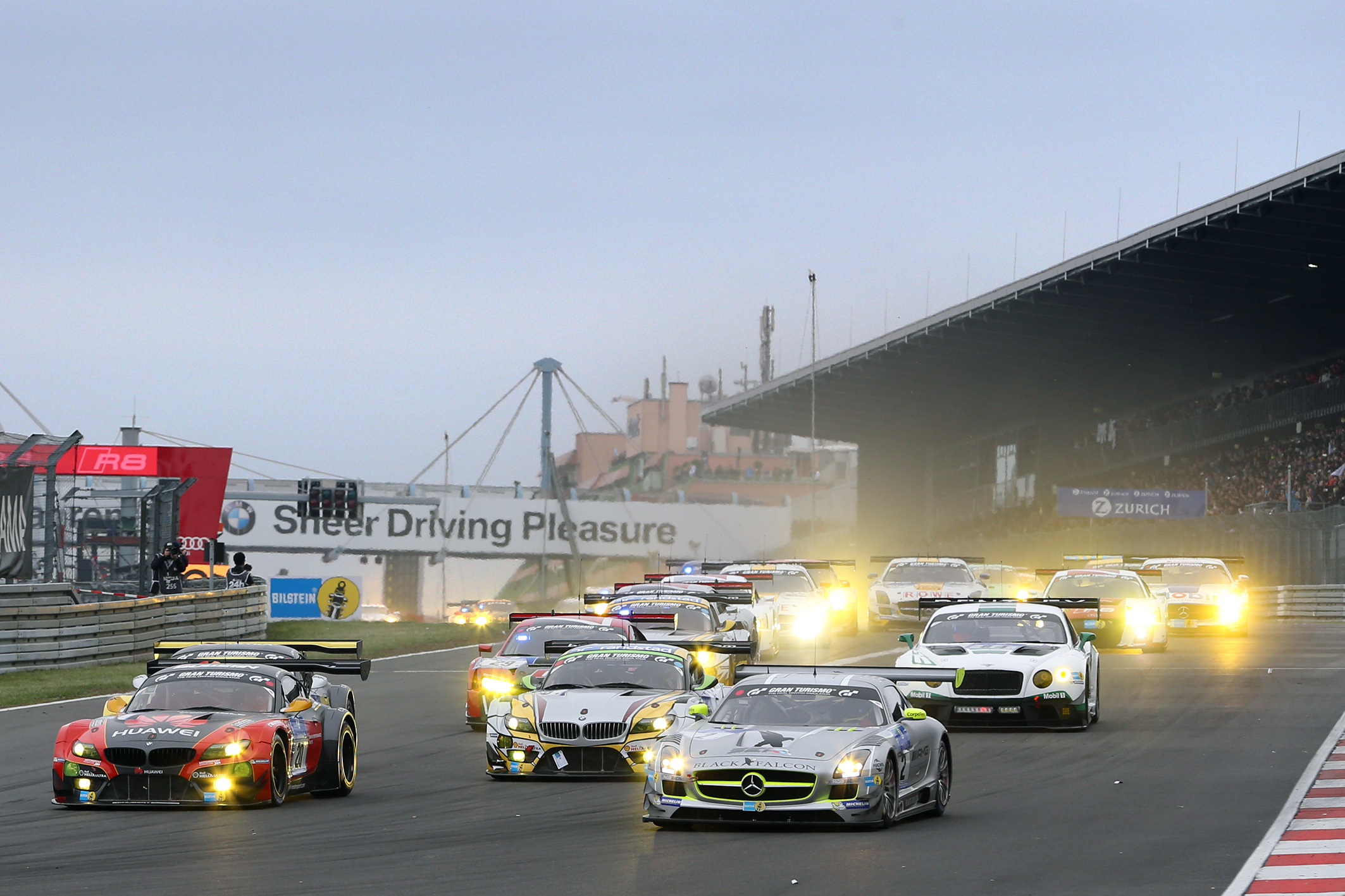 The same procedure as every year: the 2016 ADAC Zurich 24h Race once again will be the race of the year, for the visitors. And as usual, this title – awarded in the reader poll of an internet portal – suits the event perfectly. After all, the spectators that make the trip to the legendary Nürburgring Nordschleife will be provided from 26th to 29th June four days of enthralling action. Some 160 vehicles on the 24h-race grid will battle it out for the prestigious win in the greatest race of the year, with about three dozen of them having to be regarded as serious race-win contenders. The stunning GT3 vehicles entered by Audi, BMW, Mercedes-AMG and Porsche meet the challenge represented by the international competition: among them super cars entered by Aston Martin, Bentley, Lamborghini, Lexus and Nissan or the spectacular Scuderia Cameron Glickenhaus prototypes. Never ago, the 24h-race featured such a top-class field and so, making a prediction regarding the outcome is more difficult than ever. Furthermore, the World Touring Car Championship, WTCC, will contest two championship rounds on Saturday noon 28th May), thus providing the crowds another special highlight prior to the 24h-race start.
With a one-two-three in the third round of the 2016 Endurance Championship Nürburgring, VLN, held two weeks prior to the 24h race, BMW underlined their ambitions to become a major force in the battle for the win in the endurance classic. In this final acid test prior to the season highlight, three BMW M6 GT3 racers and their-top-class driver line-ups made for a podium lock-out – and for a lot of happy faces in the BMW camp. Afterwards, Jörg Müller – who won the race together with 2014 DTM-Champion Marco Wittmann and Finland’s Jesse Krohn – was beaming and talked about “A perfect race.” With this triumph, the BMW teams secured the first VLN race of the brand-new car.  “Making it to the podium always is great„” said former DTM Champion Martin Tomcyk, “Although this wasn’t one of our main priorities in this preparation race.” The German contested the race together with Lucas Luhr and John Edwards (USA) to finish second, in the end. “We wanted to optimally prepare for the season highlight and the final test went really well for us. Now we are curious to find out in the 24h race where we are standing compared to our opponents.”
Well-balanced situation in the preparation races
The careful scepticism of the BMW drivers seems to be justified. After all, other competitors also succeeded in shining, in the preparation races. Two of the VLN rounds were won by an Audi R8 LMS and in the Qualifying Race 24h Race, the Mercedes AMG Teams HTP and Haribo celebrated a one-two. Always close behind were the Porsche teams, with reigning World Endurance GT Champions being the spearhead. They will contest the 24h classic with two 911 GT3 R on behalf of Porsche. For the fans, this virtually favourite-less situation means that they may look forward to a particularly thrilling race in the Green Hell.
What a programme: attractions galore from Wednesday to Sunday (all the times CEST)
On Wednesday, 25th May, even before the motor racing programme gets going, the visitors will be provided a first highlight: from 16:00hrs, fans and competitors will meet during the Adenauer Race Day, held  in the heart of Adenau. And with a special permit, numerous vehicles of different competitors also will drive in a parade from the circuit down to Adenau’s city centre. And from Thursday, it’s time for the days of thunder at the Nordschleife. Highlights of the day are the first practice session, from 15:4hrs) and the night qualifying (from 20:00hrs) for the 24h race. And on Friday, the grid positions will be determined. Following the second qualifying session in the morning one will know which competitors made it to the Top 30 Qualifying, the spectacular time-trial session at the Nordschleife that will determine the positions on the first 15 rows on the grid.  And in the afternoon, at 12:45hrs, the WTCC racers will battle it out for the grid positions. In the evening, the crowds will be wowed by the Stihl Timbersports Show in the Fan Arena (Historic paddock) and the Falken Drift Show in the Müllenbachschleife. If you don’t want to miss any bit of the Saturday action you have to get up early in the morning. The day will begin with the 24h-race warm up (08:15hrs) that will be followed by the two WTCC races (from 11:25hrs). And at 15:30hrs, the 24h race will be started.