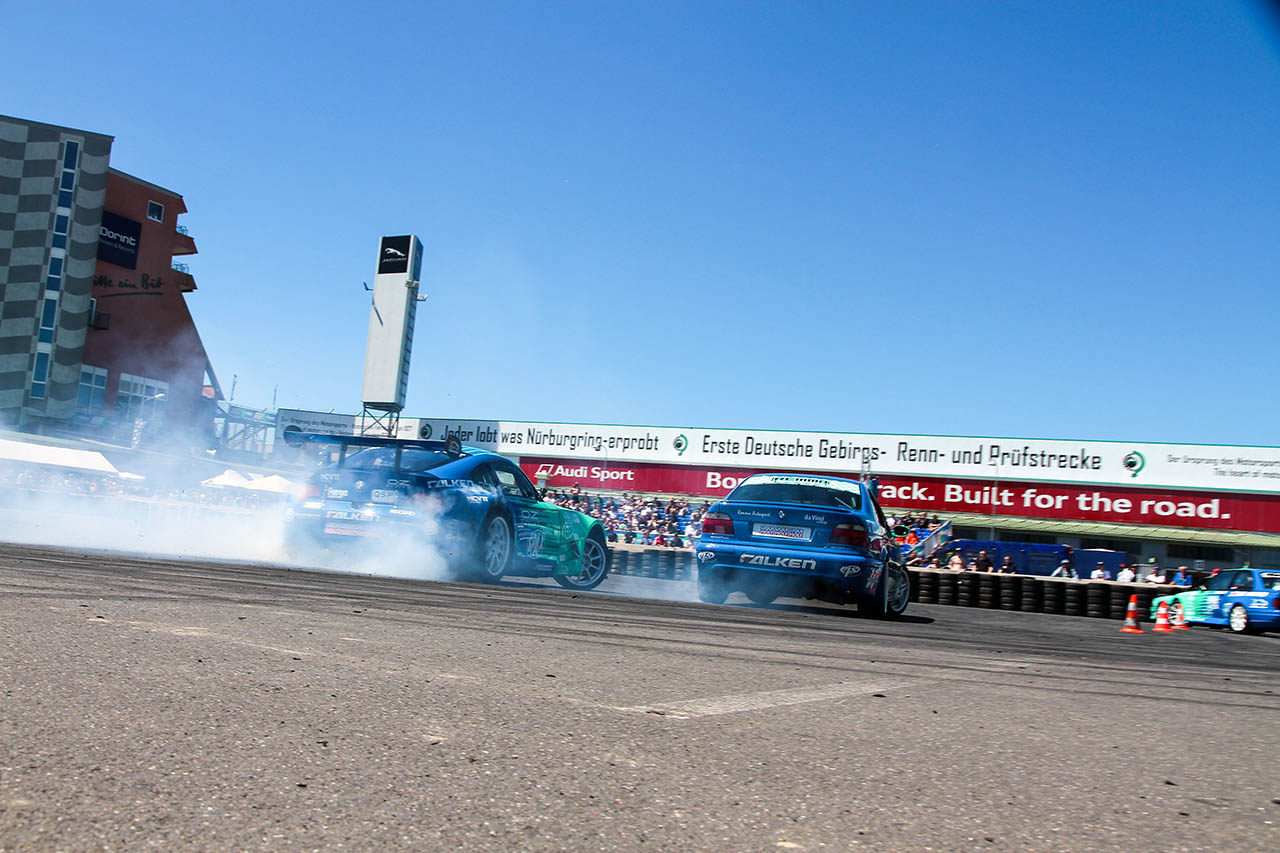 Roaring engines, burning rubber and the smell of action and excitement: that’s what the motor-racing enthusiasts will witness in the Nürburgring Fan Arena. The show programme in the historic paddock has got what it takes to thrill everybody – from the power-slide fan to the wood-chopping or motorbike enthusiast. From Thursday to Sunday, the programme features the most different shows – with national and international protagonist that will thrill the crowds with their skills. And this year, several never witness acts will even add to the fantastic atmosphere.
One of the new acts in this year’s programme is Lithuania’s Arūnas Gibieza with his action-packed Red-Bull motorbike stunt show that takes the spectators’ breath away. “I am slightly excited but truly look forward to my first appearance at the Nürburgring,” Gibieza said a short time before his show in the historic paddock, “I never have been here, to date, but I heard a lot about the circuit. Now I finally am here and look forward to my first appearance at the Nürburgring.” Furthermore, Gibieza raves about the great atmosphere among the spectators on the stands and the really great support of his Red Bull Team that gives him encouragement and turns his stay in Germany into a particularly pleasant experience.
A very special stunt
Also unique is this year’s appearance of the Red-Bull Drift Brothers Joe and Elias Hountondji who are going to perform their first drift-run on the Nordschleife. “It is really, really unique that we will be drifting around the Nordschleife prior to each trace,” said  Joe Hountondji with a touch of pride in his voice. “That’s something never witnessed in the past.” Two weeks ago the brothers drove their first laps on the Nordschleife: at first two hours for learning the track and then a drifted lap. “Unfortunately we can’t complete a full lap drifting on one set of tyres – what means we hat to incorporate a tyre change,” the brothers revealed. Then, the lap with tyre change halfway around the Nordschleife also was practiced. The Hountondjis underline that it’s very important for them that nothing goes wrong and that the circuit isn’t damaged as they are well aware that the 24h-Race drivers are the main attraction of the event and can’t and won’t accept any delays of the race at the Nordschleife. “The biggest difference is that the run-off areas at the Nordschleife with the distance between track and crash barriers being extremely small,” the brothers explain. “Usually we perform our show at tracks with run-off areas with gravel traps. Here, a single mistake will result in a broken car and in a delayed race – what must be avoided by all means.”  The drift brothers explain that they love their sport, think that it has got lot of potential and that they hope to be able to bring the sport nearer to a bigger target group.
“Inter alia, we also will co-comment in the live stream and talk about what we have done and how the drifting sport works and that this represents a huge chance for us.” The brothers have been coming to the 24h Race for three years, now, and this year, they finally have got some tine for visiting some of the fans and enjoying the Nürburgring atmosphere as they aren’t in action all the time. “Pure madness what the fans have organised here. Some of them even have got pools in the woods,” the pairing said smiling.
But not only the new acts find their place in the Fan Arena as the well-known shows also once again can be admired in the historic paddock. Attractions such as the Falken Drift Taxis that represent real crowd pullers year by year as the spectators who love power slides and burning rubber even can apply for a ride in the passenger seats of the cars.  Rides that can represent a hard test for the passenger’s stomach. For 10 years, now, Dutchman Rohan van Riel has been a member of the team and once again contributes to the show with ardour, this year. “I’m really delighted to once again be a part of the show,” he said. “It’s just great that we are so successful with what we are doing. In these sunny conditions the spectators are in an even better mood and driving in these conditions consequently is even bigger fun.”
Wood-chopping sport for and with the fans
In addition, the extraordinary Stihl Timbersports wood-chopping shows will entertain the crowds several times a day in the paddock, with the athletes thrilling the visitors with their fascinating and exhausting sport. In their first demonstrations they show how a trunk is trenched manually or with different motor saws and pique the curiosity for the great show competition in the evening.
A competition the sportsmen love to integrate the spectators into. Here, the fans also may demonstrate their skills on a saw. To date, the squad has been absolutely happy with their appearances and also enjoys the nice weather – also the higher temperatures mean more sweating for the athletes. “Tonight we will have modified saws on the stage, with more than 70bhp and 140 decibels – what should delight every motor-sport enthusiast,” said team-member Leonard Schäfer who massively looks forward to the show and the atmosphere in the evening.