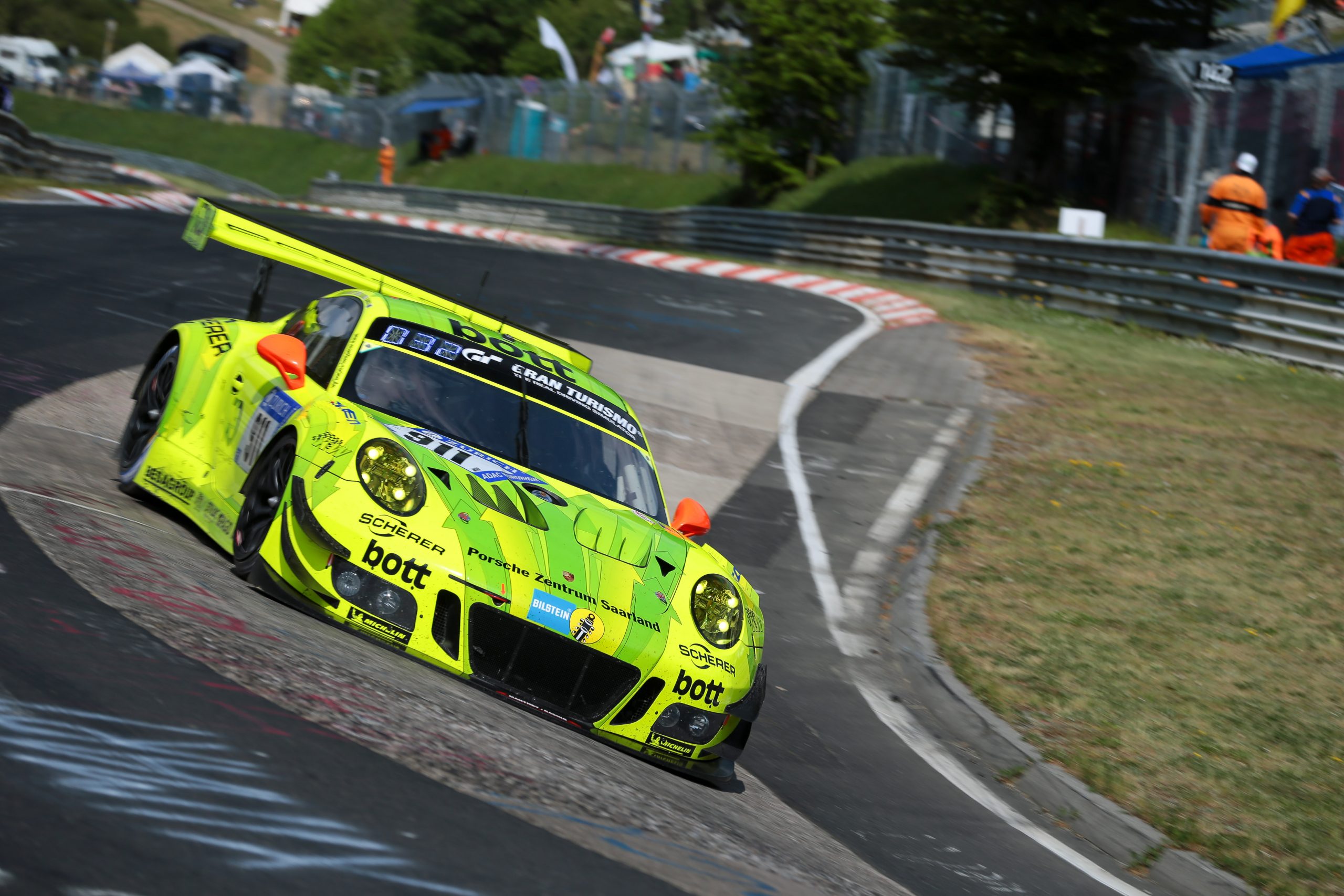 It was a true Porsche day at the ADAC Zurich 24h Race. In the Top-30 Qualifying for the main event, Belgium’s Laurens Vanthoor took his Manthey Porsche #911 to pole position.
With a fantastic 8:09.105-minute lap, the Belgian clinched the pole and outqualified fellow Porsche driver Sven Müller (Falken-Porsche #44) by 0.417 seconds. Norbert Siedler completed the Porsche success by finishing third in the Frikadelli Porsche #31. The best non-Porsche driver was Maro Engel who took his Black-Falcon-Mercedes to fourth. The 46th edition of the tradition-rich race will be started on Saturday at 15:30 hrs. And 45 minutes prior to the start Vanthoor will be awarded the Glickenhaus Trophy for the fastest driver on the legendary Nordschleife.
Vanthoor prevails in the ‘Battle of the Egos’
“It was a fantastic lap. After the problems we struggled with yesterday the mechanics virtually worked throughout the night – and today the car was just fantastic. It’s just incredible to have this fantastic track for you alone and go for it without having to care for traffic. Pure madness but just marvellous,” Vanthoor raved after his amazing lap around the traffic-free 25.378-kilometre combination of Nordschleife and GP circuit. “On the first flying lap I made a minor mistake but the second was virtually perfect. Now I’m happy that it’s over. The pole is a great initial position for the opening hours – but nothing else. Today it also was – to a certain extent – a battle of the egos: the ones of the teams, the manufacturers, the tyre manufacturers and, of course, the drivers too. The race tomorrow will be long and everything can happen throughout the 24 hours. Today was fun, tomorrow things are getting serious.”
Sven Müller who had held the provisional pole at the end of lap one and was beaten by just a few fractions of a second, in the end, also was happy: “I was mega fast. The lap was rather incredible. I gave my very best, this was the absolute maximum. Being out there for these laps was big fun. I’m proud of having secured second position on the grid.” For Porsche it was the first pole since 2008 and in that year, they also won the race.
With Nicki Thiim (Denmark) who finished fifth with his Aston Martin #7 and Jesse Krohn in the Rowe-BMW #98, another two manufacturers joined Porsche and Mercedes-AMG in the top 10. “It’s so fantastic to be out there alone. That’s something really special for a racing driver – a dream come true,” said Nicki Thiim. The Wochenspiegel-Ferrari #22 followed in 11th, the best Audi was the one of the reigning 24h-Race Champions, the Audi Sport Team Land vehicle #1, in 15th position.
In the second qualifying session held in the afternoon, the hunt for the 15 positions still available for the Top-30 Qualifying was hampered by numerous accidents, resulting in Code-60 periods. So, the teams that hadn’t already qualified for the time trial, had just a few laps to do so. And one of these laps were used in the closing stage by Laurens Vanthoor who leaped to provisional pole by setting the clearly fastest lap time of the weekend and crossed the line with his Manthey-Porsche #911 in 8:14.504 minutes. Nonetheless, this time should be nuked just a few hours later.
Porsche one-two-three in the 24h Classic Race
Earlier in the afternoon, the programme featured the 24h-Classic Race. The race was won by the Porsche pairing Max Struwe and Sascha Schwalme from the Youngtimer Trophy grid that celebrated its 25th anniversary in the 24h-Race support programme. The classic drivers Daniel Schrey and Michael Kühe gave Porsche the second and third places in the three-hour race.
In the FIA Touring Car World Cup, WTCR, Sweden’s Thed Björk took his Hyundai to his second pole of the weekend and hopes to also celebrate his first win, in race two on Saturday. In race one on Thursday, he was pipped by his French team-mate Yvan Muller. Second on the grid will be Belgian Frederic Vervisch, followed by Hungary’s Norbert Michelisz.