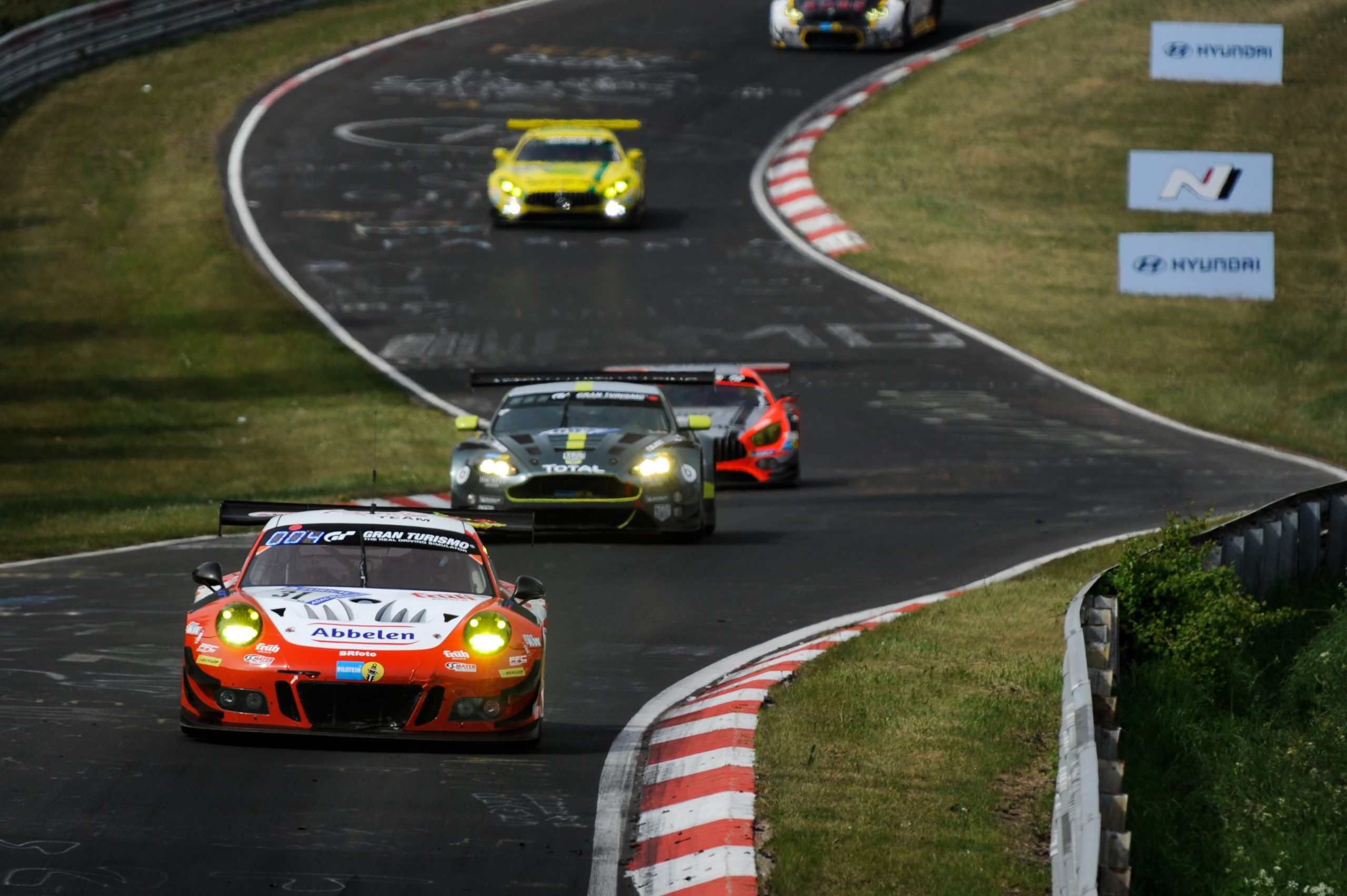 The battle for the lead between the Manthey Racing Porsche #911 and the Black Falcon Mercedes-AMG GT3 #4 is getting more intense. And depending on the pit-stop situation, the MANN Filter Mercedes-AMG GT3 #47 gets closer to the top 2. Despite the unscheduled stop on lap 2, the Manthey Racing Porsche 911 GT3 #912 has closed in on the front-runners. The Scuderia Glickenhaus in 13th position still is the best non-GT3 vehicle.
#4 – Mercedes-AMG GT3 (Engel,Christodoulou,Metzger,Müller)
20:04hrs Adam Christodoulou crosses the line in 8.17.631 minutes, thus setting a new lap record.
#24 – Audi R8 LMS (Winkelhock,Rockenfeller,Haase,Müller)
19:02hrs Nico Müller: “Things aren’t running exactly well for us. We can’t match the pace of the leaders. That’s not what we had hoped for although we knew that it wouldn’t be easy. I hope that it will get better when the temperatures drop.”
#25 – Audi R8 LMS (Mücke,Jöns,Fässler,Kaffer)
18:52hrs Stefan Mücke: “My stint wasn’t too easy. We tried to switch to another tyre compound but it obviously didn’t work properly. That wasn’t easy as the balance was difficult. But now have learned another lesson.”
20.13hrs Christer Jöns: “The team’s third stint was my first. You always need some time to familiarise yourself. They all are taking their cars to the limit and therefore, you have to be really careful. Our grip could be better and consequently we have to take a closer look at the tyre compounds. But others also have problems.”
#30 – Porsche 911 GT3R (Arnold,Müller,Henzler,Campbell)
19:19hrs Alex Müller reports: “My stint was okay. There was a lot of traffic and many Code-60 zones but that’s something everybody has to cope with. When it comes to the lap times we hold a position between fourth and eighth place. We are working our way up, focus on ourselves and do our thing.”
#31 – Porsche 911 GT3R (Siedler,Seefried,Laser,Jaminet)
18:51hrs Norbert Siedler has to stop in the Schwalbenschwanz area because his radiator was blocked by grass after a jink in the Schwedenkreuz area. Afterwards, the temperatures rose and the engine overheated,
#33 – BMW M6 GT3 (Dumbreck,Dusseldorp,Imperatori,Klingmann)
19:16hrs The M6 GT3 is pushed into the garage and jacked up. Jens Klingmann: “We had engine problems since stint two and now two sensors have to be changed. This unfortunately will take half an hour. Actually, going out again doesn’t make too much sense but we don’t give up.”
#35 – Renault RS01 (Schmidtmann,Hammel,Wittmer)
18:34hrs Stops in the Schwalbenschwanz area.
#44 – Porsche 911 GT3 R (Bachler,Müller,Ragginger,Werner)
19:05hrs Klaus Bachler is replaced by Sven Müller. Bachler: “Altogether, our stint was very good – but there were a lot of Code-60 zones. Once, the car ahead of us drove at just 40kph what cost us a lot of time.”
19:52hrs can’t draw aside while lapping a vehicle and hits the tail of the KTM XBow #201 ins Heck
#46 – Porsche 991 GT3 Cup MR (Ackermann,Lukovnikov,Csaba,Wiskirchen)
19:09hr puncture at the right rear wheel.
#48 – Mercedes-AMG GT3 (Hohenadel,Dontje,Götz,van der Zande)
20:02hrs Christian Hohenadel for Maxi Götz who says: “I passed several cars and battled hard. I could match the pace of the leader but unfortunately we are three laps behind. A real shame.”
#98 – BMW M6 GT3 (Catsburg,Westbrook,Edwards,Blomqvist)
18:38hrs Nicky Catsburg: ”This was my first stint and I had done just two laps on the past days. Therefore I needed some time to acclimatise. I had a battle with the Porsche #912. It passed me. The Porsches seem to opt for a rather aggressive approach.”
#99 – BMW M6 GT3 (Sims,Krohn,De Phillippi,Tomczyk)
19:18hrs Connor de Phillipi: “I was in a traffic jam and the car ahead of me braked very easily while approaching a Code-60 zone. The result was a contact with an Audi R8 that suffered a radiator damage and lost coolant. I’m really sorry for the team. The damage possibly can be repaired but the chance of winning the race is over.”
#102 – BMW M6 GT3 (Farfus,Palttala,Krognes,Schiller)
18:44hrs Krognes: “I had a close encounter in turn one when I just had rejoined the action. The bonnet came undone and I had to return to the pits. This was really disappointing and destroyed our rhythm. But we can continue and will work as hard as possible. We now have to forget the incident.”
#912 – Porsche 911 GT3 R (Lietz,Pilet,Makowiecki,Tandy)
20:05hrs Now Nick Tandy sets a new lap record by crossing the line in 8:17.340 minutes. It’s the second new lap record within 30 seconds what demonstrates the perfect track conditions.