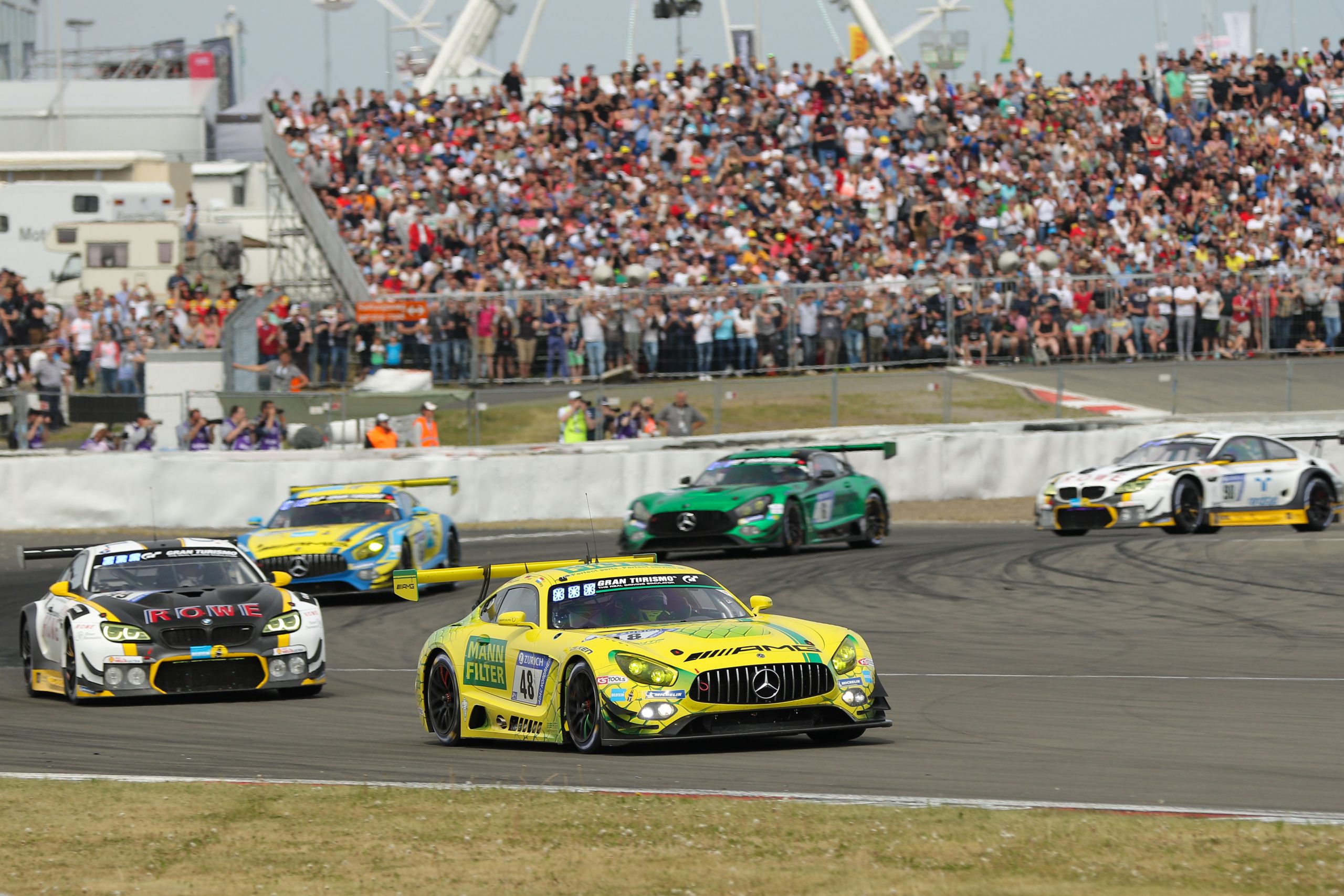 The Rowe Racing BMW M6 GT3 #98 benefits from its early stop and battles it out now with the Manthey Racing Porsche 991 GT3 R #911 for the overall lead. With the Black Falcon Mercedes-AMG GT3 #4 in third position and the Audi Sport Team WRT Audi R8 LMS #8 in fourth, the top-four positions are held by four different brands. The best non-GT3 team is the Scuderia Glickenhaus SCG003c in 12th position.
#4 – Mercedes-AMG GT3 (Engel,Christodoulou,Metzger,Müller)
17:40hrs Maro Engel: “The Porsches have found a lot of speed compared to the qualifying race, particularly on the straights. So, you have nearly no chance of matching their pace. I was just able to keep contact to the Falken Porsche, on the straight. Doing more was just impossible. In the second stint I had quite a number of battles, was in a lot of traffic – a lot of hot action. Therefor we stopped earlier than scheduled to get a clear track.”
#5 – Mercedes-AMG GT3 (Buurman,Jäger,Seyffarth,Stolz)
18:09hrs The Black Falcon-Mercedes-AMG will receive a penalty for falling below the minimum pit-stop time.
#7 – Aston Martin Vantage GT3 (Martin,Sorenson ,Thiim,Turner)
17:48hrs Nicki Thiim: “My pulse still is at the limit. I had completely forgotten how spectacular and intense it feels to race at this circuit. Everybody is really going for it.”
#12 – Porsche 911 GT3 R (Klohs,Kern,Olsen,Frommenwiler)
17:04hrs Nico Bastian is replaced by Gabriele Piana and says: “It’s running really well. We opted for a different strategy and pitted early. I had a quiet stint. The small ones still have to accustom to being lapped and we to overtaking.”
#17 – Porsche GT3 R (Christensen,Cairoli,Bergmeister,Lotterer)
16:42hrs Jörg Bergmeister: “It was a rather mediocre stint. We had slight handling problems. I hope this will better in the second stint what would help us to up the ante.”
#31 – Porsche 911 GT3R (Siedler,Seefried,Laser,Jaminet)|Marco Seefried
16:37hrs “That was tough. I could control the field behind me but lost contact to the front-runners. At the start I had a slight contact with another car but this wasn’t deliberately.”
#35 – Renault RS01 (Schmidtmann,Hammel,Wittmer)
17:24hrs Kuno Wittmer: “It’s difficult for us as the tarmac is so hot. Let’s see what we can do, At least, we already worked our way up from 25th to 20th position.”
#48 – Mercedes-AMG GT3 (Hohenadel,Dontje,Götz,van der Zande)
16:59hrs Renger van der Zande hits the tyre walls while accelerating out of the Mercedes-Arena but can continue. Drives across the GP circuit to the pit lane and is pushed into the garage.
#99 – BMW M6 GT3 (Sims,Krohn,De Phillippi,Tomczyk)
18:01hrs jack-knifes at the entrance of the Adenauer Forst. De Philippi is able to get the car under control – just – and avoid an accident.
18.03hrs Rolls at the Breidscheid on the emergency road. A front-end collision arguably resulted in a damaged radiator. The team will try to get the car back to the pit lane.
#911 – Porsche 911 GT3 R (Estre,Dumas,Vanthoor,Bamber)
16:32hrs Kevin Estre pits from the lead. Earl Bamber gets behind the wheel.
17:49hrs Earl Bamber: “I had a lot of traffic during my stint but it wasn’t too bad, in the end. Everybody is driving their own race, here, so you also have to take your time and be considerate. The car is running good, Manthey have done a great job.”