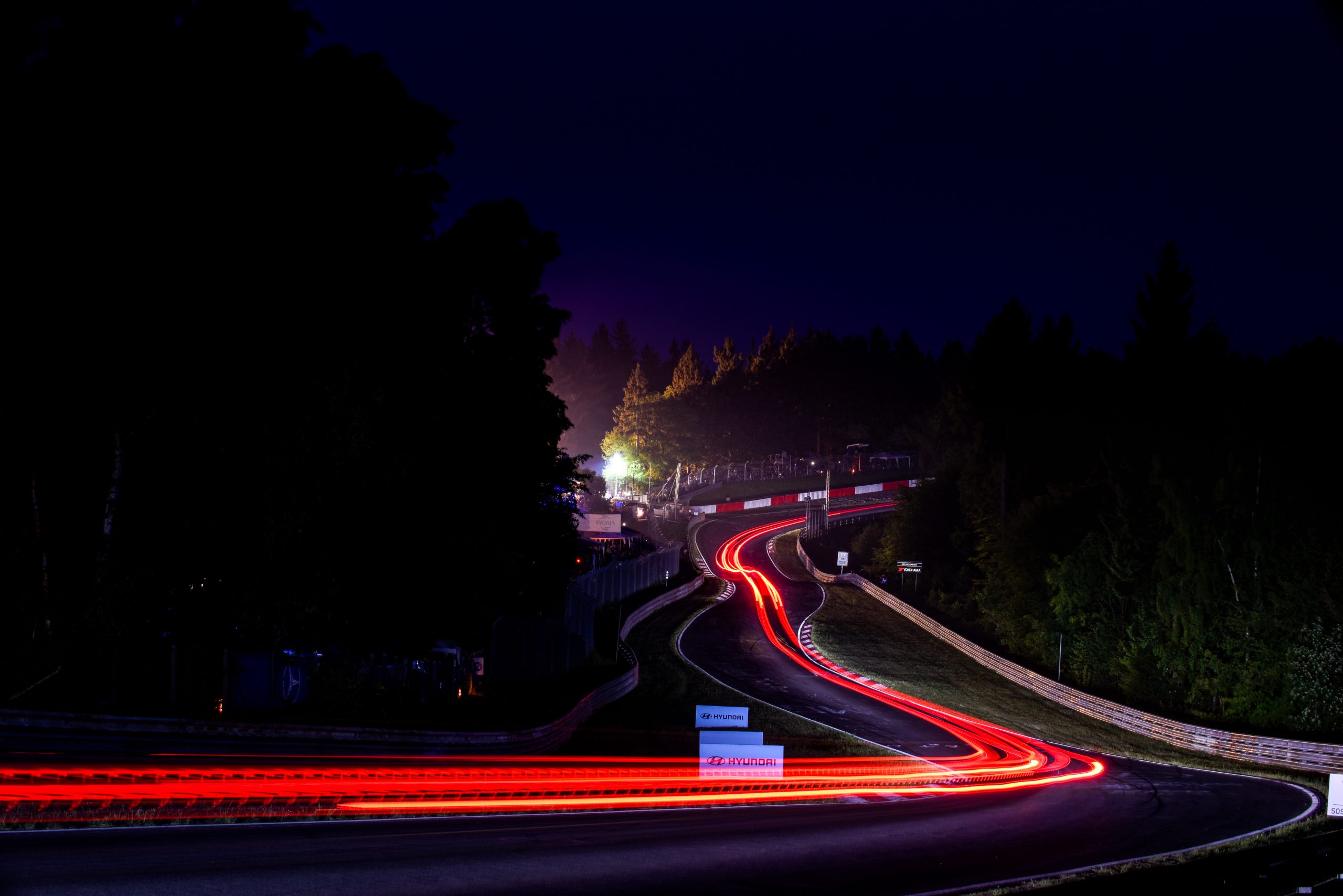 The 11th hour of the race proved to be disastrous for the long-term leaders, the Manthey Porsche #911. An accident forced the car into retirement and the deck for the battle for the lead was re-shuffled. In the following hours, the second Manthey Porsche, car #912, and the Black Falcon Mercedes-AMG GT3 #4 alternated as race leaders several times, with the Audi Sport Team Land Audi R8 LMS #1 working its way up consistently. In the morning hours, the Audi holds fourth position, behind the Aston Martin V8 Vantage GT3 #7.
#1 – Audi R8 LMS (Mies,van der Linde,van der Linde,Rast)
02:55hrs Rene Rast pits again. This means that he pitted three times during the course of five laps.
07:17hrs Christopher Mies: “The conditions range from abysmally wet to still wet. I have to admit that I was wrong when I claimed that one manufacturer was classified too well. The difference arguably was caused by the suspension setup as no BoP can work in wet conditions.”
#2 – Porsche 911 GT3 R (Jans,Böckmann,Slooten,Luhr)
07:14hrs Steve Jans for Marek Böckmann. Böckmann: “I had to work hard to keep the car on the road. You mustn’t make any mistakes. In addition, we had some tyre problems. But altogether it ran not too bad for the conditions.”
#4 – Mercedes-AMG GT3 (Engel,Christodoulou,Metzger,Müller)
03:07hrs Manuel Metzger passes Richard Lietz in the Porsche #912 at Wehrseifen for the lead. The 15th time the lead was stolen – in 76 laps.
07:25hrs Der Black Falcon Mercedes completes lap 100 with eight more hours to go.
08:06hrs Adam Christodoulou: “The race is running rather well for us although the conditions are really difficult. The track changes lap by lap and so, adapting is difficult. It’s mad out there. But we are in a good position, it depends on the pit stops who is holding the lead.”
#7 – Aston Martin Vantage GT3 (Martin,Sorenson,Thiim,Turner)
02:46hrs On the previous lap – including pit stop for wets – Nicki Thiim crossed the line in 11:11 minutes. The two leaders, #912 and #4, needed 11:09 minutes each – on slicks and without pit stop.
05:35hrs Maxime Martin once again confirms his reputation as wet-race expert. With his 10:01.072-minute lap, the Belgian is 20 seconds faster than the race leaders.
#11 – Mercedes-AMG GT3 (Assenheimer,Schmid,Bleekemolen,Marciello)
01:07hrs the car that broke down at the Kesselchen continues.
#31 – Porsche 911 GT3R (Siedler,Seefried,Laser,Jaminet)
02:12hrs M. Jaminet reports that the 911 GT3 R hasn’t got propulsion any more. The car currently is standing at Aremberg
#911 – Porsche 911 GT3 R (Estre,Dumas,Vanthoor,Bamber)
01:36hrs the previous race leader is standing in the Schwalbenschwanz area after having crashed into the crash barrier. Romain Dumas lost it while lapping a slower car and crashed without external influence.
#912 – Porsche 911 GT3 R (Lietz,Pilet,Makowiecki,Tandy)
06:56hrs Collision with the Renault Megane #165 in the Hatzenbach area. After having spun, Nick Tandy can continue. The incident should have cost him some 30 seconds.