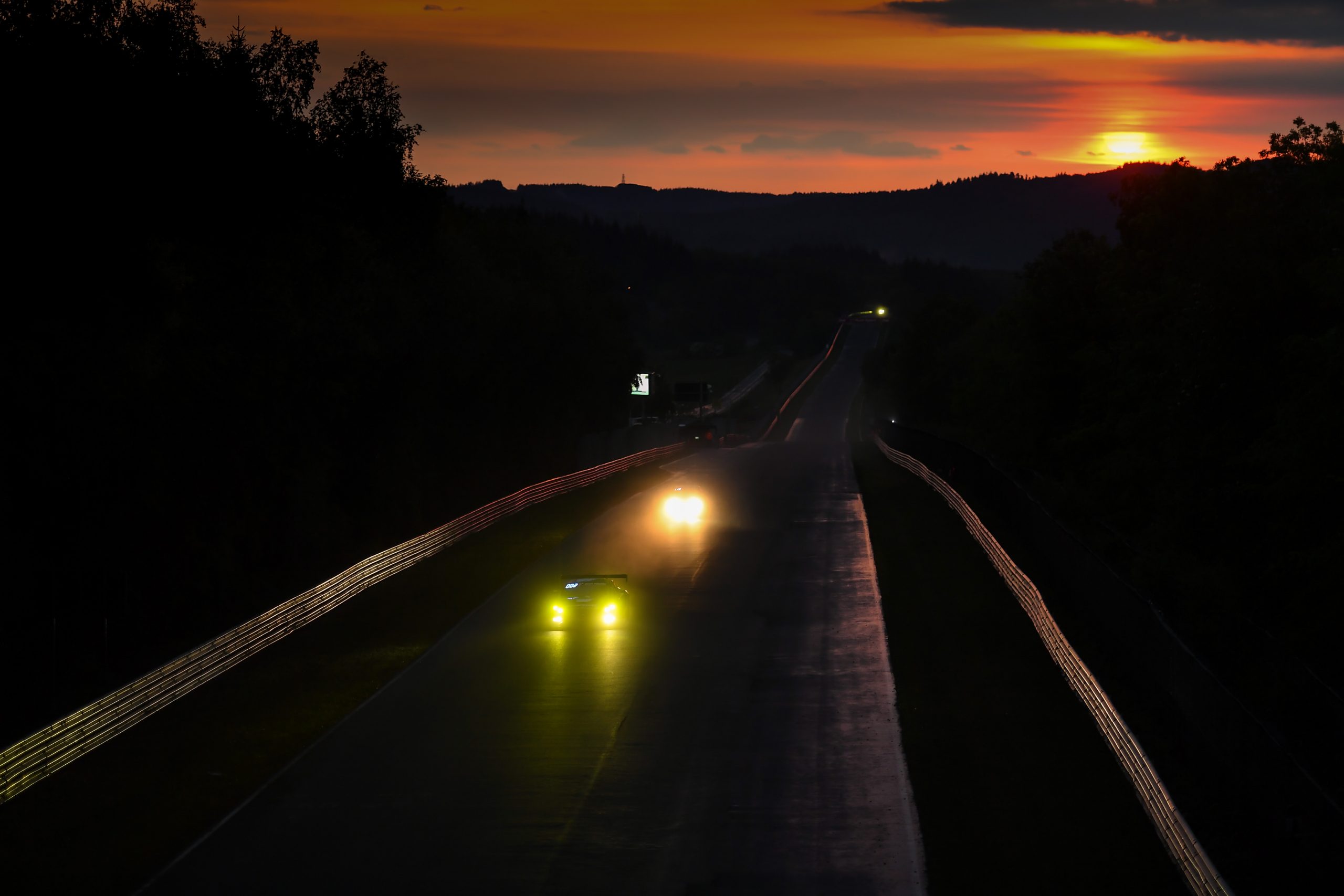 Black Falcon’s Mercedes-AMG GT3 #4 takes the lead while Manthey’s #912 receives a time penalty for a Code-60 offense. Also drama at Audi Sport Team Land: Kelvin van der Linde loses the #1 in third position – resulting in a repair break. The car rejoins the race in eighth place. The Aston Martin V8 Vantage GT3 #7 that also still races on the same lap as the leader, keeps on delivering in flawless style. In addition to their race leader, #4, Black Falcon now have succeeded in also bringing their Mercedes-AMG GT3 vehicles #5 and #6 to the top flight. While Audi’s spearhead now is the Audi Sport Team Phoenix R8 LMS #3 in sixth position.
#1 – Audi R8 LMS (Mies,van der Linde,van der Linde,Rast)
08:3hrs Pit stop of the still reigning champions. Kelvin van der Linde who stays behind the wheel after having worked his way up to third.
09:43hrs Kelvin van der Linde spins into the crash barriers while approaching the Hohe Acht. As the grass is wet he can’t get back from the grass strip. Team Principal Wolfgang Land on the crash of Kelvin van der Linde: “We don’t know if the wheels still are standing straight. Things like that happen if you have to take risks. We were racing on slicks.” Van der Linde cruises back to the pits. The left side of the car is massively damaged, the left rear wheel is standing aslant.
10:06hrs René Rast rejoins the race for the reigning champions.
#30 – Porsche 911 GT3R (Arnold,Müller,Henzler,Campbell)
08:56hrs Team Principal Klaus Abbelen: “We had hoped for more. But I’m quite happy with the current race situation of our #30. We had a few tyre problems as we didn’t always opt for the perfect tyre compound.”
#48 – Mercedes-AMG GT3 (Hohenadel,Dontje,Götz,van der Zande)
09:54hrs Maximilian Götz: “I think my stint was not too bad. I love these conditions. I was racing on slicks and that was mega. The perfect choice. In the past 2.5 hours we did a really great job.” Indy Dontje gets into the cockpit.
#33 – BMW M6 GT3 (Dumbreck,Dusseldorp,Imperatori,Klingmann)
09:12hrs 89-second time penalty for falling below the pit-stop minimum time.
#912 – Porsche 911 GT3 R (Lietz,Pilet,Makowiecki,Tandy)
08:46hrs Once again on a watch due to a potential Code-60 offense.
10:15hrs At 04:17hrs, #912was clearly too fast (82.6kph) in a Code-60 zone at post 70 (Hatzenbach). The 3:32-minute time penalty will have to be taken during the next pit stop. As the car is the current race leader, the incident was investigated particularly extensively – but the GPS data, vehicle data and video footage all confirmed the offense.