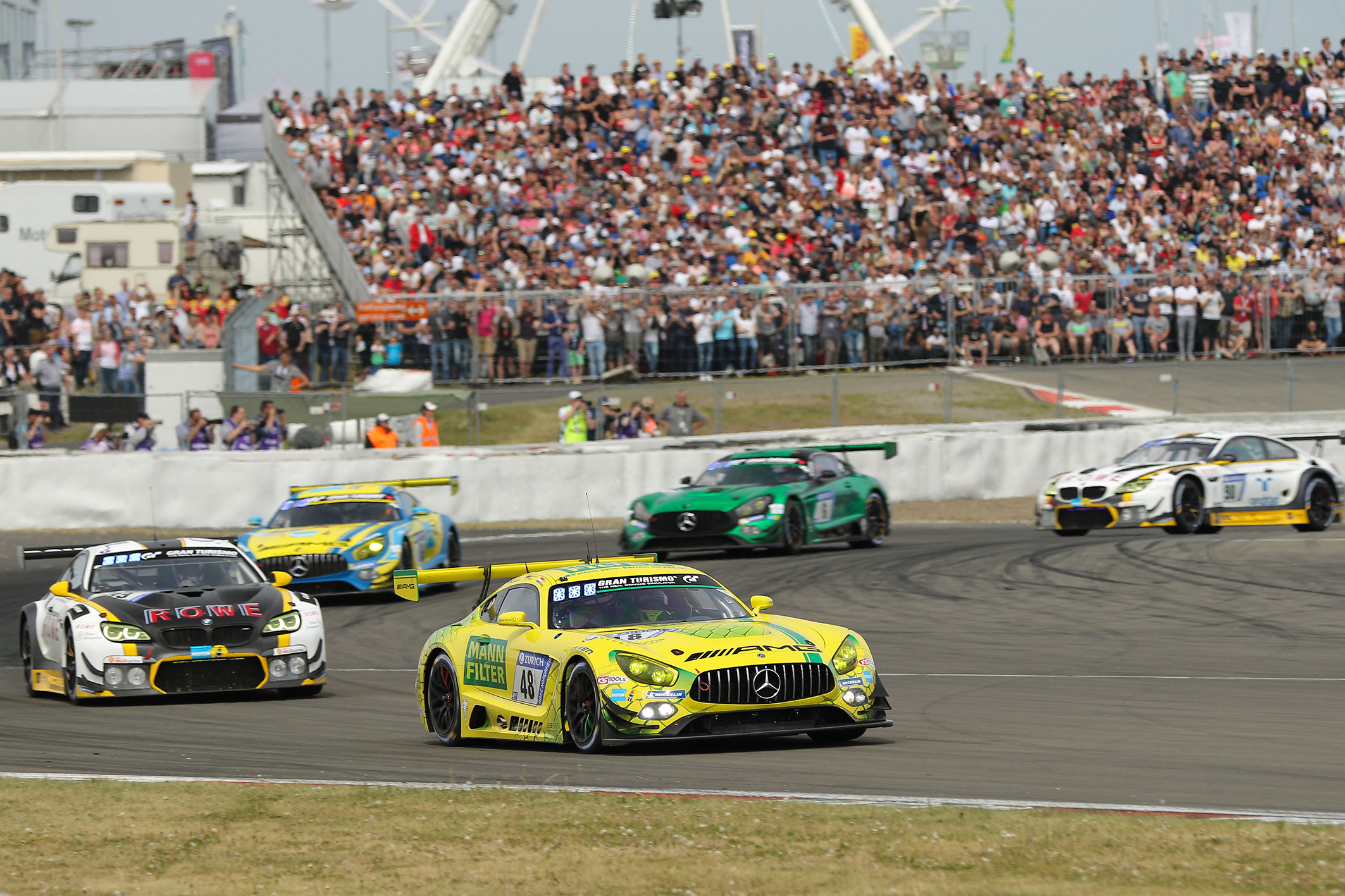 Just 100 days to go to the race of the year at the Nordschleife: from 20th to 23rd June, the legendary Nordschleife once again will stage the biggest motor-racing event in Germany. More than 200,000 motor-sport enthusiasts will travel to the longest and most spectacular racetrack in the world to witness the 160-car grid battle it out for 24 hours for one of the most coveted trophies in international motor racing. In addition, the programme also comprises the FIA World Touring Car Cup that once again will contest three sprint races on the 24h-Race weekend. Numerous other highlights, on and aloof from the track, turn the ADAC TOTAL 24h into the highlight for fans, drivers, teams and officials. The advance booking for the Nürburgring 24h Race tickets already has begun. Those who want to secure their tickets now can do so in the eventimsports.de online shop and via the Nürburgring website. Furthermore, you can order the tickets by phone at the hotline, +49 (0)1806 991185 (€0.20 per call from the German landline, maximum €0.60 per call from the German mobile networks).
Exciting cars on the grid
Good omens for the 2019 ADAC TOTAL 24h Race. Numerous teams already announced to contest the race or even registered for the prestigious event. This year, the front-runners will be chasing the Manthey-Racing Porsche 911 GT3 R that won last year the 46th edition by prevailing in a spectacular showdown. Due to this success, the team that is based in the immediate vicinity of the Nürburgring now is the sole record holder with six overall wins under its belt. But there are quite a number of teams that also want to make it to the hall of fame, this year. Several BMW and Porsche teams already announced to contest the race in the GT3 category that usually features the favourites. And it’s only a question of time until a number of other brands will disclose their line-up for 2019. So, it may be expected that the Audi and Mercedes-AMG vehicles also will be factors in the battle for the win. Furthermore, the Scuderia Cameron Glickenhaus also announced to once again be on the 24h Race gird. In 2017, the independent squad from the USA outperformed all the favourites by securing the pole. And the Americans are determined to once again be one of the front-runners, with their spectacular SCG 003. Several other independent teams already announced their programme for the 2019 season. Bonk Motorsport, Muehlner Motorsport, Ring Racing and others once again will make for action in the ‘smaller’ classes. The first pole of the year, however, was secured by the team around skateboard legend Titus Dittmann: the team registered its bilious green Dodge Viper as the very first competitors for the 2019 24h Race – as early as in December 2018.
Regulations with slight qualifying-mode changes
In the off-season, the 24h Race organisers honed the regulations and focused on the qualifying mode while doing so. Made possible by a time-keeping revolution at ‘The Ring’, the organisers now use ‘virtual lap times’ for evaluating the competitiveness of the individual vehicles: For the front-runners, racing in the GT3 and SP-X categories, the achieved split times are used for determining and comparing theoretical lap times. Then, 80 percent of the professional teams and 80 percent of the best amateur teams will qualify for the individual time trials. The advantage of the new mode: top amateur teams also have got the chance of battling it out for the 24h Race pole in the individual time trials. In addition, the new modus operandi is supposed to prevent the teams from hiding their real competitiveness by deliberately driving slowly to manipulate the ‘Balance of Performance’ in their favour. The lap times will be determined in the Nordschleife races prior to the 24h Race – the VLN rounds as well as the final preparation race that will be contested, as it was the case in the previous years, within the framework of the 24h Race ADAC Qualifying Race. This prologue that will be held on 18th and 19th May represents the perfect preparation for the 24h Race as it features numerous elements from the individual time trials to the six-hour feature race.
Programme complete: Full-speed show at The Ring!
Apart from the new name sponsor, TOTAL, the 2019 edition features further new main sponsors – and all the new partners have got high motor-racing affinity. Just in time for the 100-day countdown, the number of sponsors comes close to being completed and so, an important component of the race is all wrapped up. Inter alia thanks to this support by the partners, the organisers are able to provide a unique programme at constant ticket prices. In addition to the FIA World Touring Car Cup (FIA WTCR) that once again will contest three races at the Nordschleife, on the 24h race weekend, the visitors may look forward to even more top-class racing: on Friday, the three-hour ADAC 24h Classics contested on the combination of Nordschleife and GP circuit, the 24h Race Top Qualifying and the first FIA WTCR race will be the highlights. Furthermore, the Audi Sport Seyffarth R8 LMS Cup will race at the GP circuit. Meanwhile, the RCN performance test will represent the traditional start into the 24h Race weekend. And there also is a lot going on aloof from the track. The impressive Ravenol Ferris wheel once again will be the paddock eye-catcher. Here, the visitors can make an impressive panorama ride throughout the weekend. The ‘Fan Mile’ at the ring°boulevard and the ‘Fan-Arena’ in the historic paddock also are planned to again become popular attractions for the visitors. And on Friday evening it’s time to party: the open pit lane invites the motor-racing enthusiasts to a pit walk and simultaneously, the Falken Drift Show will thrill the fans in the Müllenbachschleife.