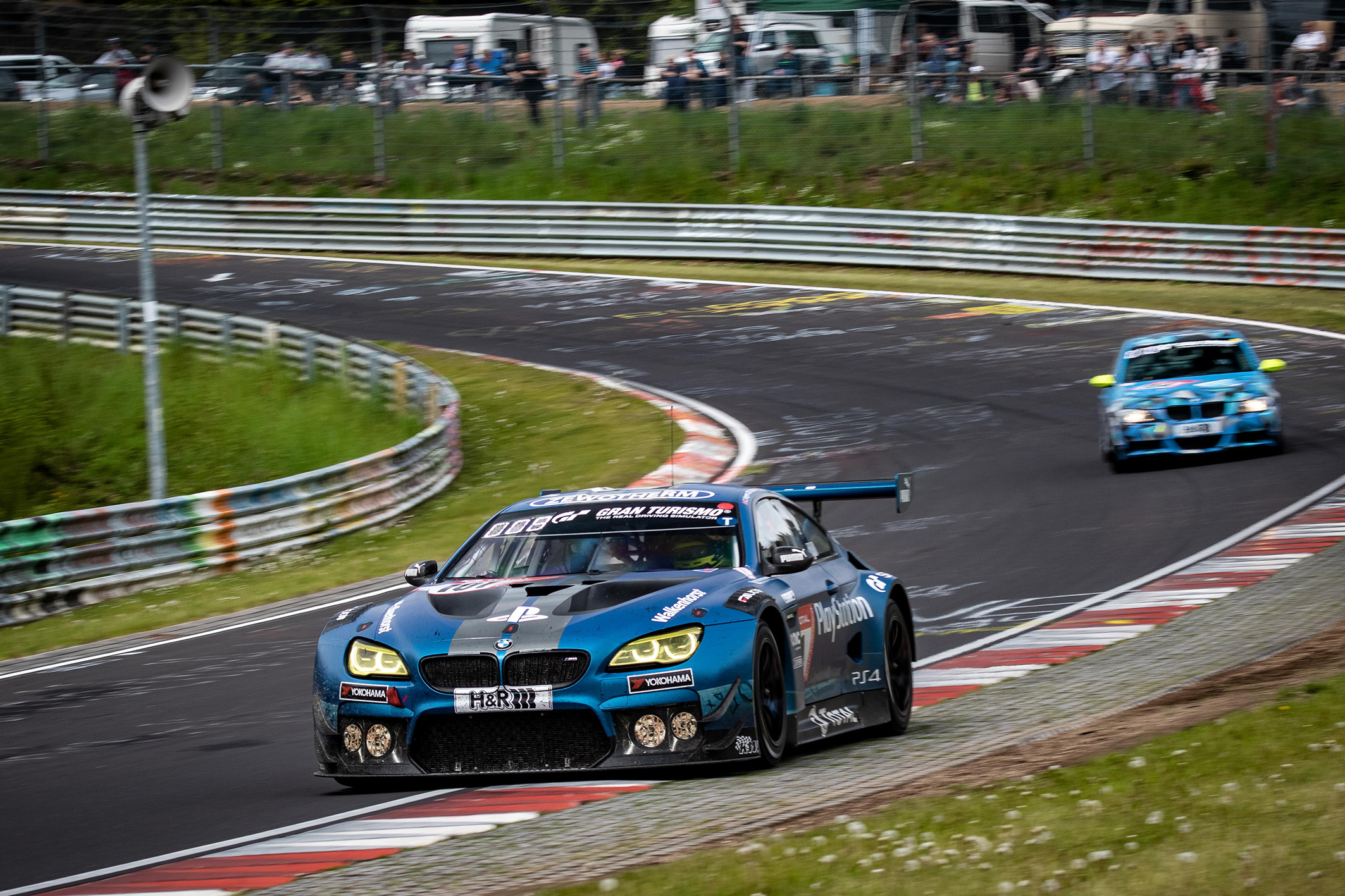 Convincing appearance of the BMWs M6 GT3 in the ADAC Qualifying Race at the Nordschleife. In the final test race for the 24h Race held on the Corpus Christi weekend (20th to 23rd June), all the podiums were secured by the Bavarian manufacturer. While the Walkenhorst Motorsport crew – Christian Krognes (NOR), David Pittard and Nicholas Yelloly (both UK) – clinched the overall win ROWE Racing finished second (Jesse Krohn / FIN and John Edwards / USA) and third (Connor de Philippi / USA, Tom Blomqvist / UK and Mikkel Jensen (DK) respectively. While the best Porsche – a 911 GT3 R representing Frikadelli Racing – finished fourth, the best Mercedes came fifth – and the best Audi had to settle for finishing eighth.
>> Result 24h qualification race (PDF)
Thrilling early stage
The starting phase of the six-hour 24h Qualifying Race proved to be a true thriller, with the typical Nordschleife conditions adding to the battle at the front end of the field.
Many teams seemed to have opted for the wrong tyres for the wet track and started into the race on slicks. What offered Marcel Fässler in the Audi R8 LMS #4 the opportunity to shine on his wets, thus clearly outpacing pole sitter Yelmer Buurman in the Black-Falcon-Mercedes-AMG #6 and the rest of the field. But his domination didn’t last long. On lap four he had to come in for slicks as the competitiveness of his wets dropped on the drying track. After three hours, the BMWs M6 GT3 of ROWE Racing, Schnitzer and Walkenhorst as well as the two Porsches 911 GT3 R of last year’s winners Manthey Racing proved to be particularly competitive.
BMW dominates at the latest from race half-time
In the second half of the race, the BMW squads delivered in amazing style. The BMWs temporarily were eight second faster than the Porsches 911 GT3 R behind them and only a 1:32-minute time penalty for having ignored yellow flags made the BMW strategists frown. But at the end of the day, all the podiums were clinched by BMW. Record winners Manthey Racing seemed to be on the way to making it to the podium but with just a few more minutes to go they had to pit with steering-system problems – and the one-two-three for BMW was wrapped up.
Norwegian Christian Krognes described the success as follows: “This was one of my most intense moments in 2019. Closing in more and more on your rival represents a massive boost. I quickly realised that we had better grip in the slow sections. Therefore I knew that I should overtake him at the GP circuit. It has been the first win for the team in many years.”
Race Director Walter Hornung also came to a positive conclusion regarding the weekend. “We witnessed great race action that makes you look forward to the 24h Race. The teams had to cope with wet and dry weather in the practice sessions and the race, representing variegated testing conditions. We provided an optimum final test for the 24h Race – and the fans had fun due to the thrilling race action. And that’s exactly what it is about, in this event.”