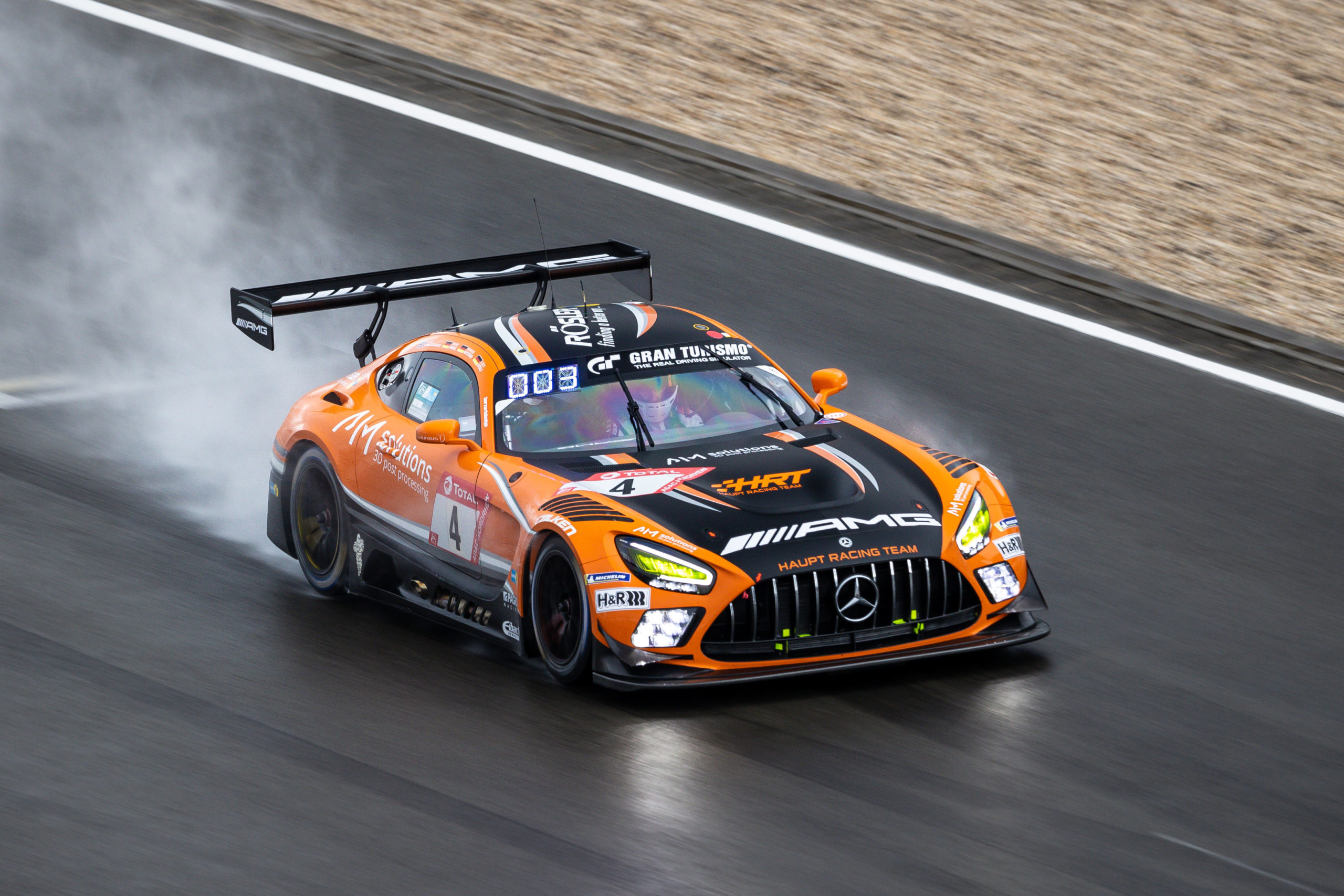 On Friday, the former DTM driver Maro Engel secured the 24h-Race pole just like last year – with an impressive lap time of 8:57.884 minutes. In the Top Qualifying 2 session for the 48th ADAC TOTAL 24h Race, Engel and his HRT-Mercedes-AMG #4 were the only ones who succeeded in breaking the nine-minute barrier on the wet 25.738-likometre combination of Nürburgring Nordschleife and GP circuit, thus being 4.930 seconds faster than Luca Ludwig with his Octane-126-Ferrar #26 that crossed the line in 9:02,814 minutes.

With his third pole, following the ones he clinched in 2016 and last year, Engel also secured the Glickenhaus Trophy – he will be awarded with 45 minutes prior to the start of the race – for the fastest driver at ‘The Ring’. At 15:30 he will lead the 97-car field into the Eifel Marathon.

The race will be covered live and completely by the German TV station NITRO. Furthermore, the fans also can follow the full action at the website www.24h-rennen.de by dint of live stream, live ticker and live timing. And those who want to witness the race action live on site can do so at the GP-circuit grandstands. Tickets can be purchased at short notice at the Nürburgring website www.nuerburgring.de/24h.

“I’m happy,” beamed Engel. “The conditions out there were tough, with wet and with dry sections. So, you have a rather high pulse when selecting the tyre for your fast laps. But I can say to my team: the choice was perfect,” added Engel who also had been the fastest in Top Qualifying 1 that was held for the first time, thus qualifying his team for TQ 2. “When I was already out, the team informed me via radio that the Ferrari was really fast and that I had to give my very best. So I went for it, went flat out in the Tiergarten area, hoped that everything would fit perfectly – and it did.”

The aforementioned Ferrari was raced by Luca Ludwig. “In my second row I had fantastic grip and could push to the max, made no mistakes and the lap was clean and fast,” said Ludwig who contested his qualifying laps on intermediates. He came close to adding a second Ferrari pole to the one the Italian brand clinched in 2001. So, it’s the third time that a Mercedes-AMG will start from the pole into the 24h Race – and all the three times thanks to Engel. Raffaele Marciello in the Getspeed-Mercedes-AMG #9 and Dani Juncadella the 10Q-Racing-Mercedes-AMG #22 took another two vehicles representing the Stuttgart based brand to the second row on the grid. Altogether, five Mercedes’ AMG and four BMWs made it to the top 10, with Nick Yellolv in the ROWE-BMW #99 being the fastest in fifth position.

Prior to the final battle for the pole, 17 cars contested the Top Qualifying 1 that was held for the very first time offered the drivers the opportunity to secure one of four positions still available for TQ 2. In extremely changeable weather conditions, Engel and Juncadella were joined by Dennis Olsen in the KCMG-Porsche#18 and Frank Stippler in the Phoenix-Audi #5. In the Top Qualifying 2, however, Olsen was stopped on his information lap and so, Alex Müller in the Frikadelli-Porsche #30 was the best-placed Porsche driver and Mirko Bortolotti with the #3 secured the best Audi grid position.

In the first Nürburgring round of the FIA WTCR Cup, Argentina’s Esteban Guerrieri gave his German All-inkl.com-Team Münnich Motorsport a home win. With a courageous overtaking move in the Aremberg corner, the Honda driver stole the lead of pole sitter Yvan Muller in his Lynk & Co. to then defend his lead until the race was over. “It was a risky move but with an opponent who is experienced as Muller daring it was possible,” said Guerrieri. Behind Muller, his fellow Lynk&Co driver – championship leader Yann Ehrlacher, finished third, followed by Thed Björk.