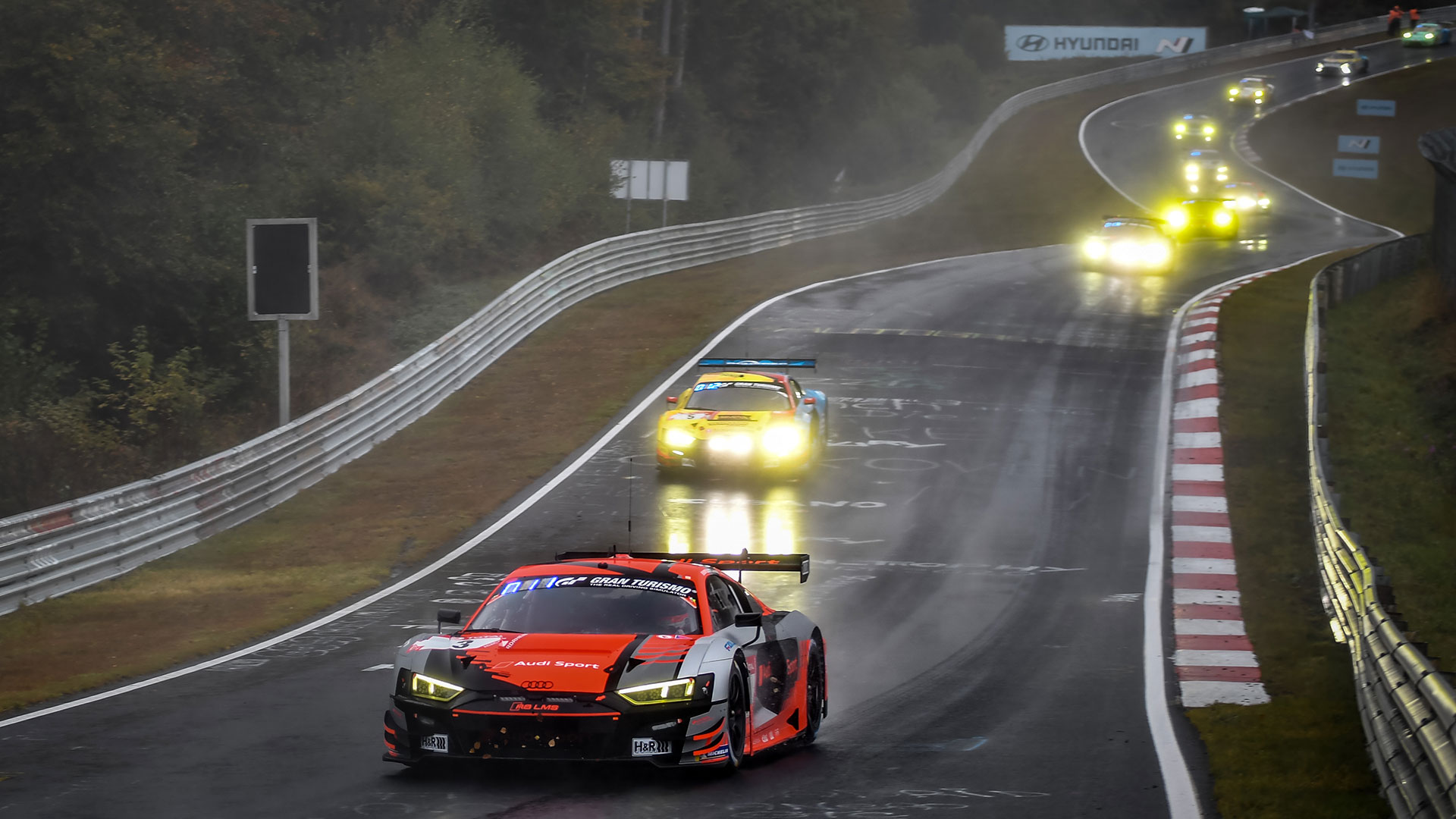 The weather remains the crucial factor: Whenever the racing lines begins to dry, the next slight rain shower begins to fall. The Audi R8 LMS GT3 #3 defends the lead, with Christopher Haase having completed a double stint and losing some seconds of his lead due to an off-track moment. Second and third positions, however, now are held by two BMWs M6 GT3 representing the Schnitzer Motorsport (#42) and ROWE Racing (#99) colours. The fastest Mercedes-AMG and Porsche follow in fourth (#22) and sixth positions (#18) respectively. With 17th position, the Scuderia Cameron Glickenhaus has established as top-20 contender and is back as fastest non SP9 vehicle.

08:58hrs: Maro Engel pits due to a slow puncture

09:07hrs: There was a problem during the previous pit stop and Maro Engel returned from the GP circuit to the pits right away. At the pit-lane exit he lost the wheel that kept on rolling until it stopped on the home straight. There it could be recovered by a track-safety vehicle.

09:04hrs: The catch-up chase of #18 chase is stopped by an off-track moment at the ‘Flugplatz’. The Norwegian can continue.

09:30hrs: At the beginning of his pit stop, Rene Rast serves his 32-second penalty.  Christopher Mies takes over. Rene Rast on the time penalty and his stint: “In a racing car, standing for 30 seconds feels like five minutes. My stint was okay. The track still was slightly wet. I pitted from second place, the position I also started in. Christopher Haase had a good pace but in the closing stages I was able to match it. We lost 30 seconds due to the penalty but I’m convinced that we will be able to make up for the lost ground. I think it will be possible to switch to slicks in one or two hours.”

Dirk Werner: “The yellow safety-car lights still were on for a long time and I just wasn’t aware of the fact that the race would be on. Afterwards everything ran well although I was skidding around quite a lot – I lacked grip. Altogether a difficult stint. The conditions at the Nordschleife are quite okay, it was the right decision to restart the race. If there won’t be another rain shower, the track will be dry soon.”