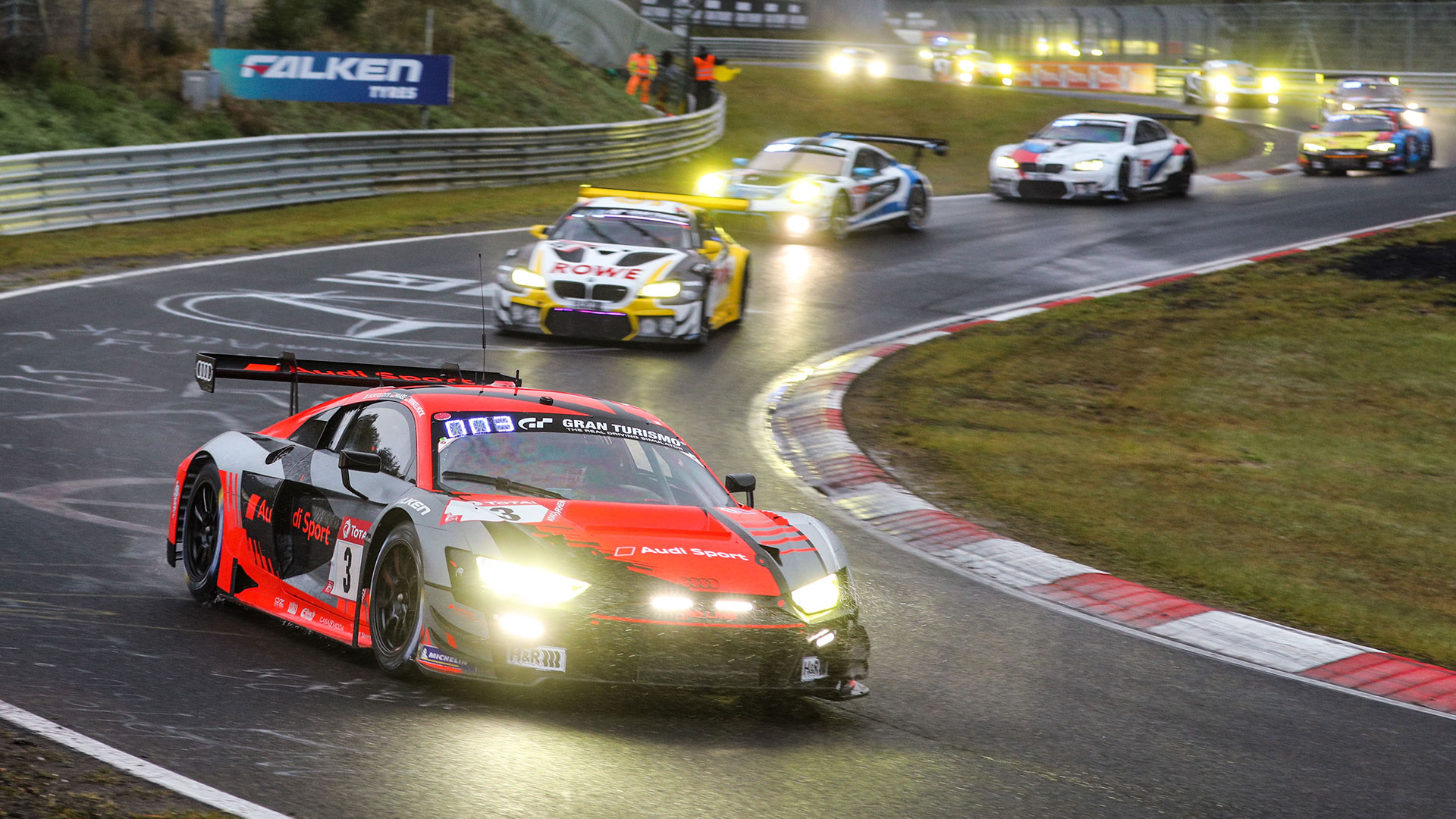 Audi vs. BMW seems to be the battle for the win in the 48th ADAC TOTAL 24 race at the Nürburgring. In the past two hours, the Audi R8 LMS GT3 #3 holds the lead irrespective of the pit stops. But the two ROWE Racing BMW M6 GT3, particularly the #99, are pressurising the Audi more and more. Meanwhile, the Audi R8 LMS GT3 #1 and the Schnitzer Motorsport BMW M6 GT3 #42 lost time due to time penalties for pit-lane infringements. Porsche’s spearhead is the Frikadelli 911 GT3 R#31 in fourth position. The track keeps on drying, everybody switched to slicks and Luca Ludwig  in at the wheel of his Ferrari 488 GT3 #26 is the first driver to cross the line in less than nine minutes.

11:31hrs: In an intense investigation at the pit-lane exit the Racer Control detects a pit-lane infringement and awards the reigning champions receive a 32-second penalty.

11:34hrs: Nico Müller stays in the car. “The conditions currently aren’t easy for the drivers. The track changes from minute to minute and therefore, it’s good that Nico continues. He knows what’s happening out there.”

Christopher Haase: “My double stint was difficult and dangerous. You have to take a lot of risks if you want to go fast. I had a moment at the Aremberg section but apart from that I did quite well.  Nonetheless, the moment demonstrated that we are racing at the razor’s edge. We hope that we opted for the best possible tyres, now. Since the restart, the marathon  virtually turned into a sprint.”

Maxi Buhk is replaced by Fabian Schiller and says: “It was somewhat boring as our gap to the leaders amounts to two laps. We are trying several things but altogether it’s rather uneventful. After the repairs the car is running flawlessly again, the guys did a great job.”

Jan-Erik Slooten takes over from Pierre Kaffer who says: “Everything was okay although the track conditions are somewhat difficult. We were racing on wets and the air pressure in the second set unfortunately was too high. Then I took the risk to switch to intermediates and it slightly paid off. I’s not really our race. Now we switched back to wets.”

Christopher Mies: “”We opted for experimenting with the tyres – a bit. But that unfortunately didn’t pay off as drizzle began to fall. Therefore, the track is too slippery but it could have worked, otherwise. The tyre doesn’t displace water and it’s like driving on ice. Not funny. We lost  lot of ground due to the penalty and had to take a risk. It could have worked but it didn’t.”

Maxime Martin: “The car ran fine up to the first pit stop. But then something went wrong – with the tyres or the tyre pressures. That cost us some time. But there still is a long time to go and anything can happen”

Sheldon van der Linde: “The stint ran really well. At the restart the battle with the Audis was somewhat tough as they were very fast. But my second stint was clearly better, and driving the car felt just great. Anyway, the conditions out there still are difficult. There is a dry line but leaving it is dangerous. Making a mistake is easy.”

Martin Tomczyk after having completed his stint: “I had expected to do better. But our tyre pressure arguably was slightly too high. The first two laps were really great but the grip decreased and I was far too slow. The track is dry and we went out on slicks, now.”

Sven Müller: “It’s really difficult to make the decision between wets and slicks. At the latest at overtaking manoeuvres you have to have the dry line and then, things get slippery.”