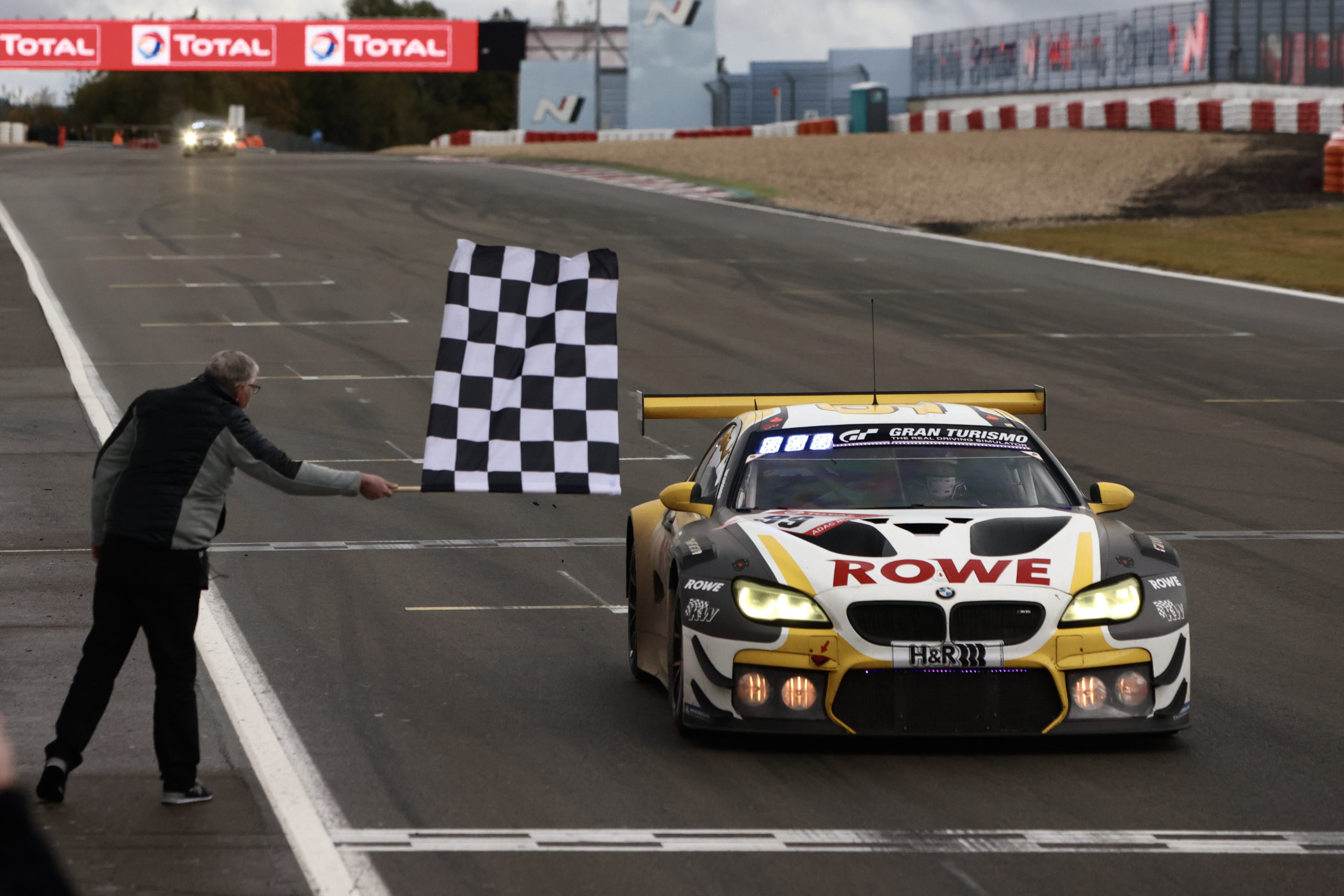 In the 48th ADAC TOTAL 24h race Rowe Racing gave BMW the 20th overall win. 50 years after the success in the debut edition, the Munich based manufacturer in an extremely close battle, thus making an end to a 10-year dry spell in the ‘Eifel Marathon’. With an impressive performance on Sunday morning, following a 9.5-hour rain break in the night, the drivers took the ROWE-BMW #99 to the perfect position and on the occasion of another rain shower, they made a great decision.

“What a fantastic anniversary success 50 years after our overall win in the debut edition of the Nürburgring 24h Race,” said BMW Motorsport Director Jens Marquardt.. “With the 20th win things have come full circle. Congratulations to the entire ROWE Racing squad and the drivers, Nick Catsburg, Alexander Sims and Nick Yelloly. We already made many efforts with the BMW M6 GT3 to win this tradition-rich ace that is extremely important for BMW Motorsport. Now we made it and the delight is huge.”

Thanks to a fast switch to wets, Nick Catsburg passed the two leading Audis to secure the first win of the German team. The previously leading Audi #3 pitted an lap later and consequently dropped back to second. Despite an impressive catch-up race Christopher Haase didn’t make it as the Audi rejoined the race after its final pit stop some 18 seconds behind the BMW that made its final stop a lap earlier.

“Just incredible,” beamed Nick Catsburg. “This is my favourite race by far and it took me so long to win it. But now I finally made it. All of us, team and drivers, didn’t make any mistakes. And now let’s party!” In 2017, Catsburg already came close to winning the race with ROWE Racing but in the end, they had to settle for finishing second. This time, however, the Dutchman and the two Britons Alexander Sims and Nick Yelloly crossed the line after 85 laps and 2,157.13 kilometres with a 15.4-second lead. “When it came to the strategy, the weather spiked our guns,” said Audi’s Haase. There was rain in the Brünnchen area but we believed that we could continue on the slicks. But the rain wandered and that arguably cost us the win. But I also am happy with having finished second. Behind him and his team-mates Mirko Bortolotti and Markus Winkelhock, the Schnitzer-line-up Augusto Farfus, Jens Klingmann, Martin Tomczyk and Sheldon van der Linde took the #42 to third place.

Up to 8,500 spectators followed the race action from the GP-circuit’s grandstands – with the Corona caused distance. They witnessed a memorable race with many spectacular moments and – inter alia – the seventh weather caused red-flag situation in the history of the race. From 22:32 CEST on Saturday evening to 08:00hrs on Sunday morning, the only action was the torrential rain. The Eifel’s freak weather already temporarily stopped the races in 1992, 1994, 2007, 2013, 2016 und 2018.

Prior to the red flags, continuous rain, sometimes really heavy, sometimes less, as well as extremely difficult track and visibility conditions made for a lot of weird situations, beginning as early as on lap one. The Octane-126-Ferrari #26 with Jonathan Hirschi at the wheel took the lead during the sprint to turn one but after the field had turned off to the Nordschleife it quickly dropped back to 26th. Raffaele Marciello in the Getspeed-Mercedes-AMG #9 and pole-sitter Maro Engel in the HRT-Mercedes-AMG #4 were the first to pass the Ferrari to afterwards hold the lead for a long time.

Another man of the first hour was Marco Mapelli in the Konrad-Lamborghini #21 Franck Perera that leaped up from 23rd to third position. While his team-mate should be the first of the front runners to be stopped by a massive engine failure. Later in the evening, the two leading Mercedes vehicles were stopped by the more and more slippery track conditions. At first, #4 crashed in the hands of Manuel Metzger to retire from the lead and then, Marciello and the new leader, #9, also hit the crash barriers.

So, all of a sudden three Audis held the positions at the front end of the field – until Race Director Walter Hornung pressed the red-flag button. “The conditions worsened more and more, the rain got more and more torrential and the huge amount of water just wouldn’t drain,” he revealed. “So, we had no choice but red-flagging the race. The remaining cars continued the race only on Sunday morning at 08:00hrs CEST behind the safety car. At this point in time, just the first 16 cars were racing on the same lap.