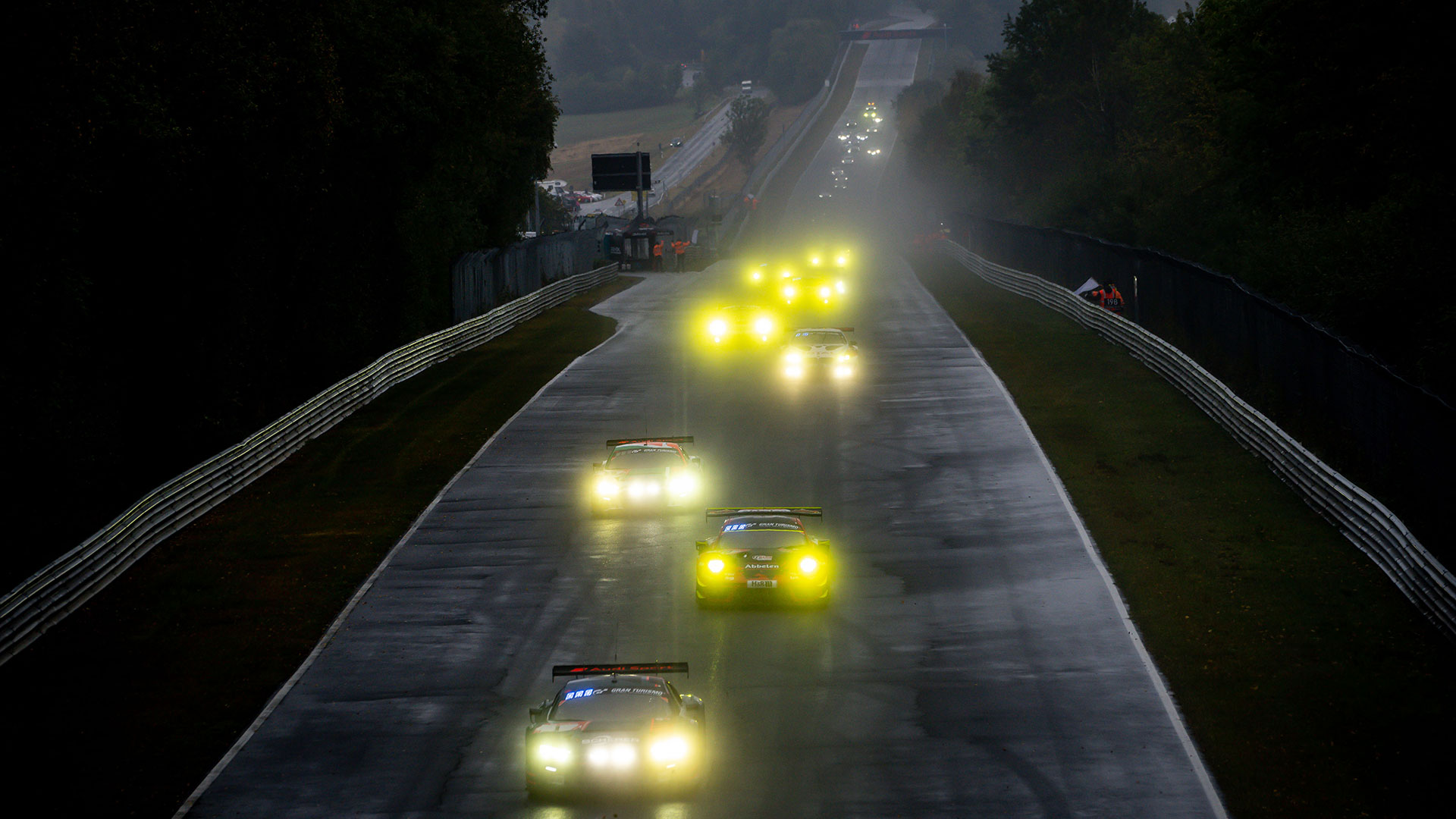 Rain, coldness, darkness: The first seven hours of the 48th ADAC TOTAL 24h Race demanded maximum commitment of teams, drivers – and even more so of the marshals around the circuit. At certain points in time, the track was virtually dry but again and again, crossing belts of rain worsened the conditions massively. And a short time after 22:30hrs CEST, the rain had to be red-flagged. There was just too much water on the track that wouldn’t drain. In these conditions, regular racing was just impossible. It was the seventh weather-caused interruption in the history of the 24h Race. In the years 1992, 1994, 2007 , 2013, 2016 and 2018, the unpredictable Eifel weather also brought fans, organisers and teams compulsory breaks.

After the red flags, Walter Hornung revealed: “In the past 30 minutes, the conditions worsened more and more. There was more rain and, consequently, more water on the track that wouldn’t drain. We had no alternative to red-flagging the race. It goes without saying that we are keeping a close eye on the weather forecasts but to be honest things don’t look exactly promising and I think that we arguably will have to wait until the early morning hours before we can restart the race.” As the stints of all the drivers were regarded as finished with the red flags and the race was stopped for several hours, the team could chose their drivers for the restart.

For the teams, the break meant an unexpected repair period – that was used by many squads. Only after having completed their work, they joined the ones that were forced to wait following a short service.

On Sunday morning at 00:70hrs, the Race Control announced that the race would be restarted at 08:00hrs with a lap behind the safety car.

The cars will be standing in one row on the grid to then start into the lap behind the safety car. At this moment, the race will be regarded as restarted. The time wasn’t stopped and the race will be finished as scheduled at 15:30hrs

Like in a normal safety-car period, the number of laps won’t change but the gaps opened within a lap will be lost. (what means that there won’t be an addition of the two parts of the race). So, the optical order on the race will correlate with the real order.

For safety reasons there will be two starting groups. To make for equal opportunities in the two groups all vehicles of one class will start in the same starting group.  An according starting grid with two classes will be formed.

Helpers and media representatives may enter the starting grid.

22:50hrs Phoenix Team Principal Ernst Moser: “The red flags were a must. Otherwise, more and more cars would have crashed. It’s nothing but luck that none of our cars has been damaged, so far. The decision was absolute correct. As far as we know, the rain will keep on falling for at least two hours.”

For GetSpeed it could have been worse. Thanks to the red flags short after their accident, the squad now has got the opportunity to repair their Mercedes-AMG. The crew is working hard on getting the car ready to race in time for the restart. Team Principal Adam Ossieka: “It won’t come as a surprise that we are extremely disappointed. We set the pace for a long time and held the lead – but this doesn’t count anymore.”

Should the Mercedes really succeed in rejoining the race it will receive a 1:32-minute penalty for having caused the collision with the Porsche #63 Kodidek / Wilwert / van Ramshorst / Cools (Porsche  991 Cup) at the Eschbach around 21.05hrs.