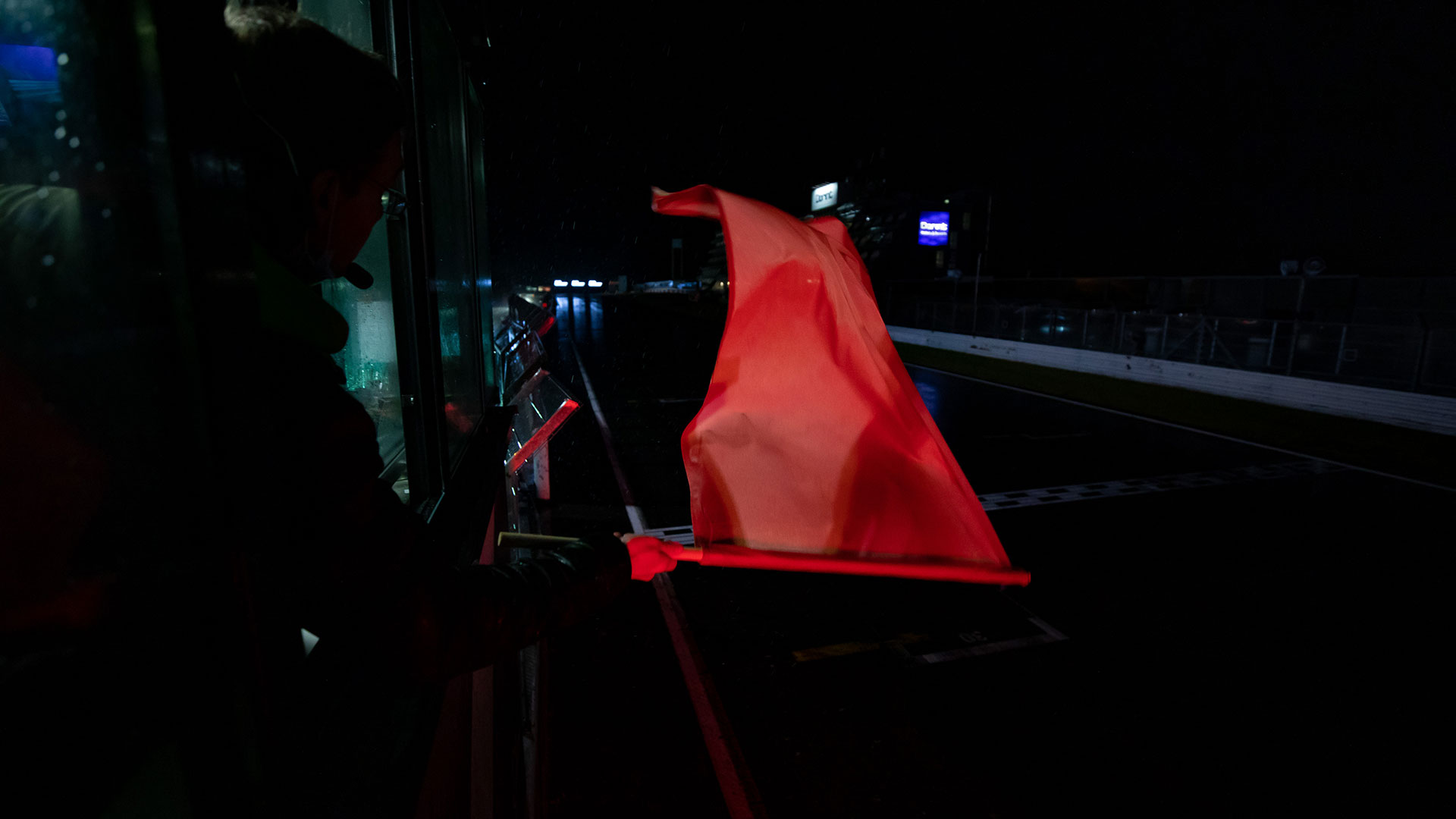 The seventh hour of the race ended with the red flags at 22:33hrs. A decision that was caused by darkness, rain and further dramas.  Too much water that wouldn’t drain off on the track, poor visibility and forecasts of even more rain forced the race control to opt for the red flags. Prior to the decision, several cars spun due to the adverse conditions.  On early Sunday morning, at 00:30hrs, the Race Control will make a decision regarding the continuation of the race. Martin Tomczyk (BMW Team Schnitzer BMW M6 GT3 #42) supports the decision of the race control: “Assessing were you have to cope with aquaplaning and were not was difficult and so I opted for playing it safe. The red flag was the only possible decision.”

As early as in the sixth hour the Mercedes teams had to cope with a further dose of drama. The GetSpeed Mercedes AMG GT3 that held the lead since the accident of the HRT Mercedes skidded of the track and onto the grass at the Adenauer Forst with Rafaele Marciello at the wheel. He continued at first but in the Kallenhardt section he had to retire for good

Afterwards, three Audis R8 LMS GT3 dominated the action. When the race was aborted, Dries Vanthoor held the lead in the #1, followed by Kelvin van der Linde (#29) and Christopher Haase (#3) who also spun – at the Hatzenbach – just three minutes before the red flags. The Audis battled it out with one another and the distance between them added up to just 30 seconds. “Aborting the race definitely was the right decision. Not only the water that didn’t drain made diving virtually impossible but there also was fog that reduced the visibility at certain spots to virtually zero. It’s extremely dangerous. I thank the Race Control for the red flags,” Christopher Haase said after having returned to the pits.”

Still the fastest non GT3 is the SCG004c of the Scuderia Glickenhaus in 17th position.

Manuel Metzger: “Physical I’m okay but mentally less. It’s very disappointing. We contested our first stint on the monsoon tyres and switched to ‘drying wets’ for the second. But then it began to rain again. Therefore, I slightly backed off as I knew from my team-mates that this tyre doesn’t cope well with these conditions. While I never had raced on these tyres, to date. Then I wanted to smoothly accelerate out of the small ‘Karussell’ – but lost it all of a sudden. I’m so sorry for the team as the car ran just great.”

Jörg Bergmeister: “I completed 1.5 stints and that was okay for an old man like me. I occasionally was the fastest car out there and succeeded in gaining some ground. It was fun. In the closing stages of my stint the rain began to again fall heavier. We raced on wets but with very low pressure. And this didn’t work in the rain. Furthermore, there were wafts of mist – things don’t get easier.”

Alex Sims for Nick Yelloly ho says: “The conditions are changing permanently. When I was driving it was getting dark and the rain got heavier. It’s very slippery and in addition, fog got up. That’s extremely dangerous. I once had to go onto the grass as I had overlooked another car. Currently it’s all about surviving.”

The Walkenhorst BMW rejoins the race after a two-hour repair break..