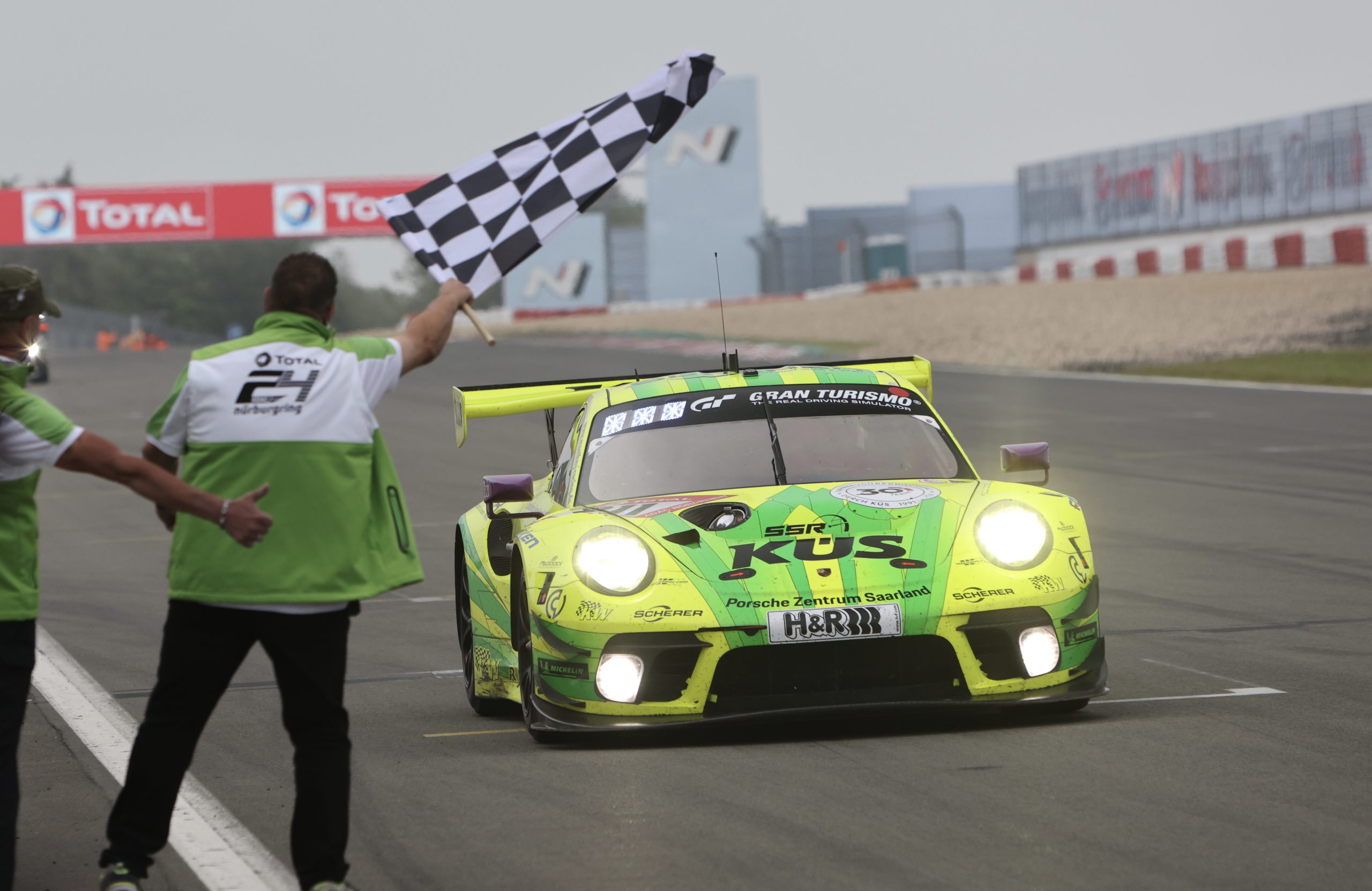 Two records at once: record winner Manthey Racing emerged victorious from the shortest-ever ADAC TOTAL 24h race. A 14.5-hour stoppage due to fog turned the 49th edition of the legendary “Eifel marathon” into an “Eifel sprint”. After a magnificent opening phase and a faultless final stint, French driver Kevin Estre claimed the seventh win for the team from Meuspath in the Manthey Porsche #911 – the perfect gift to mark the 25th anniversary of the team’s foundation. Italian Matteo Cairoli and Danish driver Michael Christensen hailed their team-mate as Estre rolled over the finishing line in “Grello”, 8.8 seconds ahead of the Rowe BMW #98 with final driver Sheldon van der Linde, Martin Tomczyk, Marco Wittmann and Connor de Phillippi. It was the second-closest finish in the history of the race. Third place was claimed by the GetSpeed Mercedes-AMG #7. This result put three different brands on the podium.

“Although it was a shame for the spectators here at the circuit and those watching on television: from the point of view of safety, there was no alternative to stopping the race last night,” said Manthey CEO Nicki Raeder. “This turned the 24h classic into two thrilling sprint races over the shortest distance in the history of this event. We still had to put everything into attacking and give it our all from the first lap to the finish, under extremely challenging conditions. But we are so pleased with this success, as it marks a very special celebration of the 25th anniversary of Manthey.” This is the first win at the ADAC TOTAL 24h race for each of his three drivers. “It is unbelievable, I am lost for words. It was such a tough race, very intense. I gave it my all and it was very difficult to get through it without any mistakes. I am so proud of this team,” said Estre.

Rowe Racing back on the podium

“The race was a bit short but was still very intense and exciting,” said team principal Hans-Peter Naundorf, whose team followed up last year’s victory by reaching the podium once again with the Rowe BMW #98. “The second place means a lot to me. Of course it is a shame to just miss out on the win like that. But it is always a special feeling to stand on the podium at the 24h race. It is also a great accolade for the team. Now it’s time to celebrate,” said Martin Tomczyk. The Rowe BMW #1 was on a mission to defend the title but retired early due to a technical defect, having been involved in the leading group for a long period.

Anniversary edition in May 2022

With a total distance of just 59 laps and 1,497.302 kilometres, the 49th edition of the ADAC TOTAL 24h race proved to be the shortest-ever in the history of the event. The previous lowest number of laps had been 76 in 1992 and this year’s event undercut that significantly. Wheels were in motion for just 9.5 out of the 24 scheduled hours. All participants, organisers and fans are now hoping that the 50th anniversary edition of the ADAC TOTAL 24h race from 26th to 29th May 2022 will go the distance, and that it can take place with stands full of spectators.

Interruption due to the weather in the Eifel

It all went quiet in the Eifel at 21:29 on Saturday evening as Clerk of the Course Walter Hornung stopped the race with a red flag due to the thickening fog banks. “We would have loved to have provided the typical 24h feeling during the night for the teams and spectators at the circuit and those at home, but the weather conditions made this impossible. Safety is absolutely paramount,” said Hornung. “It was not easy – you had the moisture, the fog and some oil on the track. The red flag was the right decision as it would have been impossible to carry on driving,” agreed Michael Christensen.

After fog interrupted proceedings for 14.5 hours, the race restarted at 12:00 after a warm-up lap. Philipp Eng held on to the lead in the Rowe BMW #1 ahead of Maro Engel in the HRT Mercedes #4. Both drivers pulled away from the Manthey Porsche #911 with Kevin Estre during the first three laps, after he had moved up from fifth to third place. Just before the end of the 38th lap, Mercedes driver Engel emerged unscathed after smashing into the crash barriers in the Hohenrain chicane. Behind the leading Rowe BMW #1 and the Manthey Porsche #911, Martin Tomczyk moved into the final three hours of the race in third place at the wheel of the second Rowe BMW #98.

Thrilling action in part one of the race

After the race began on Saturday afternoon, spectacular chases and chaotic weather conditions made their mark on the first hour of the event. Kevin Estre had progressed from eleventh on the grid to take the lead in “Grello” thanks to some bold overtaking manoeuvres, while Martin Tomczyk moved the Rowe BMW #98 from 25th position up into fourth. Heavy rainfall then led to numerous accidents on the track, forcing most teams to make an early switch to wet-weather tyres. Events then calmed down a little on the track, before the fog put a stop to the action.