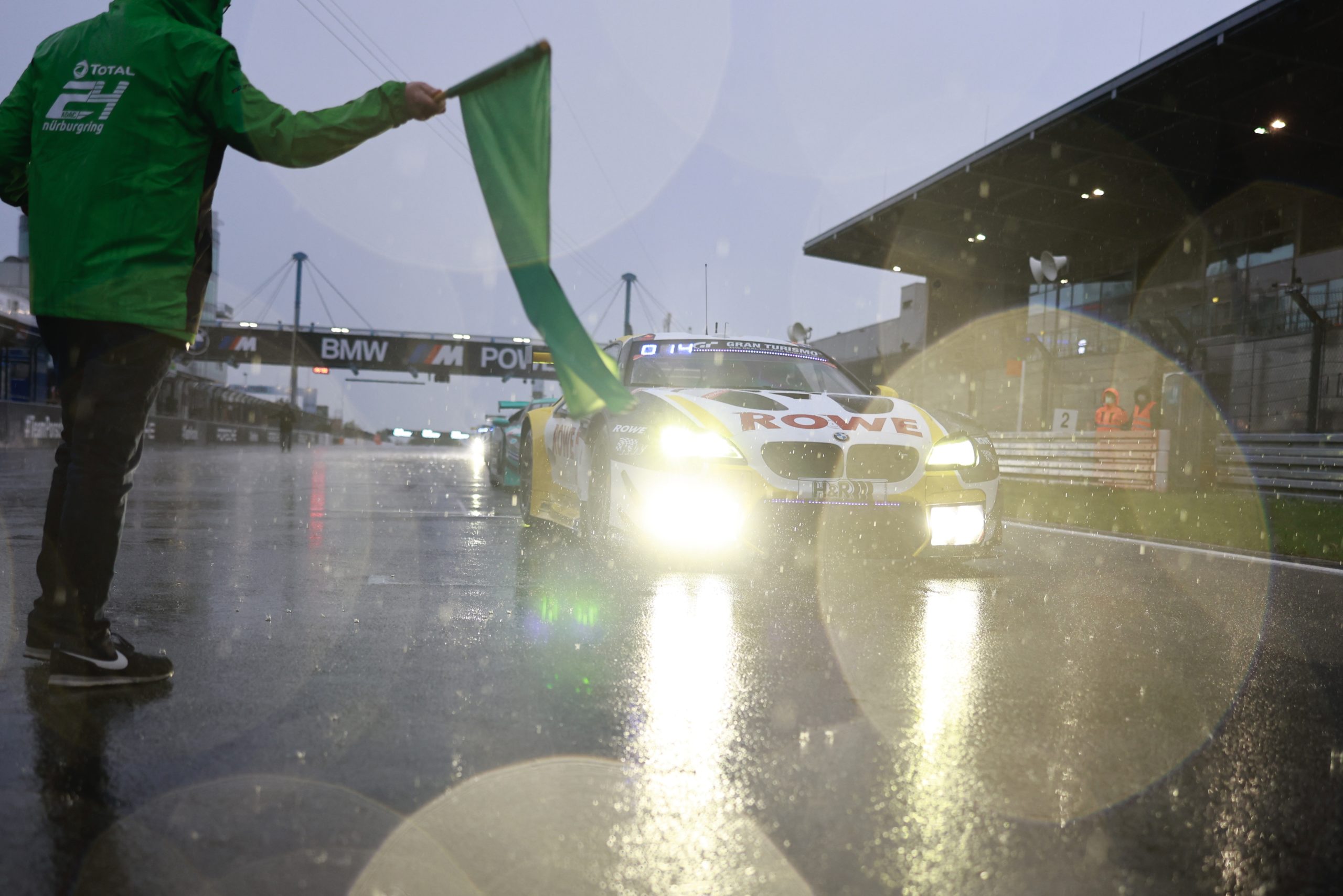 On Friday evening, Nick Yelloly recorded a best time of 10:01.619 minutes at a rain-soaked Nürburgring to claim pole position in the 49th ADAC TOTAL 24h race for the defending champions. British driver Yelloly kept his cool in the #1 Rowe BMW for the defending champions as the rain poured down, securing the sought-after Glickenhaus Trophy for the fastest driver at the Ring, which he will be presented with on Saturday, around 45 minutes before the race starts.

“That was anything but easy. In fact, it was totally mad. There was aquaplaning everywhere. The team put in some unbelievable effort. That is my first pole position here and I am really proud of it. We will be starting right where left off last year,” said the BMW driver, who displayed nerves of steel on the 25.378-kilometre combination of Grand Prix circuit and the legendary Nordschleife, which was soaked by a downpour during spectacular individual time trials in Top Qualifying 2 on Friday evening.

Yelloly had been part of the victorious Rowe trio last September and his second lap saw him pull 2.308 seconds ahead of Axcil Jefferies who had held the lead in his #19 Konrad Lamborghini. Due to a tyre change, Jefferies only had one chance during the individual time trials. “It was tough with just one lap. We had decided to change the tyres after the out lap. And this decision by Franz Konrad and the team proved to be spot on. It is brilliant to get the car back in one piece and to still be on the front row,” said a visibly satisfied Jefferies. Manuel Metzger claimed third place in the #4 HRT Mercedes AMG, having been first on the grid last year. The best Audi was the #8 Phoenix Audi with Nicky Thiim at the wheel, in eighth place. The best Porsche was the #3 Rutronik Porsche with Julien Andlauer in ninth position.

Top Qualifying 1, which decided who would claim the final four spots for Top Qualifying 2, finished just seconds before the advent of a major downpour. Racing against time to beat his rivals and the weather, Dries Vanthoor prevailed in the #15 Phoenix Audi with the best time of the weekend thus far, 8:12.319 minutes. Maro Engel in the #6 HRT Mercedes AMG, Augusto Farfus for the #77 BMW Junior Team and Marco Mapelli in the Hankook Lamborghini also made it. That was the end of the day’s work for this quartet, as the regulations for Top Qualifying 2 required a change of driver. This meant that Engel was not able to try to claim a hat-trick of pole positions, having reached first on the grid in 2019 and 2020. He was the very first winner of the Glickenhaus Trophy in 2016. He was followed in 2017 by Glickenhaus driver Jeff Westphal, and Laurens Vanthoor in 2018.

24H Race with fans in stands and extensive media presence

The 49th ADAC TOTAL 24h race retains the traditional start time of 15:30 on Saturday. NITRO will broadcast the “Eifel Marathon” in its entirety, live on TV, and you can also follows the race on the YouTube livestream (youtube.com/24hnbr) or on the official homepage under www.24h-rennen.de/live. That is also where you can find more news, results, live timings and a comprehensive race ticker. The last few tickets for Saturday and Sunday are available under www.nuerburgring.de. Up to 10,000 spectators, who can provide negative test results, or proof of vaccination or recovery, can be there in the stands on the Grand Prix circuit to watch the race on each day.

The second highlight of the weekend was the FIA World Touring Car Cup (WTCR) on Friday. Luca Engstler was the only German driver, and reached the second row of the grid in his Hyundai Elantra N TCR thanks to fourth place in qualifying. As had been the case last year, pole position was claimed by Honda driver Nestor Girolami from the German All-Inkl.com team. The front row was rounded off by Jean-Karl Vernay (France) from the German Engstler Hyundai N Liqui Moly Racing Team, ahead of Girolami’s compatriot and team-mate Esteban Guerrieri.

Delighted winners after tumultuous race in the 24h Classic

The afternoon’s 24h Classic race was also subject to the whims of the weather gods, and was temporarily interrupted due to heavy rain. At the end, it was Ingo Pütz and Christoph Breuer at the wheel of the #578 911 RSR who celebrated the overall win. “It proved to be absolutely the right decision to switch to wet-weather tyres for the re-start directly after the warm-up lap. By the end, it was almost too dry for the wet-weather tyres but we managed to hold on,” said Christoph Breuer. The Opel Kadett #504 of Chris Esser and Nico Verdonck crossed the finishing line in second place, just 3.7 seconds back. The #508 BMW 635 CSi of Jürgen and Peter Schumann and Olaf Manthey secured third place in the overall standings.