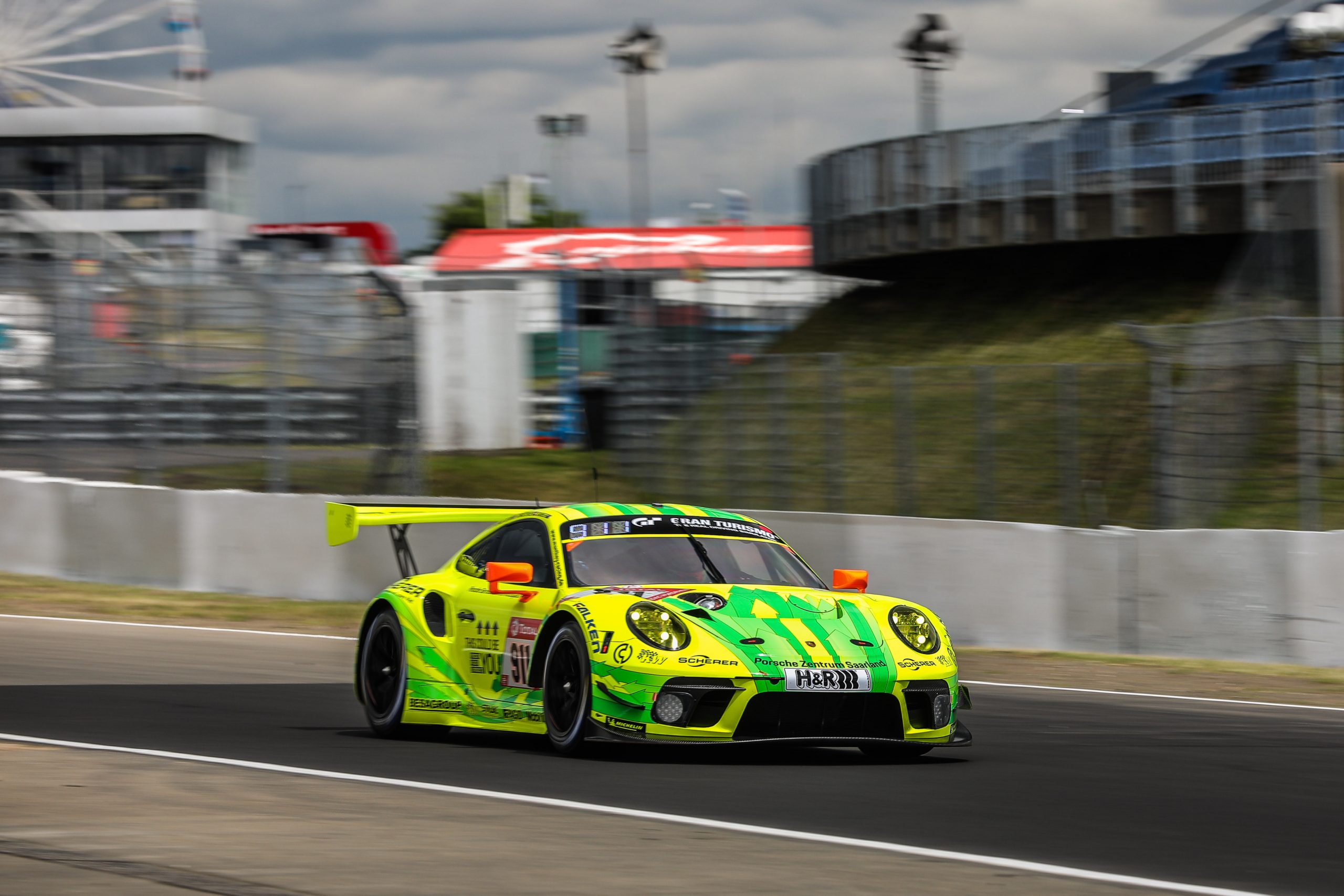 The Manthey-Porsche #911 set the fastest lap time in the second qualifying session for the ADAC TOTAL 24h Race at the Nürburgring. Virtually in the last second of the session, held on Friday afternoon, Belgian Laurens Vanthoor crossed the line of the 25.378-kilometre combination of Nordschleife and GP circuit in 8:17.449 minutes, thus outqualifying the previous leader, the Konrad-Lamborghini #7, by a second. Just 75 thousandths of a second behind the Lamborghini, the Phoenix Audi #4 finished third. The next item on the agenda is the public drawing of the Top-Qualifying starting order from 18:00hrs. The battle for pole in the individual time-trial format will begin at 19:00hrs, with every competitor having the opportunity to set two timed laps.
#1 – Porsche 911 GT3 R (Lietz,Makowiecki,Pilet,Tandy)
16:29hrs / Patrick Pilet: “My laps were okay but choosing the suiting tyres is tricky. It seems to be warm but the track isn’t. I expected more grip. Now we want to sort out some details for the Top Qualifying.”
#6 – Mercedes-AMG GT3 (Assenheimer,Bastian,Buurman,Piana)
15:23hrs / Patrick Assenheimer: There was a lot no traffic. We went out rather early, right after the lights went green. Therefore, we had expected that just some 10 to 20 cars would be ahead of us. But many of them went out very slowly and so, we had to slightly slalom around them. But the lap was good for us as we found out that the track was okay. The car handles well and now we hope that the flying Dutchman sets the necessary time.”
#8 – Porsche 911 GT3 R (Slooten,Luhr,de Leener,Jans)
16:30hrs / Lucas Luhr: “As usual it is very exciting here at the Nürburgring and in the heavy traffic it’s a gamble. The balance of our car is fine and we hope that we will make it to the Top Qualifying. Then we will have some time for the fine-tuning but we still have to find something to be able to deliver a hammer time.”
#12 – Porsche 911 GT3 R (Klohs,Kern,Olsen,Cairoli)
16:03hrs Matteo Cairoli: “We succeeded in making some setup improvements, on the past laps. The car handles well and we are confident regarding the Top Qualifying.”
#29 – Audi R8 LMS (Mies,Rast,van der Linde,Haase)
15:57hrs / René Rast: “For me, the second qualifying was a relaxed session. I completed my obligatory laps as doing so was my first goal. The race action out there was really civilised and the number of incidents was limited. The car handles well and I’m excited to find out what will happen tonight.”
#30 – Porsche 911 GT3 R (Abbelen,Müller,Renauer,Preining)
15:46hrs / Thomas Preining: “It’s my first appearance at the Nürburgring and I feel more and more at home on the track. The car handles well and we have found the setup we wanted to have. There are just some details that have to be optimise but doing so won’t be a problem. I wasn’t able to set a really competitive lap time as I had to pass a car in every corner. Now I’m looking forward to the race.”
#39 – Nissan GT-R Nissmo GT3 (Menzel,Liberati,Jöns,Vaxiviere)
15:32hrs / Nico Menzel: “I went out on used tyres to check the car. Now, Edoardo and Matthieu have to take us to the Top Qualifying. We have got good chances in the Pro-Am class.