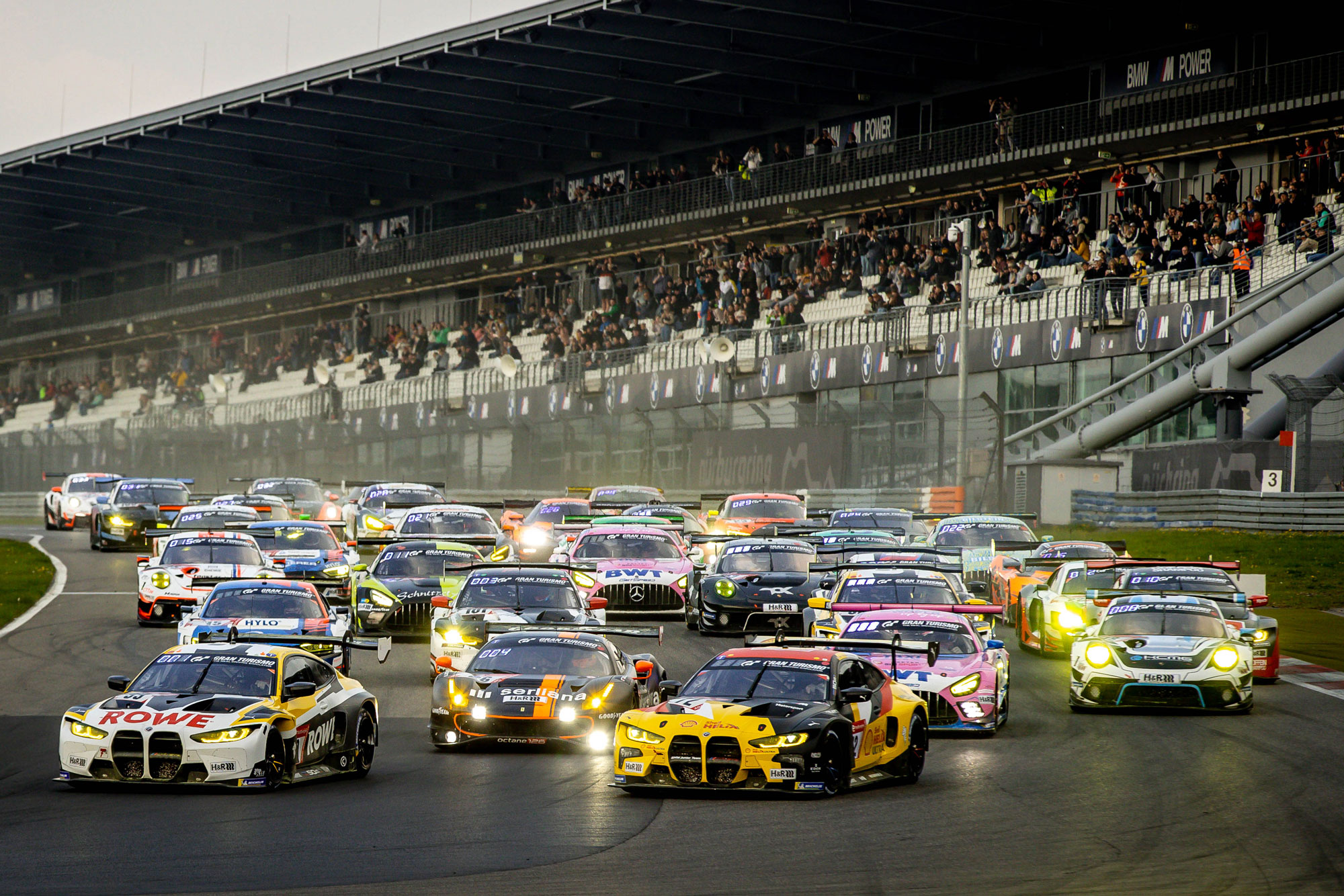 13. May 2022
The cards are now on the table: with the publication of the provisional entry list for the ADAC TotalEnergies 24h Nürburgring (26 – 29 May), it is clear which teams will be lining up at the Ring to win this particularly prestigious edition of the endurance classic. 138 teams, including 36 teams in the overall winning classes SP9 (FIA GT3) and SP-X alone, will compete in the longest race of the year on the most demanding race track in the world. The winners’ glass trophy has a special value this time because it is the 50th edition of the tradition-rich race. But the anticipation among drivers, fans and officials is also great because, just in time for the big anniversary, the spectator areas will be open again without any restrictions: The battle of the best endurance teams and drivers for the crown of the Nordschleife will finally take place in front of a large crowd again. Tickets for the ADAC TotalEnergies 24h Nürburgring are available in advance at the Nürburgring ticket shop at www.nuerburgring.de.

Start number #1 naturally belongs to last year’s winners at the 50th edition of the 24h: With Michael Christensen and Kevin Estre, Manthey Racing is sending two of the winning drivers back into the race in the Porsche 911 GT3 R, who will be joined by Frédéric Makowiecki and Laurens Vanthoor. Also in contention for victory will be Rowe Racing (two BMW M4 GT3 #98 and #99) and Mercedes-AMG Team GetSpeed (two Mercedes-AMG GT3 #3 and #4), both teams that shared victories in the two prologue races during the ADAC 24h Nürburgring Qualifiers. Audi was also represented on the podium of the 24h Qualifiers – by Team Lionspeed by Car Collection Motorsport (P3 in Race 2), which is competing with the #23. In addition, Scherer Sport Team Phoenix (#5) also represents the Ingolstadt-based squad, which is the second most successful of all time at the 24h with five overall 24h victories behind Manthey. There is certainly no shortage of favourites in the giant field, and there are also countless exciting constellations in the many competition classes from top to amateur sport.

Even odds make for exciting sport

Most recently, it seemed to be the BMW teams that had the advantage on the Nordschleife this year. Rowe Racing and the BMW Junior Team were in top form at the 24h Qualifiers and certainly travelled home with plenty of extra motivation. But even though the chances of victory on the Nordschleife this season swing in favour of one manufacturer for once, depending on the form of the day, the weather and race fortune, the question of the top favourite is difficult to answer. “At the 24h Race, all the manufacturers will be on a par, I’m sure of that,” analyses Max Hesse (BMW Junior Team), adding with a fine smile: “We’ve shown everything that’s in the BMW M4 GT3 in preparation – of course we can’t answer what the other manufacturers have done. We are focusing on us.” The fact that not every team from every manufacturer shows what they are capable of in the 24h preparation has been part of the “good manners”, so to speak, on the Nordschleife for years. But the constant evaluation of the extensive data logging during this phase ensures that the regulations experts have a good idea of the true balance of power: For years, this has ensured extremely even chances, a lot of brand diversity in the top positions and extremely exciting races at the 24h. “We have a few adjustments in the BoP, and we will readjust nuances before the 24h,” reveals race director Walter Hornung after the findings from the 24h Qualifiers have been evaluated. “If necessary, we can even make some adjustments on the 24h weekend itself. Because a balanced field guarantees the most exciting sport for the spectators.”

The official programme at the Nürburgring already starts on Wednesday afternoon in the centre of Adenau. In the racing town on the Ring, there will be once again the “Adenau Racing Day” with racing drivers and cars, this time including many legendary participants from the past 49 editions of the race. The wheels will start turning on Thursday morning (26 May). After the traditional opening with a performance test of the RCN, the qualifying and practice sessions will follow one after the other. The spectator areas will be well-filled by then, because “advance ticket sales are going pretty well”, as race director Walter Hornung knows. The camping areas around the Nordschleife are open again after a two-year forced break, and many fans are just as eager to be part of the most beautiful motorsport festival of the year again. “I’m really looking forward to the 24h, the fans will tear the place down,” believes Maximilian Götz (Mercedes-AMG Team GetSpeed). Especially as there is a lot on offer for the visitors. In addition to the traditional highlights, such as the Falken Drift Show in the Müllenbachschleife on Friday evening, there will also be programme items around the 24h anniversary. These include the exhibition of automotive 24h legends on the ring°boulevard and a large get-together of former 24h overall winners (combined with an autograph session, of course). In this environment, the visitors turn night into day, create an incomparable festival atmosphere and are an important part of the show in general – not least the active participants know this. Maximilian Götz, for example, reveals: “Even though I’m here to give my best performance as a racing driver, I’m also a fan of the Nürburgring and the event. I will also try to enjoy the atmosphere at the 24h.”