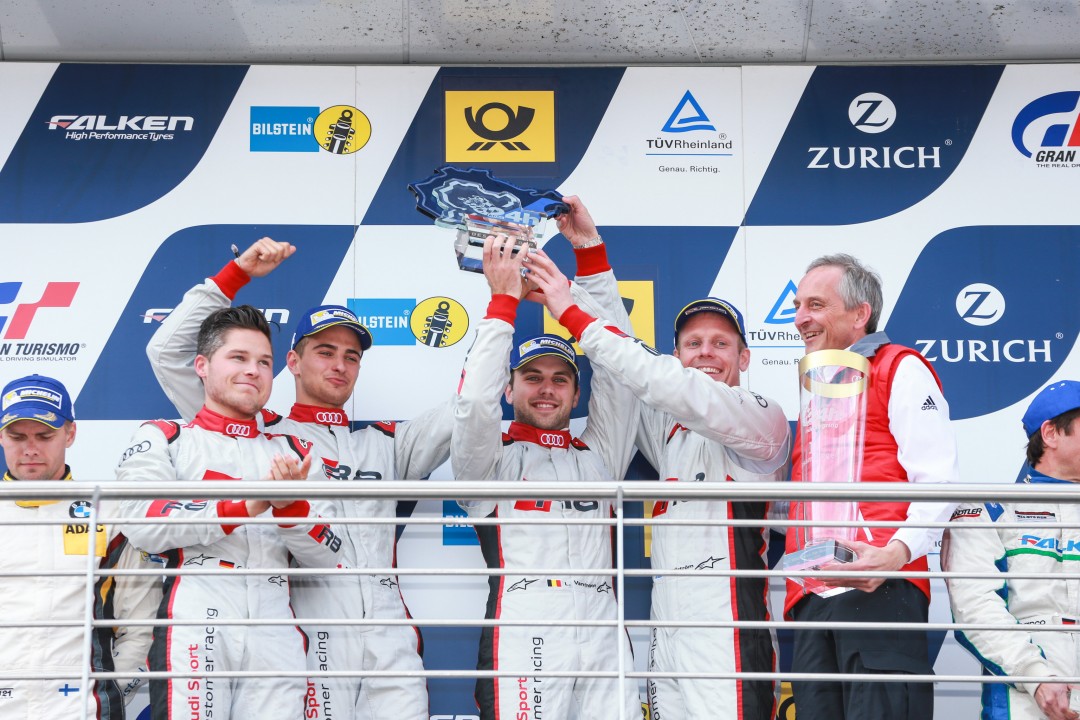 The winners of the 43rd ADAC Zurich 24h Race are Christopher Mies, Edward Sandström, Nico Müller and Laurens Vanthoor. After 156 laps at the combination of GP circuit and Nordschleife, Mies took the chequered flag with the Audi R8 LMS (#28) entered by the Audi Sport Team WRT as race winner. His lead over second-placed Maxim Martin in the BMW Z4 GT3 (#25) of the BMW Sports Trophy Team Marc VDS that was raced by the line-up Maxime Martin, Lucas Luhr, Markus Palttala and Richard Westbrook amounted 40.729 seconds. This was the closest finish in the history of the race. Third place was secured by Peter Dumbreck, Wolf Henzler, Martin Ragginger and Alexandre Imperatori in the Falken Motorsports Porsche 911 GT3 R (#44). For information around the ADAC Zurich 24h Race, impressions and background features please visit the event’s website: www.24h-rennen.de.
In the closing stages of the unique motor-racing marathon, staying power was the most important attribute. The podium positions deservedly were secured by the teams that set consistently fast lap times throughout the race and were able to contest the entire race without encountering major problems. Due to the changeable weather conditions – particularly in the night – the race proved to be one of the most challenging editions of the recent past. Numerous favourites were forced into early retirements. The competitiveness on the grid was enormous. Temporarily, sports cars of seven different manufacturers held top-10 positions. Over the course of the race, the crowds witnessed 35 changes in the lead – another record in the history of the Eifel classic.
“To have won the 24h race is just incredible,” cheered DTM driver Nico Müller. “It was the first 24h race for the new Audi R8 LMS and it was anything but easy. We were pressurised throughout the race. Great that the car survived in such a great style. It was my only second 24h race and it was an honour for me that I was offered the chance of being a part of this project.” And his team-mate Christopher Mies added: “The last lap gave me goose bumps.”
The BMW camp also was delighted. “What a fantastic result for the BMW Z4 GT3 in its final works-supported appearance – and even more so in consideration of the extremely competitive field,” said BMW Motorsport Director Jens Marquardt following the second place secured by Marc VDS. “Although we were pipped in the fight for our 20th overall win, the combination of a faultless job delivered by team, drivers and a reliable, well-engineered vehicle kept the extreme excitement alive up to the finish line.“ Having finished fourth in 2014, Falken Motorsports made it to the podium, this year. The delight of the drivers and the team is huge,” said Peter Dumbreck. “The entire squad did a fantastic job throughout the 24 hours. In the night, with the changeable weather conditions, the racing proved to be particularly challenging. But we always were lucky in the tyre gamble and the Falken tyres coped with the challenges represented by the conditions in great style. At the same time, we didn’t encounter any major problems throughout the race and only had to come in for the scheduled pit stops.”
2016 24h race on the Corpus Christi weekend and once again with the Word Touring Car Championship in the support programme.
The 44th edition of the ADAC Zurich 24h Race will be held from 26th to 29th May, 2016, at the combination of GP circuit and Nordschleife. This means that the motor-racing highlight in the ‘Green Hell’ will be contested on the Corpus Christi weekend. And once again, the World Touring Car Championship, WTCC, will be part of the legendary event’s support programme. “The FIA calendar for 2016 has not yet been fixed and approved but following the successful debut in this year’s event we are more than confident that the best touring-car drivers of the world will once again come to the Eifel to race at the Nürburgring Nordschleife,” said Race Director Walter Hornung. He came to a positive conclusion: “Once again, the 24h race demonstrated why the Nordschleife fans call it ‘The Race of the Year’. It provided great, enthralling motor racing and a huge feast for the entire family. That’s the mix making this race so fascinating for both the drivers and the fans.”