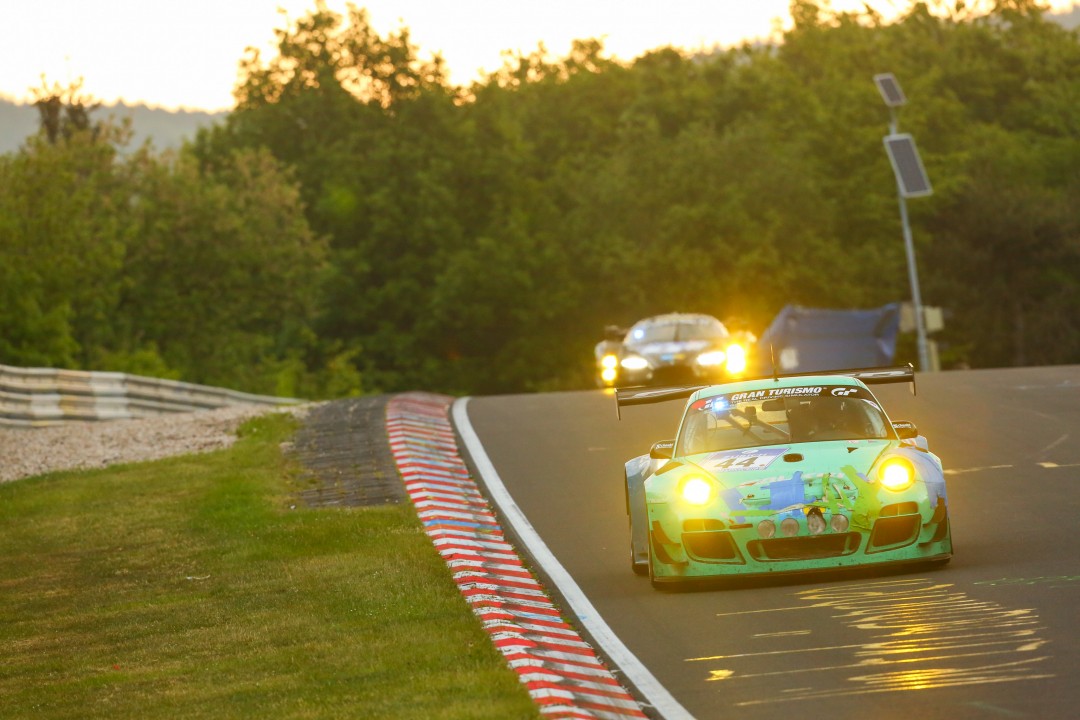 Three hours before the winner of the 43rd ADAC Zurich 24h race at the Nürburgring will cross the finish line of the combination of GP circuit and Nordschleife, the race has entered an ‘the-calm-before-the-storm’ phase. Since the early morning hours, the two leading cars have regularly been alternating as race leaders. Now it’s about driving safely at the limit to absolutely go for it on the final laps. One thing can be taken for granted: a mistake made at this point in time and the chance of winning the legendary race is over. With 21 hours contested, the order hasn’t changed: the  Audi Sport Team WRT Audi R8 LMS (#28) leads with the BMW Sports Trophy Team Marc VDS BMW Z4 GT3 (#25) the Falken Motorsports Porsche 911 GT3 R (#44) following in second and third positions respectively.
5 – Bin Turki Al Faisal / Haupt / Buurman / van Lagen (Mercedes-Benz SLS AMG GT3)
11:34hrs
Buurmann for Haupt. Technical Director Marvin Wagner: “We now will opt for another strategy. To make better use of the sets of tyre, we will switch to shorter seven or eight-lap stints.”
9 – Lauck / Franchitti / Jahn / Mailleux (SCG 003c)
11:15hrs
Franchitti comes in for what is supposed to be a scheduled stop but turns out to become a major check. Manuel Lauck: “While changing the wheels we realised that oil was running out of the left rear wheel hub – a hint to a broken drive shaft. To avoid a break down we now will check the issue extensively.”
11:21hrs
Check completed, rejoins the race.
11:25hrs
Glickenhaus says: “The drive shaft is okay. But now we have a problem with the electronic throttle. The engine didn’t respond to the throttle but we were able to solve the problem.”
11:38hrs
The team prepares for another pit stop. Race engineer Dario Pergolini: “Manuel Lauck contacted us via radio from the Nordschleife and informed us that the car once again temporarily didn’t respond to the throttle. He now will come in and we will check the issue.”
11:45hrs
Rejoins the race.
11:49hrs
Manuel Lauck informs the team via radio that the car is running flawlessly, again.
11 – Primat / Brück / Schmid / Seefried (Bentley Continental GT3)
11:48hrs
Clemens Schmid replaces Primat. Primat: “The Nürburgring 24h Race is the greatest GT race in the world. A successful appearance in this race represents a very good business card. The Bentley debut in this event is successful. We made only few mistakes, so far, but gathered a lot of experience. For us, finishing is the most important goal but we would love to make it to the top 10.”
15 – Yoong Loong / Cheng / Lee / Thong (Audi R8 LMS ultra)
11:18hrs
Scheduled pit stop.
17 – Laser / Cerruti / Edwards / Keilwitz (BMW Z4 GT3)
11:25hrs
Edwards replaces Laser.
25 – Martin / Luhr / Palttala / Westbrock (BMW Z4 GT3)
11:56hrs
While the leaders are pitting, the Marc VDS-BMW regains the lead.
12:01hrs
Back in the lead on lap 129. The 30th change in the lead!
12:10hrs
The next change in the lead as it’s the Marc-VDS BMW’s turn to pit, now. no driver swap.
26 – Farfus / Müller / Catsburg / Adorf (BMW Z4 GT3)
11:07hrs
Pit stop. Catsburg stays in the cockpit for a double stint. Team Manager  Bas Leinders: “The car is running absolutely flawlessly.”
28 – Mies / Sandström / Müller / Vanthoor (Audi R8 LMS)
11:03hrs
29th change in the lead. The Audi is back in front as the MarcVDS-BMW comes in.
11:18hrs
Moment of shock for race leader Nico Müller: at the exit of the GP circuit, the Audi gets off the track and makes a 360° spin on the grass. Can continue.
11:55hrs
The leader pits. Nico Müller stays in the car for another stint. Short before the end of the stop the car catches fire when the petrol pump nozzle is pulled out of the filler neck but the fire is extinguished at once. Nico Müller rejoins the race.
35 – Buncombe / Hoshino / Krumm / Ordonez (Nissan GT-R nismo GT3)
11:03hrs
Pit stop with driver swap: Oshino for Ordonez. Brake discs and pads are changed. Ordonez: “I could really go for it. There weren’t any yellow flag periods. Now we can push hard.”
11:08hrs
Team Principal Bob Neville: “There are no more yellow flag phases and we will really push, now, as we want to make it to the top 10. On the other hand, we needed 3:20 minutes for the pit stop and therefore, we dropped back slightly.”
44 – Dumbreck / Henzler / Ragginger / Imperatori (Porsche 911 GT3 R)
11:02hrs
Dumbreck is replaced by Henzler. The front and rear skirts are taped to the car, once again. Henzler: “Cross your fingers for me. Should we succeed in defending our third place this would be the best result for a Falken Porsche in the history of the race.”
85 – Smith / Kane / Meyrick / Arnold (Bentley Continental GT3)
11:27hrs
Meyrick: “This is my first 24h race. I enjoy it so much that it’s difficult for me to get out of the car and let another driver take the wheel. We had our difficulties and only after half a day the car felt really good. We are learning consistently, gather data and try a lot of things.”