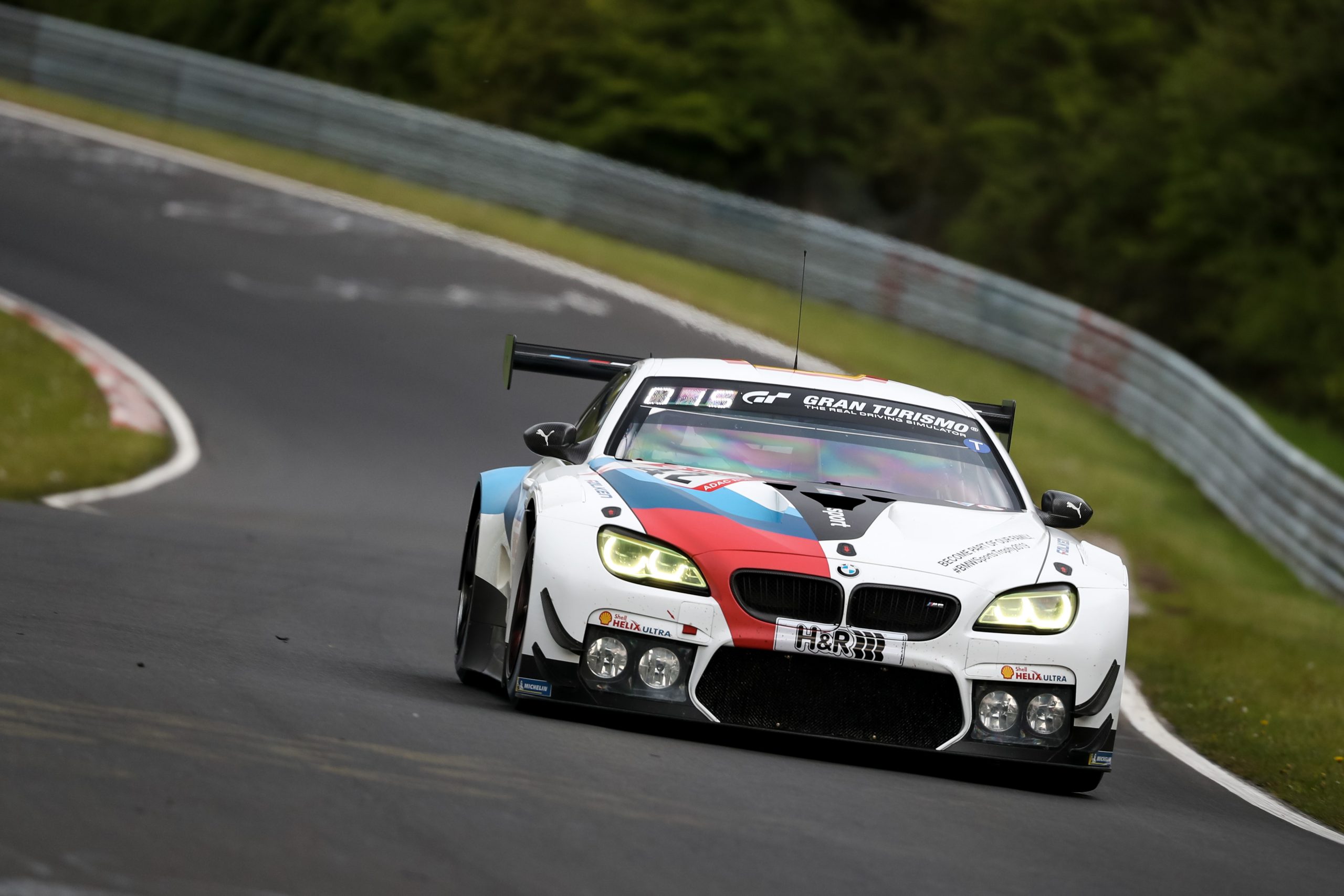 In the first qualifying session for the 24h Qualifying Race, held on Saturday evening, one of the most successful teams in the history of the ADAC TOTAL 24h Race set the fastest lap time. BMW Team Schnitzer driver Augusto Farfus (Brazil) crossed the line of the 25.378-kilometr combination of Nordschleife and GP circuit in 8:17.570 minutes. With his team mate Martin Tomczyk (Kolbermoor) and the native Lahsteiner Timo Scheider, the BMW M6 GT3 #42 holds the provisional pole, prior to the final qualifying session, with fellow BMW drivers Christian Krognes (NOR), David Pittard and Nicholas Yelloly (both UK) in the team Walkenhorst Motorsport #101 and the Phoenix Audi R8 LMS #4 raced by Marcel Fässler and Rahel Frey (both CH) following in second and third positions. Farfus used a phase when the track was largely dry and set his fastest lap time early in the session. And as rain began to fall soon afterwards, no other driver had the chance of stealing the provisional pole. But only on Sunday morning the battle for the pole will be over. Following the one-hour qualifying session (08:30 to 09.30hrs CEST), the 30 fastest teams have to deliver in the top-30 qualifying individual time trials. (from 10:30hrs CEST). While the six-hour Qualifying race will be started at 12hrs. And the motor-racing enthusiasts can witness the race action not only on site but also at home on their screens. A service made possible by ticker, live timing and video streams at the 24h Race website (www.24h-Rennen) and at YouTube.
Right from the beginning of the first qualifying session the action was dominated by BMW. In the early stages of the session, the Rowe-BMW #99 of John Edwards (USA) and Jesse Krohn (FIN) held the lead but then, Schnitzer’s M6 GT3 secured the top position. And Augusto Farfus, who will race this weekend in both the 24 Qualifying Race and the FIA Touring Car World Cup was the driver to set this time. Nonetheless, he hadn’t a lot of time for cheering as he had to get into a helicopter right after some high fives with his team mates to travel to the Dutch circuit at the North Sea coat. Augusto went out at the perfect point in time,” beamed Team Principal Herbert Schnitzer junior.”The track was really dry when he went out for his fast lap”. Team mate Martin Tomczyk also raved over the “sensational lap” of the Brazilian. “After all, he arrived here with a helicopter just a short time ago. So, it were the first Nordschleife lap times he set. And the fact that he secured provisional pole on his only third lap was really great. Should it be dry tomorrow things could get close again but with this time we should be able to match the pace of the front runners.”
Ferrari the fastest in the practice session. One of the favourites forced into retirement by crash in the wet
In the practice session at noon, rain also quickly turned the originally dry circuit into a wet track. In these conditions, the race action was dominated by completely different vehicles. Surprisingly, the Ferrari 488 (#55) entered by Teams Octane 126 held the top position the time screens. The Swiss crew comprising of Björn Grossmann / Simon Trummer / Jonathan Hirschi succeeded in outpacing the Getspeed-Mercedes-AMG #17 with the line-up John Shoffner, Janine Hill (both USA), Fabian Schiller (Germany) and Markus Palttala (BEL) as well as the Phoenix-Audi R8 #4. Meanwhile, the slippery track conditions forced two competitive Mercedes-AMG squads into early retirement. The two GT3 racers of Manuel Metzger (#2, Black Falcon) and Dominik, Baumann (#16, Getspeed) collided after Metzger had spun. Both cars were damaged to an extent that repairing them in time for the race was impossible. Both drivers were injured and taken to the hospital for safety reasons. The Porsche 911 GT3 R #911 also was involved in the incident but was able to return to the pits were it was repaired by the team. Porsche’s Kevin Estre described what happened. “I was just on my out lap and the second GT3 braked on the way into the banked corner but went just straight on. The same happened to me and behind me another Mercedes too. Fortunately my Porsche wasn’t damaged too seriously – but I had to pit nevertheless.”