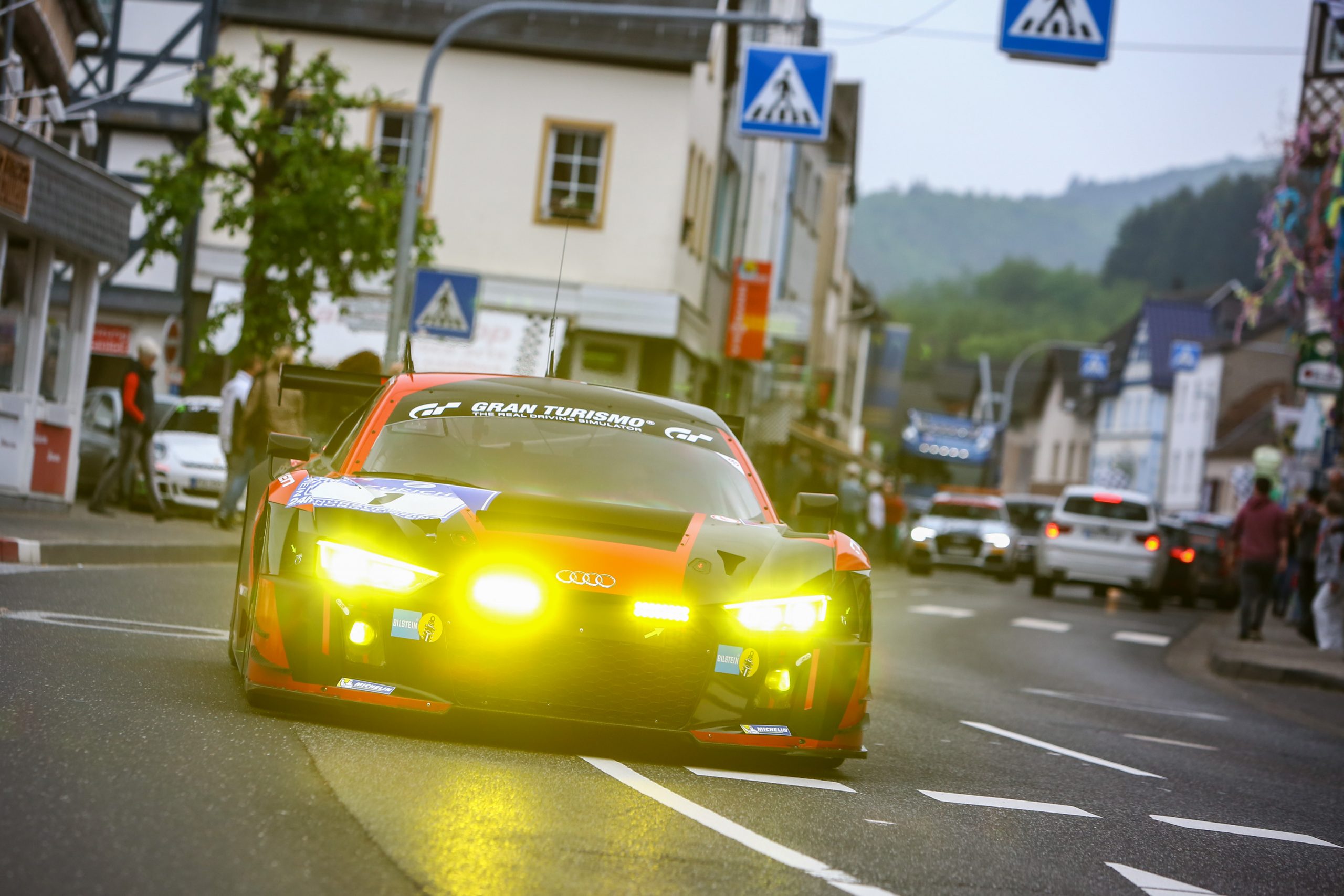 The long waiting is over: finally, the engines of the cars contesting the ADAC Zurich 24h Race are back roaring around the Nürburgring’s GP circuit and Nordschleife. And while yesterday’s Adenauer Racing Day got fans and drivers in the right mood, the on-track action will begin today. 160 vehicles are ready for the 24h Race and today at 15:45hrs CEST they will go out for the first time. And then, from 20:00hrs, things will get serious in the first qualifying session. All the important ADAC Zurich 24h-Race information including live timing, live ticker and live stream can be found throughout the weekend at www.24h-rennen.de.
Yesterday afternoon at the Adenauer Racing Day, more than 3,000 fans cheered for the drivers that are going to contest the ADAC Zurich 24h-Race or the World Touring Car Championship (WTCC) rounds. Extra for this day, Adenau decorated itself by painting its curbs red and white. “That’s a great advertisement for Adenau and a clear commitment to the Nürburgring,” said Andrea Thelen, chairman of the local chamber of commerce. The drivers also enjoyed spending time with the fans, signed countless autographs and answered numerous questions.
New vehicles in the battle for the win
But today it will get serious. At 15:45hrs, the drivers will go out for the first time to work on their cars in the practice session and from 20:00 to 23:30hrs, in the first qualifying session, they will begin the fight for the grid positions and the last positions in the Top 30 Qualifying respectively. And it may be expected that once again one of the GT3 vehicles will be the race winner. It goes without saying that Audi are keen on repeating the success they celebrated last year. “I want to again make it to the podium,” underlines Nico Müller who won the 20215 edition, “And if possible the one in the middle.” The Ingolstadt based manufacturer already contested the 2015 edition with the enhanced version of its GT3 racer and this year, the main competitors follow in their footsteps.
Austria’s Martin Ragginger will race a new Porsche 991 GT3 R: “The team is highly motivated and the new car represents huge progress. If you ask me, I don’t care about the Balance of Performance. I just get behind the wheel and go for it.” The youngest GT3 vehicle on the grid is the BMW M6 GT3. Marco Wittmann, the 2014 DTM Champion, is determined to push to the max, nevertheless. “No doubt: we want to win the race – but we also want to enhance the car,” he said. Meanwhile, Mercedes driver Thomas Jäger was more careful: “A podium would be nice.” For the Mercedes AMG GT3, it also will be the first Nürburgring 24h Race.
Crowd puller Nordschleife
The fans already just can’t wait for the start into race taking place on Saturday at 15:30hrs. Thousands already have arrived at the Nordschleife to not miss a single lap of this weekend’s race action. “Yesterday, when I arrived at ‘The Ring’, the fans already were everywhere,” Jäger said. “Really impressive.” Audi driver Müller also was thrilled: “The atmosphere here is unique – it’s a huge party for the fans. And we drivers only can hope to entertain them appropriately.”