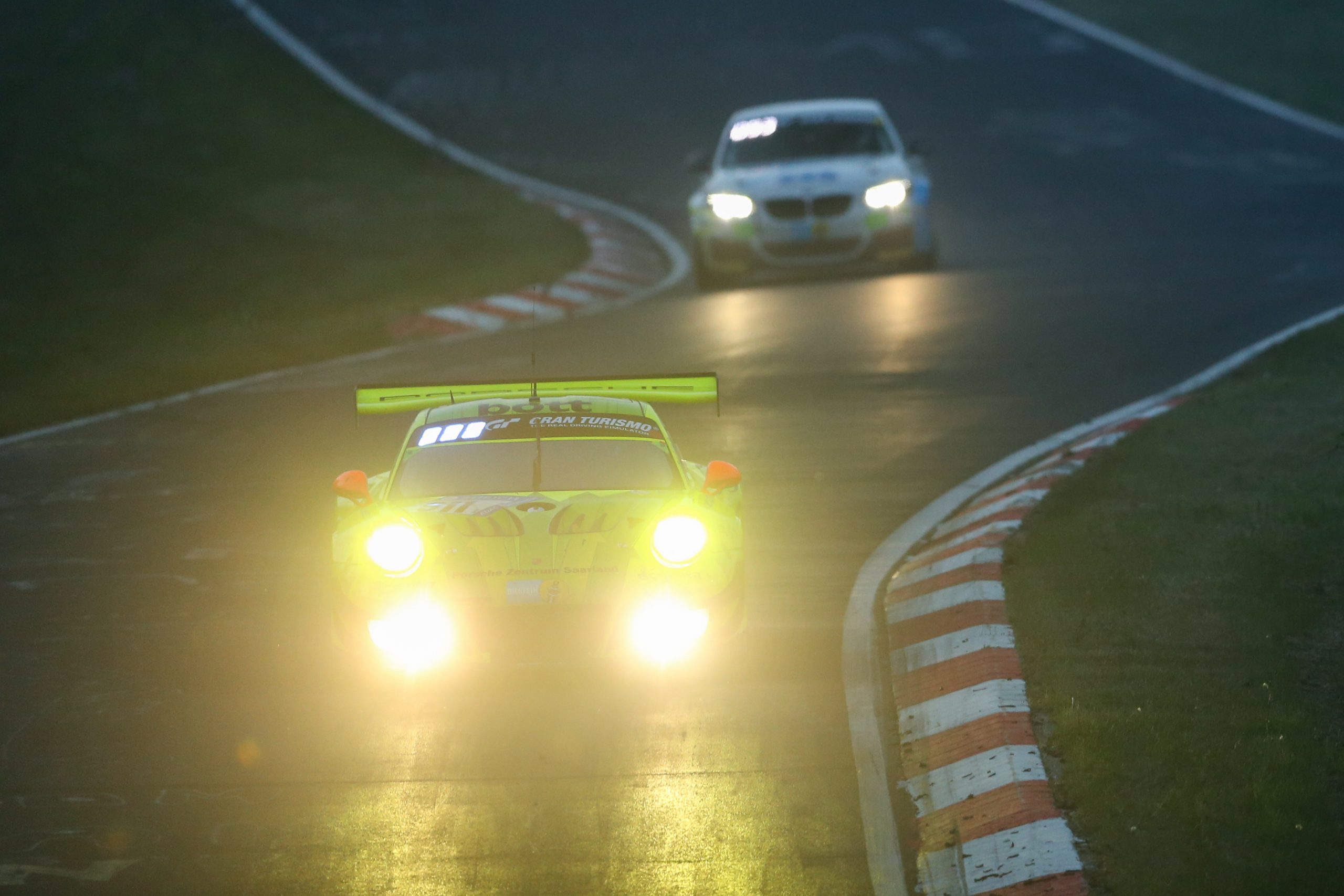 Setback for ROWE Racing in the seventh hour of the race. Due to a time penalty, the BMW M6 GT3 #98 drops out of the top flight. Meanwhile, Manthey Racing Can extend the lead of #911 and #912 also makes it to the top three. The Aston Martin Racing #7 holds second place between the two Porsches, Falken Motorsports holds fourth place. Glickenhaus also keep on working their way up, their SCG003c currently is fifth. An accident forces the Audi R8 LMS #8 into Retirement and causes a long-ish Code-60 phase.
#1 – Audi R8 LMS (Mies,van der Linde,van der Linde,Rast)
21:27hrs Sheldon van der Linde: “I had a really good stint. What a pity for Dries Vanthoor to have been forced into retirement so early. In the meantime, the competitiveness of the Audis seems to be improved. I’m somewhat surprised that we are that fast. We are really happy with the performance of the car.”
#8 – AUDI R8 LMS (Rast,Frijns,Vanthoor,van der Linde)
21:13hrs Accident following collision of Dries Vanthoor in the Hohenrain-Chicane. While drawing aside due the slowly cruising Mercedes AMG GT3 of Patrick Assenheimer (puncture), the Audi touches #307 307 (Wolfgang Weber), gets on the green and spins at the entrance of the chicane. While the drivers indicates that he is okay, the R8 LMS doesn’t look as if it will cover another metre in this race.
#11 – Mercedes-AMG GT3 (Assenheimer,Schmid,Bleekemolen,Marciello)
21:07hrs Patrick Assenheimer cruises slowly in the Schwalbenschwanz area. Puncture left front tyre.
#16 – Mercedes-AMG GT3 (Heyer,Asch,Sandström,Vautier)
20:36hrs Team receives a 3.32-minute time penalty for misconduct during a yellow-flag phase.
#24 – Audi R8 LMS (Winkelhock,Rockenfeller,Haase,Müller)
21:30hr Markus Winkelhock:”The car was great to drive, I found a nice rhythm. The race still is long, One of the Audi colleagues unfortunately crashed in a fast section. I hope he is well.”
21:58hr Team Principal Peter Mücke: “We touched another car while overtaking. The left rear tie rod broke in this incident but now the damage is repaired and the car can rejoin the race.”
#25 – Audi R8 LMS (Mücke,Jöns,Fässler,Kaffer)|Pierre Kaffer
22:26hrs “I was rather fast but then, on my penultimate lap, I was braked down by misfire. We don’t yet know the reason. Therefore, Marcel went out but he also has misfire.”
#30 – Porsche 911 GT3R (Arnold,Müller,Henzler,Campbell)
21:33hrs Matt Campbell: “The car handles well. Sometimes, overtaking other cars is somewhat difficult. Nonetheless, we haven’t had a close encounter with other cars, so far – and that’s exactly how we want it.”
#48 – Mercedes-AMG GT3 (Hohenadel,Dontje,Götz,van der Zande)
22:28hrs Christian Hohenadel is replaced by Indy Dontje and says: “We try to make the best of it. Following the crash in the opening stages we have two problems: a stabiliser broke and we still are trying to repair it – and the headlights are bent slightly down. This won’t be easy for Indy in the dark. But we don’t give up.”
#98 – BMW M6 GT3 (Catsburg,Westbrook,Edwards,Blomqvist)
20:42hrs Team receives a 3:32-minute time penalty for misbehaviour during a yellow-flag phase. The Rowe-BMW currently holds fourth place.
22:17hrs The Rowe-BMW, currently raced by John Edwards, comes in for a scheduled stop – and the time penalty.
#99 – BMW M6 GT3 (Sims,Krohn,De Phillippi,Tomczyk)
21:46hrs Car rejoins the race with Jesse Krohn at the wheel after a long repair break due to the broken radiator. Team wants to do a test lap to then decide if continuing the race makes sense. Team Principal HP Naundorf: “We try to get #99 going again. We have repaired several things, that could have been the reason. Now we wait if this really is the case and will decide afterwards.”
#102 – BMW M6 GT3 (Farfus,Palttala,Krognes,Schiller)
21:22hrs Pit stop for tyres, fuel and driver swap. Augusto Farfus gets into the cockpit for Fabian Schiller who says about his stint: “It was so difficult, extremely many yellow flags, Code-60 zones everywhere, crash barriers that had to be repaired. I had a lot of difficult situations with cars to be lapped but I think we may be happy altogether. We now will try to just find our rhythm. Along the track the camp fires slowly are lit – pure Nordschleife feeling.”
#705 – SCG003c (Mutsch,Mailleux,Simonsen,Westphal)
21:59hrs Team Principal James Glickenhaus: “We are really happy as we are having a trouble-free race. We are confident that our car will run even better when the temperatures drop in the night. Should this be the case we could slowly work our way up. We have seen several bad crashes that I just don’t understand. This is an endurance race. You don’t win by being two seconds faster by lap but risking to lose your car all the time.”
#911 – Porsche 911 GT3 R (Estre,Dumas,Vanthoor,Bamber)
20:41hrs Overtakes the Black Falcon Mercedes-AMG #4 at the end of a Code-60 zone in the Kesselchen area to take the lead on lap 34.