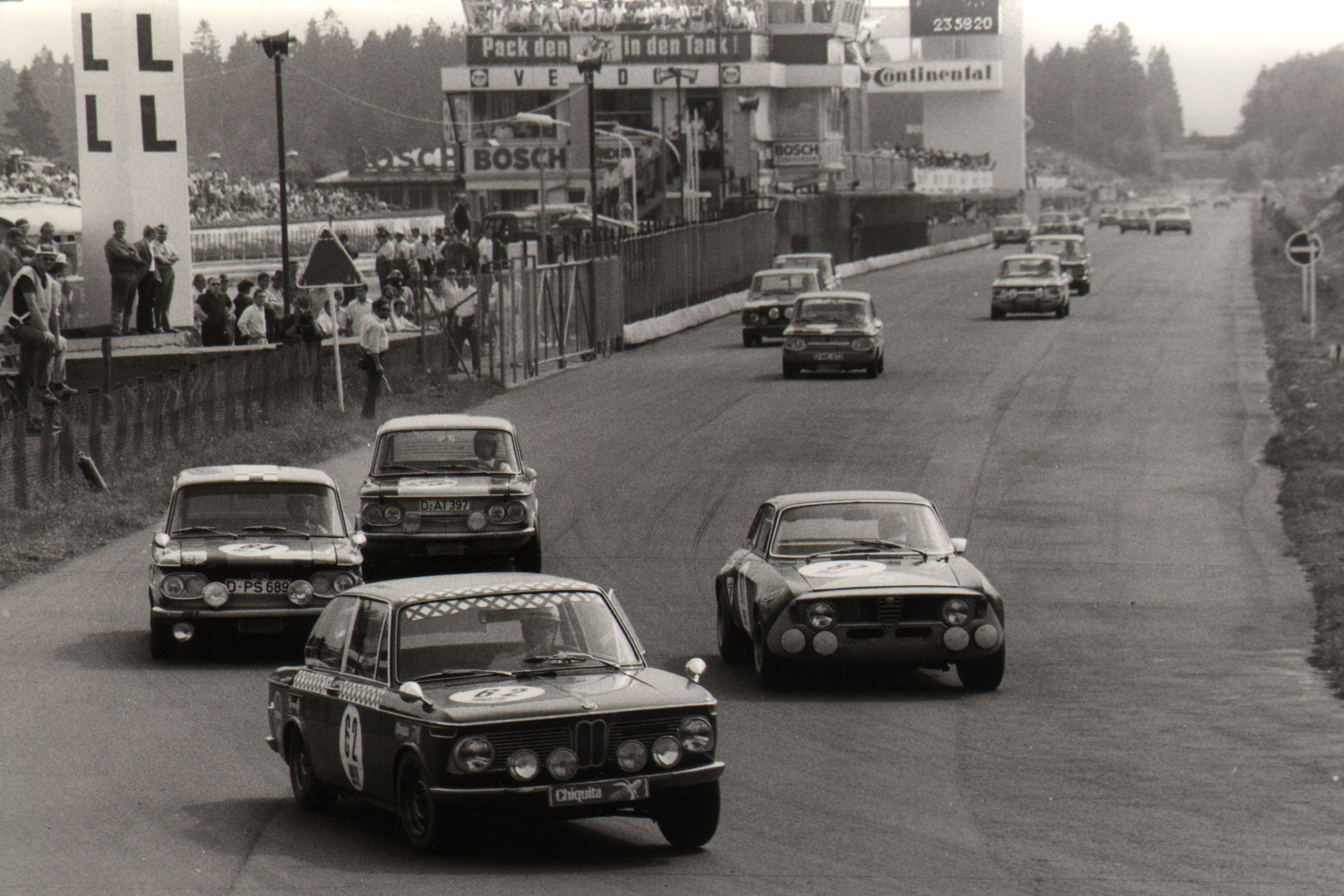 50 editions of the 24h race: An impressive anniversary is being celebrated in 2022 – but not a milestone birthday. In actual fact, 52 years have passed since the first event took place in 1970. Since then, there have been plenty of stories to tell. Stories of awesome heroes, fierce battles, crazy capers and oddities aplenty. A small selection of these tales documents the development of the race from a regularity rally for amateurs to an international motorsport highlight.

The early history of the 24-hour race was written from the mid-1960s by MSC Langenfeld, which used the Nordschleife for its long-distance tests. From 1967, this became the “24 Hours Nürburgring”, for which ADAC Nordrhein was official organiser as early as 1969. What initially started out as a regularity rally evolved into a genuine race from 1970. As well as the large international 24-hour classics, the Nürburgring finally also had something similar to offer – only for amateurs. “At first, it was almost a jovial and friendly affair,” recalls Kurt Bernards, who helped out at the time as a member of MSC Langenfeld. “Our president Otto Kurt Rutat was active as clerk of the course in those first years, up to the oil crisis, while the ADAC helped to reduce the economic risk as official organiser.”

Crowd puller from the word go

It has to be said that the word “amateur” was used loosely, even at the very start: Back then, works-supported cars battled it out at the front of the field. One example of this is the inaugural race in 1970, which was won by 19-year-old Hans-Joachim Stuck alongside Clemens Schickentanz in a Koepchen BMW 2002 ti. “The environment was obviously completely different for the drivers and teams,” recalls “Strietzel” Stuck. “You perched on collapsible chairs in the old garages and drank vast quantities of cola. There were no physiotherapists or motorhomes to retire to. What the event did have, however, was a lot of charm and flair.” And lots of spectators. “About 50,000,” says Stuck. Organiser Kurt Bernards recalls: “The cars were tearing round the Nordschleife at race speed in the middle of the night. That was something new, and people obviously found it exciting.”

There is plenty of entertainment on offer. On the track, the battle between BMW and the works-assisted Ford Capri. Porsche makes its debut in 1973, and finishes ninth. A fairground at the start/finish, known as the “Lunapark”, a show programme, and dancing to music provided by the RTL DJ: Even back then, there is no lack of great ideas. However, the oil crisis forces a break of two years, after the race had already been interrupted for eight hours in 1973. The racing only resumes in 1976, when the organisers turn to privateers, for whom production-based classes are introduced. Despite this, 1978 winners Fritz Müller and Herbert Hechler are once again powered by a works engine in their Porsche Carrera. In the same year, a team of VW privateers shows great vision and runs a diesel Golf. Thanks to its low consumption and extreme reliability, it finishes 33rd in a field of 113. “Endurance races are a fruitful area of application for diesel cars,” says team principal Horst von Gundlach afterwards. “Organisers and competitors should take this into account in the future.”

The next interruption in the timeline comes in 1983, when the start/finish area is rebuilt. However, big names turn up to bid farewell to the “old” Südschleife and the historic pit lane facilities. Even newly-crowned Formula 1 world champion Keke Rosberg: “I have an awful lot of memories of the Ring. For this reason, I really wanted to drive in this final race – whether world champion or not.” His start alongside world rally champion Ari Vatanen in an Eichberg Capri ends with a DNF. However, in Klaus Ludwig, victory goes to a German star who can already point to a win in Le Mans and two DRM titles. For the next three years, the privately run Budde BMWs have their nose in front, before Ludwig, Klaus Niedzwiedz and Steve Soper bring an end to that run in 1987 in a works-run Texaco Ford Sierra Cosworth.

DTM drivers and cars, both on the support programme and in the race itself, give the event another boost from 1987. The crowd passes 100,000 spectators this year for the first time, and Emanuele Pirro, Roberto Ravaglia and Fabien Giroix produce the first Schnitzer victory – the first of four wins in a row for the BMW M3. The subsequent boom years can also be felt in the field: In 1990, 30 of the 250 applications must be turned down. During these years, only Konrad Motorsport is able to break BMW’s dominance, with victory in a Porsche Carrera in 1993. And BMW continues to win when regulations are implemented to slow the most powerful cars and champion production-based technology. This comes at the expense of spectators and competitors: In 1996, only 140 cars are in action. However, fans do witness the first of two victories for Johannes Scheid and Sabine Reck (later Schmitz) in the “Eifelblitz” BMW. The next BMW coup comes in 1998 with the first international race win for a diesel car.

With a far more liberal set of regulations, which entices attractive cars, more participants and big crowds, the turnaround is accomplished. Marc Duez was still sat at the wheel of the victorious diesel BMW in 1998, now he is driving the dominant car of this period – the Zakspeed Viper. 1999 produces the first of three wins. To the surprise of many, Bernd Mayländer, Uwe Alzen, Altfrid Heger and Michael Bartels did manage to deny the Viper in the Phoenix Porsche the following year, but the snake bit back to win in 2001/2002 and was a regular at the front end of the field until 2007. However, the opposition is improving all the time and produces a number of unforgettable cars. From 2003 to 2005, victory goes to Open and Schnitzer BMW.

The next eight(!) years are dominated by just two teams: Manthey Porsche and Schnitzer BMW alternate on the top step of the podium from 2004 to 2011, constantly driving each other to new highs. With his victory as team principal, Nürburgring legend Olaf Manthey finally claims his first win in 2006. A further six are to follow by 2021. “2008 was possibly the best,” he recalls later. “At the start, we were stationary for almost 17 minutes with a cracked bracket on a water pipe. Then the guys drove like gods. At half past four in the morning, we were out in front, and we went on to win in the end.” Schnitzer countered with the M3 GT2 in 2010, before the start of the GT3 era.

The next Phoenix coup comes in 2012: The Eifel-based team wins the 40th staging of the 24h with an Audi R8 LMS ultra, and from now on it is the GT3 cars that set the pace. In particular, Audi, BMW, Mercedes-AMG and Porsche produce some fierce and ultra-exciting battles. They are repeatedly joined by “exotic” cars, primarily from Ferrari, Lamborghini and Glickenhaus. The distance record is broken in 2014, the most driver changeovers (33) are recorded in 2015, before 2016 and 2017 treat fans to incredibly thrilling finales. And there is no sign of the excitement stopping. In 2022, the thing that organisers and competitors have had to wait two long years for is finally happening: Spectators are back at the circuit and, in time for the big anniversary, promise to return the 24h Nürburgring to the event, for which it has become internationally renowned: The biggest international race on the longest, most beautiful and most spectacular racetrack in the world!

24h history at a glance

1979 – 1981
Only touring cars are now permitted to start, no GT3 or Group 3 cars anymore. For two years, the Ford Escort RS2000 dominates, before a Capri wins in the third year.

1982 Star line-up at the final race on the “old” Ring. Victory goes to Gartmann/Ludwig/Niedzwiedz in the Gilden-Kölsch Capri 3.0.

1983
No 24h while the Grand Prix Circuit is being constructed.

1990
Boom phase: The ADAC receives 250 applications for the maximum 220 places available for practice. 180 cars are permitted in the race.

1992
In a legendary “water fight”, rally icon Walter Röhrl is in a different class in the night. Despite this, he has to settle for P3 behind the BMWs of FINA and Schnitzer.

1998
A BMW 320d achieves the first diesel victory ever in an international race.

2000
Formed one year previous, the Phoenix team immediately makes a name for itself with victory at the 24h race in a Porsche 996.

2003
Phoenix is responsible for the Astra V8 Coupé that claims the first, and still the only, victory for Opel.

2010
Only Schnitzer can stop Manthey: Armed with the M3 GT2, the Bavarians claim the last of ten victories for the M3 at the 24h since 1989.

2012
The first victory for an Audi at the 24h is also the first overall win for a GT3 car – since then, this class of car has dominated the action at the front of the field.

2015
The World Touring Car Championship WTCC makes its first appearance on the programme. It has been a second highlight of the event ever since – now in the form of the WTCR.

2016
Thrilling finale between Black Falcon and HTP in a glorious top-four shut-out for Mercedes-AMG.

2021
In the second year of coronavirus, fog makes for the shortest 24h ever. The Manthey team claims its seventh victory: Record!