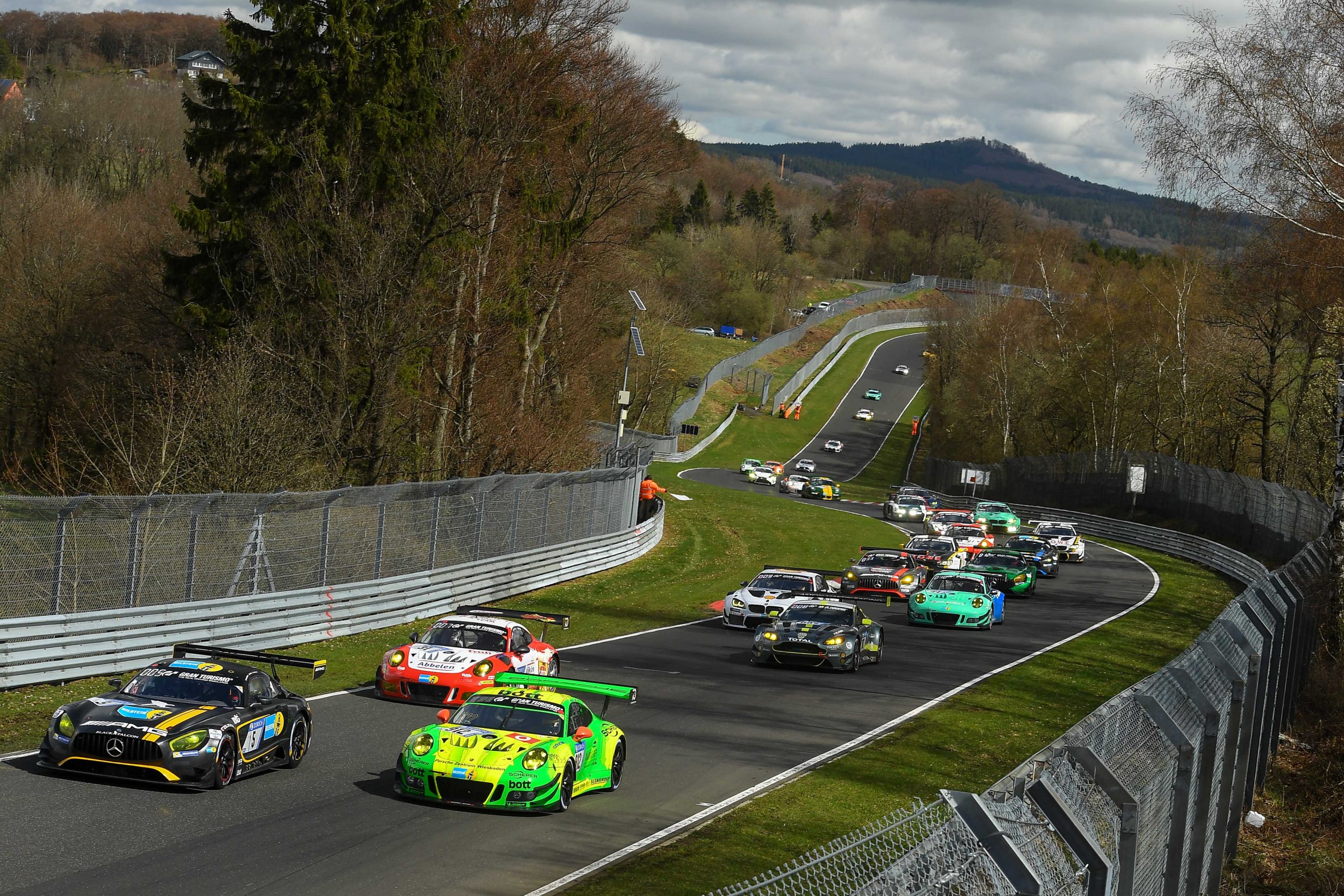 From 18th to 19th May, in the 24h Race Qualifying Race at the Nürburgring Nordschleife, it’s all about preparing for the ADAC TOTAL 24h Race. More than 100 teams have registered on the entry list to use this last opportunity to prepare for the season highlight, among them 30 cars in the categories with overall-win potential. This group features the top teams and drivers representing the Audi, BMW, Mercedes-AMG and Porsche camps as well as the more exotic GT3 squads, such as the Ferraris and Lamborghinis or the Nissan and Lexus teams. The team to beat will contest the race with the #1 decorating their car: Manthey racing, the reigning champions, will provide last year’s winners – Richard Lietz (AUT), Nick Tandy (GBR), Frederic Makowiecki and Patrick Pilet (both FRA) – with a Porsche 911 GT3 R. The four drivers already proved to once again be in great shape, this year, by winning one of the VLN rounds in the run-up to the 24h Race. Tickets for the ADAC Total 24h race prologue are available from €15 (day ticket) to €25 (weekend ticket) and can be purchased at the Nürburgring ticket shop (www.nuerburgring.de).
The battle for the win in the longest race on the longest and greatest racetrack in the world once again will be contested by works squads and works-supported independent teams. Following an impressive performance the reigning champions once again have to be regarded as favourites. In the third VLN round, three Manthey Porsches 911 made for a podium lock-out. And although the third place 911 lost its podium due to a receiving a belated time penalty, the tradition-rich team underlined its ambitions. “A good motor-racing day,” Richard Lietz who won the 2018 edition of the prestigious event together with his team-mates said with understatement. “We could test a lot of things and learned a lot. And we are really happy with the result. First, second and fourth places for Manthey Racing – a truly rare achievement. It was a good preparation for the 24h Race and nothing broke. Therefore, it was a perfect day.” The sister car secured the pole but due to a few litres of fuel too much in the tank the 911 GT3 R #911 received a several-second time penalty and lost its podium. Consequently, Kévin Estre had mixed emotions, after the race. “The car ran really well and we were able to clinch the pole,” the native Frenchman said but added: “To be able to win we reduce the number of mistakes. But we could test many things and gathered a lot of experience. Now we will keep on working for the great race in June.”
Tough competition on the 24h-Race grid
Nonetheless, the reigning champions will have to try hard if they want to repeat last year’s success and this applies to both the 24h Qualifying Race and the season highlight a month later. After all, the grid features competitive and ambitious rivals, for instance the teams representing Mercedes-AMG. In the preparation period, Black Falcon proved to be particularly strong. Last year’s 24h Race Qualifying Race winners will enter several top cars, this year. The squad around Adam Christodoulou (GBR), Maro Engel (MCO), Manuel Metzger and Dirk Müller (both CHE) ‘inherited’ third place in the third VLN round. At the end of the day, the Meuspath based team always has got what it takes to secure top-class results. At the same time, BMW always will be represented by competitive cars, in the Qualifying Race. Vehicles such as the two Rowe Racing M6 GT3. The team secured pole in the VLN season opener and finished first and third in the race. And in the second VLN round that had to be stopped short after the start as the winter had returned to the Eifel, another BVMW team, Schnitzer, held the lead when the race was red flagged. In the 24h Race Qualifying Race, Augusto Farfus (MCO), Martin Tomczyk (Kolbermoor) and Timo Scheider (AUT) will race for the team from Southern Germany. A top-class line-up underlining the team’s ambitions. And don’t forget: up to last year, the five-time 24h Race winners were tied for the top position in the record book with Manthey Racing. But now, Manthey Racing are the sole leaders with six race wins and the BMW squad is keen on scoring the equaliser.
24h Qualifying Race: 24h feeling ‘en miniature’
It comes as no surprise that virtually all the top teams are going to also contest the 24h Race Qualifying Race: after all, this race weekend represents the perfect preparation for the season highlight in June. On Saturday (18th May), the teams are offered the chance of testing and adjusting their cars for three hours on the GP circuit before they go out at for the practice session at the Nordschleife (from 12:15hrs CEST, 11:15hrs BST). In the evening, at 18:45hrs CEST, the time schedule features the 2.5-hour qualifying session that will end in the late evening, thus providing the same conditions the teams will have to cope with in the 24h Race. Apart from the Qualifying-Race action, the Saturday schedule also comprises an RCN performance test (start 14:30hrs CEST) and in the morning, the Nordschleife will be the venue of a GLP. On Sunday, however, it will be all about the Qualifying Race. The second qualifying session will begin at 08:30hrs CEST and afterwards, the fastest teams will battle it out for the pole in the individual time trials. The six-hour race will be started at 12:00hrs CEST. In addition to the race action, the Falken Drift Team also is going to entertain the visitors: in the Nürburgring paddock, the experts for spectacular driving physics will demonstrate their stunning car control throughout the weekend.
>> Entry list 24h qualifying race 2019 (pdf)